The Sadc Poetry Festival 2010, organised by Artsinitiates-Southern Africa will be held in Gaborone, Botswana at Alliance Francaise de Gaborone from 27 to 29 August 2010. This year's theme will be My Voice, Your Hand while the festival, which is funded by Prince Claus Fund, will explore poetry-art or Ekphrastic poetry. Poetry-art is where poets and visual artists work together either basing each other's art work on the poem or a piece of visual art. The festival that was launched in Windhoek last year will this year attract a visual artist and a poet from each Zambia, Zimbabwe, Namibia, Lesotho, Swaziland, Mozambique, South Africa, Angola and several from the host country, Botswana. Zimbabwean journalist and author, Wonder Guchu is the founder of this festival. 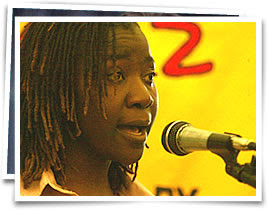 09hh00 – 10h00: Presentations on the state of poetry country by country reports (to be facilitated by Memory Chirere)

10h00 – 11h00: Exploring the visual arts and how they function: are they a technique or an art? (to be presented by Raphael Chikukwa)


29 August SUNDAY
09h00 – 13h00: Taking the art to the people – recitations around selected venues in Gaborone (with Joseph Molapong)


30 SEPTEMBER MONDAY
09h00 - Breakfast and departure
Posted by kwaChirere at 9:10 AM No comments:

from Emmanuel Sigauke with love 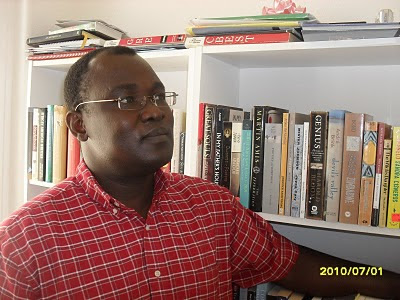 By the time Brutus stabbed me, Mukoma had already left to fight with the Mhere boys. Earlier in the morning, at home, he had told me that he just wanted to hear my English, and to see if I had the right gestures for it, adding that he was not interested in the prize-winning ceremony that would follow the big performance, nor did he care about meeting my teachers to discuss my progress. I don’t think when he left I had finished dying because even before Mark Anthony arrived on the scene, half the audience had left the play and had gone to watch Mukoma’s fight. At first, I had no idea what was happening, until Miss Mukaro, the teacher who had directed the performance, signaled Mark Anthony, acted by Chari, to stop talking, walked to where I lay dead and whispered, “Caesar, your big brother.” I sprung up and looked where Mukoma had been standing and saw that he was gone…

**** so goes the first paragraph of my favourite story in Emmanuel Sigauke’s forthcoming collection of short stories. Right from the first line, you get hooked and the story races with you in its jaws. I like the concept of ‘a fight inside the insides of the fight’ used in that story. Emmanuel Sigauke may not admit now, but when it finally comes out, this collection of short stories tentatively called ‘Mukoma stories’ is going to be his major project to date. He has been at this script for years now and I think he is close to releasing it…. The stories revolve around a teenage boy and the escapades of his roguish elder brother (mukoma). The boy has had to become a thinker and not a boy, in order to survive because mukoma is as unpredictable as his mortar mouth. These pieces come very close to the skin, akin to the short stories of Marechera, Chinodya and Naipaul. Manu, let go! You have an extremely exciting script.
Posted by kwaChirere at 8:50 AM 2 comments: 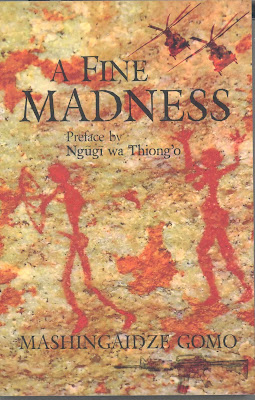 Title: A Fine Madness
Author: Mashingaidze Gomo
Publisher: Ayebia Ckarke Publishing Limited, UK
Isbn; 978-0-9562401-4-9
174pages
When an excited friend brought to me the manuscript of Mashingaidze Gomo’s A Fine Madness, at first I thought that there was something unfinished (and spooky too) about it as the jagged lines ran and ran seemingly incongruous. But I began to sense that the script was deceptive and I could have been fooled into dropping it. I started reading it in the middle of the night and I was alone and I never went to sleep afterwards. I felt that the room was peopled by all the heroes and traitors we read about in African History.

The other time when a work of art had slowly dragged me to its depths was with Brathwaite’s The Arrivants. The second time was with Cesaire’s A Notebook of the Return to My Native Land. The third was with Armah’s Two Thousand Seasons. You pick a book, saying, ‘What do we have here?’ Then – gone!

With such works of art, the act of reading becomes a long and wide dream in which you are taken through the paths of human joy and agony, ending in a whirlpool of emotions. You want to curse. You want to laugh. You want to revenge. You want to walk about the room. You want to go away and be mad. You want to forgive and be forgiven.

Immediately after, I asked to see the author because I had been told that he was a gunner with the Airforce of Zimbabwe. I wanted to see him in order to believe that he had indeed written A Fine Madness. Then the man I saw was a soft spoken gentleman. It was really an anticlimax! Later, I was to conclude that the Mashingaidze Gomo case is interesting in so far as he doubles up as a man of action and a philosopher. He lives at the cutting edge of history but he is able, meanwhile, to reflect on the African condition.

Then I gave the script to a colleague, a professor of Zimbabwean literature. He threw the script among his old papers saying, ‘We will see.’ He was used to many pretenders over the years that showed him things that they called stories. Things that ended up eating up one’s time for nothing. Then one day the professor came to me in the morning with red eyes and said, ‘I didn’t sleep, last night’. It was because he had made the mistake of reading the first pages of A Fine Madness. He was not able to stop!

We were both agreed that this script should be published because A Fine Madness is a charmed, mad and maddening prose poetry in which an armed man snoops into Africa’s history of deprivation and strife to do the painful arithmetic. Meanwhile, the Congo civil war of the late 1990’s rages on like a monstrous fire, eating and allowing brother and sister to get eaten by the syphilis of the West’s relentless desire to plunder. At the centre of this story is the anger and the question why the West is always at the centre of African conflicts, siding with one side and arming it against the other, as in the 1998 civil war in the Congo.

The narrator who is out at Boende in Congo sometimes reflects on his relationship with Tinyarei, an African beauty back home in Zimbabwe:

"The woman I am missing now is a beautiful woman
An older woman aged in beauty
A beauty that hangs on even as age takes its toll
Lingering on like a summer sunset… reluctant to go
A beauty digging in…making a last stand around the
eyes where her smile is disarming.
I missed Tinyarei with a wretchedness that was like
madness
A very fine and enjoyable madness
And it always feels pleasant to miss a woman
Sometimes it is even better to miss than to be with her
And at Boende, it felt nice to miss Tinyarei..."

But, Tinyarei is a lover, a mother, a trophy to be won and sometimes she stands for mother Africa herself.

Sometimes the narrator watches the Congolese men, women and children dance to Ndombolo and wonders why poverty sucks and stinks and erodes self confidence. The Congo war which pitied brother against brother and neighbor against neighbor, gives Mashingaidze Gomo opportunity to listen to human voices and messages from the Congolese flora and fauna and come up with multifaceted pan African philosophies. He also wonders why we often give in easily, why we think less about our dignity, why we are turned against the real substance and asked to take in abstract values, why we don’t wonder why we are considered ‘the whiteman’s younger brother’… and why… and why?

I agree with Ngugi Wathiongo when he says (in the preface) that this prose poetry book is not only about ‘the horror and loneliness of war; but also the beauty of resistance’ and that Mashingaidze ‘can yoke the most contradictory into a searing insight.’ And yet I do not agree with Ngugi that the emergence of postcolonial dictatorships and their actual relationship to the Western corporate bourgeoisie’ can always be explained better by always taking a class perspective. This book’s forte surely transcends explaining the emergence of postcolonial dictatorship in Africa. A Fine Madness dwells on the varied patterns of the relationship between the North and the South from before colonialism to date.

A Fine Madness is the best book that I have read this 2010!

(Reviewed by Memory Chirere)
Posted by kwaChirere at 9:08 AM 1 comment: 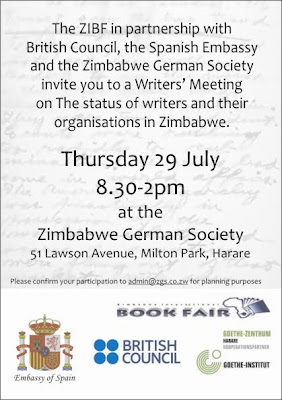 9. Virginia Phiri
The interim committee will meet on Monday 2 August 2010 at the Zimbabwe German Society at 1430hrs to 1600hrs to map the way forward. From 9am to 1pm, Friday 27 August 2010, all writers interested in the new organisation for writers are invited at the ZGS for a plenary session.
Posted by kwaChirere at 9:14 AM No comments: