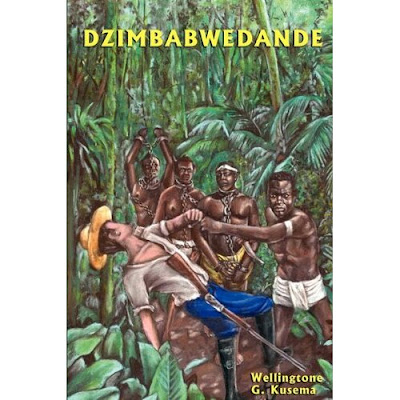 Wellingtone Kusema has made history by publishing probably the longest novel in the Shona language to date at 108 264 words! Dzimbabwedande, published by Heritage Press is a gigantic 348 paged old world novel about Dumbetumbe’s heroic exploits. This is a very important novel about the evil machinations of the Portuguese during the Mutapa Empire, stretching from the Highvelds down to the Indian and the Atlantic oceans. Here you read about the slave trade, power struggles, love and betrayal. This is a massive show of confidence in the Shona language. For me, Dzimbabwedande could easily pass as the greatest novel by a Zimbabwean in 2011.
Posted by kwaChirere at 7:39 AM 3 comments:

My crowning moments in 2011 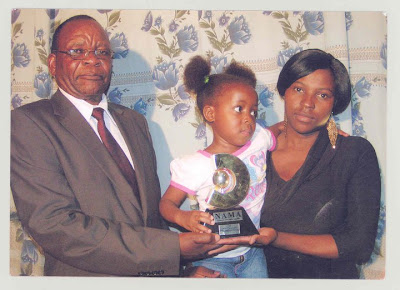 Above, my wife and daughter, Shasha received the NAMA Award on my behalf for my latest book 'Toriro and His Goats' from prominent novelist Charles Makari in February 2011. I am told that it was a colourful event. I was abroad on a work-leave. On 8 and 9 October, I read from Tudikidiki (in translation) to a capacity crowd at the Blantyre Arts Festival, Malawi. It was my first time in Malawi and my first to be in a foreign country whose major language I speak fluently! On 29 November, i presented a paper on 'manhood in the novels of Chenjerai Hove' at 'Traditions II: Everyday Lives of African Men' conference held in Addis Ababa. It was held in the historic Africa Hall. To crown it all, my short story book, 'Somewhere In This Country' has finally found its way onto the Advanced level Literature in English syllabus in my own Zimbabwe!
Posted by kwaChirere at 5:21 AM No comments:

the ZWA logo and some information

Following the election of a substantive board of the Zimbabwe Writers Association (ZWA) on June 4, 2011 June 4 2011, dear members , take note of the issues below and regularise your membership by getting in touch with the secretary and treasurer:

a.Ordinary Membership US$10,00. Ordinary membership shall be reserved for individuals who qualify on account of being bona fide authors of Zimbabwe, new or established. Individuals shall willingly join even if writer organisations to which they are already members may wish to or have joined ZWA on Affiliate status. Each ordinary member shall have one vote at any general meeting of ZWA.

b.Affiliate Membership US$20,00 Affiliate membership shall be reserved for willing and recognized Zimbabwean writer organizations and/or associations whose objectives serve the interests and welfare of writers of Zimbabwe whose application for membership is approved by the Board. This shall apply to organizations which seek to participate in the work of ZWA on behalf of their members. Each affiliated member shall have one vote at any general meeting of ZWA.

c.Honorary Membership pay in form of donations. Honorarary membership shall be reserved for members of the cultural community who have a proven interest in the promotion of Zimabwean Literature and the arts in general as well as being supportive of the Organization’s goals and who may add value to it through their links with the funding or business community. Normally they are invited to join by the Board. Honorary members shall not be entitled to vote.

1. ZWA email address: zimbabwewiters@gmail.com
2. ZWA is now in possession of a National Arts Council of Zimbabwe Registration Certificate
3. ZWA now has a Logo (indicated above)
4. ZWA objectives are explained in the Constitution previously circulated to you
5. ZWA’s By-line: A WHOLE WORLD IN A WORD’
6. Treasurer’s email for joining and all payments: sbeatrice033@gmail.com, 0712 401 787
7. Secretary’s email and cell number: memorychirere@yahoo.com
Posted by kwaChirere at 3:27 AM No comments:

A picture from the last ZWA meeting. 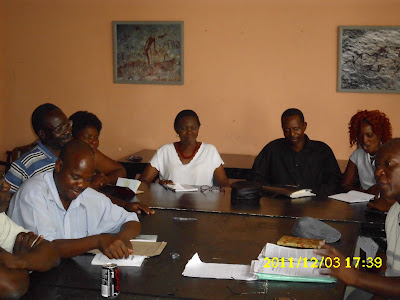 Posted by kwaChirere at 8:10 AM No comments: 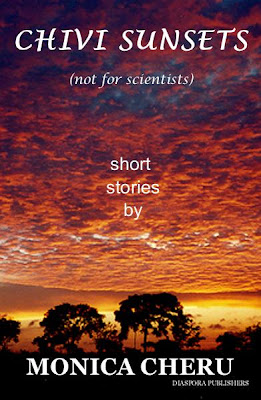 I can announce that Monica Cheru’s collection of short stories; Chivi Sunsets: Not for Scientists (above)has finally been published by Diaspora Publishers in the UK.

In my view, these stories are in the league of Wonder Guchu’s very fascinating,My Children, My Home published in 2007. Where other contemporary short story collections from Zimbabwe are largely concerned, in various ways, about the socio-political breakdown, Chivi Sunsets and My Children, My Home are about matters located beyond and above this decade of crisis. In Guchu and Cheru’s short stories, the individual fights perceived enemies and rivals using extra realist actions like sending familiars and curses that harm physically.

In ‘On the Road to Damuscus,’ from Chivi Sunsets: Not for Scientists, a new teacher, a Mr. Muti is very keen on corporal punishment, hitting his pupils for every little mistake they make. The rural community is very annoyed but the proud Mr. Muti continues to brutalise his pupils. One day, as he cycles to his school from the nearby shops where he is apparently in love with one of the shopkeepers, a whole baboon appears from the bush and jumps onto his carrier. Mr. Muti cycles on, heavily terrified. The baboon asks him: “Mr. Muti, why do you beat the children so?” and Mr. Muti does not reply because he is shell shocked. The baboon continues: “To make them pass? Should they fail, what concern is it of yours, as the children do not belong to you? Anyway, since you started your floggings, how many of them have passed? Ponder on it my wise fellow.” Having delivered its message, the baboon nimbly jumps off the bike and saunters into the tall grass on the roadside!

Eventually Mr. Muti flees the school and in his next school, he never raises his hand to beat up any school child.

He has been changed indeed by this ‘Road to Damascus’ event. Just like in Wonder Guchu’s ‘Garikayi’, this story uses a familiar in the form of a baboon. Equally, where there is a conflict and circumstances do not allow it for people to meet and converse, such things happen. The community considers Mr. Muti way above admonishing because he is far more educated and ‘sophisticated’. In fact, before the baboon incident, other familiars like the bat and the owl had been sent to him but he does not heed.

The narrative is on the side of the community and the baboon because when Mr. Muti leaves: ‘a new teacher comes along and is told the tale of Mr. Muti so many times that he keeps his hands to himself. Eventually the community realizes the value of education and the children begin to pass their exams. Rods reappear but any over-zealous teacher is reminded of the baboon. No one ever claims to have sent the baboon to Mr. Muti. The baboon is never seen by any other person.’

Even in his new station, Mr. Muti never assaults any pupil. He has learnt through the shock that he has received. In addition, he may not be able to narrate this story and be believed. He has been isolated in his new knowledge and that is enough punishment.

This kind of writing (from Cheru and Guchu) as Flores Angel says, helps the writer ‘to reach beyond the confines of realism and draw upon the energies of fable, folk tale, and myth while maintaining a strong contemporary social relevance’ and that ‘the fantastic attributes given to characters in such stories—levitation, flight, telepathy, telekinesis—are among the means that magic realism adopts in order to encompass the often phantasmagorical socio-political realities of the contemporary world.’

Monica Cheru’s title for her short story anthology, Chivi Sunsets: Not For Scientists is a mouthful. The word ‘Sunsets’ assumes that these stories happen during the night or that they are associated with darkness and maybe more specifically, these stories explore the machinations of evil. The second part of the title, ‘Not For Scientists’ suggests that these stories break all the rules of our real world. These stories ‘defy physical laws, including the laws of gravity’ as George Kahari says about the romances of prominent Shona writer, Patrick Chakaipa.
Posted by kwaChirere at 1:18 AM 4 comments: