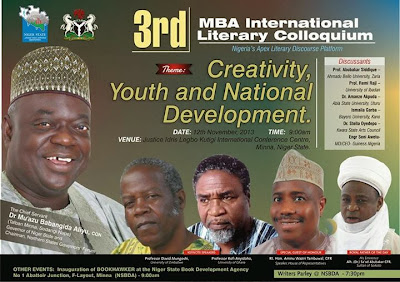 
Part of the letter to Mungoshi from Professor Mohammed Kuta Yahaya, the Commissioner, Ministry of Information, Communication and Integration dated October 17, 2013 reads: “…as a universal scholar whose voice appeals to the global audience, on behalf of the Government and people of Niger State, we write to invite you to be the Keynote Speaker at the event. The theme for this year’s edition is CREATIVITY, YOUTH AND NATIONAL DEVELOPMENT. This is central to young people who will be desirous of listening to your inspiring presentation for the future of our country, Africa and humanity in general.”


Dr.Mu’azu Babangida Aliyu (MBA) is the Governor of Niger State, Nigeria, who has since 2007 continuously made contributions towards the literary development of the country. He is also the Chairman of Northern States Governors Forum comprising the 19 Northern States of Nigeria and the Chairman of the Board of Trustees of Sir Ahmadu Bello Foundation which he co-founded with his governor-colleagues of the North. The foundation was established to immortalise the late icon, Sir Ahmadu Bello, Sardaunan Sokoto and Premier, Northern region.
In 2007, he sponsored a reading campaign, ‘Read-To-A-Child’ programme in the 25 Local Government Areas of the state, sponsoredthe 1st Northern Nigeria Writers Summit in 2008 as well as the Annual International Conference of the Association of Nigerian Authors in 2009. He followed it up with a Ten million Naira grant for the association to establish Nigerian Writers Series (a replica of the defunct African Writers Series). Similarly, he donated a 23 hectare land for the construction of a Writers Village. His wife is currently sponsoring teen authorship scheme in 5 states of the federation. To further institutionalize the business of creative writing in the state, he created Niger State Book Development Agency in December, 2012, which is charged with appropriating book and literary matters in the state. This is the only of its kind in Nigeria.


The MBA National Literary Colloquium is another platform he established in 2011 to promote ideas, discourse on literature, leadership and intellectualism in governance. The first edition had poet Odia Ofeimum as the Guest Speaker while Prof Wole Soyinka was the 2012 Guest Speaker. This year's edition comes up on November12 in Minna, Niger State, Nigeria.
David Mungoshi's novel, The Fading Sun won Zimbabwe’s National Arts Merit Award (Nama) in the Outstanding Fiction category in 2010. David Mungoshi was born in Bulawayo in the enriching vicinity of some of the key exponents of township Jazz music of Zimbabwe. Some of his major literary works are Broken Dream and other Stories and Stains on The wall. His forthcoming novel is called Catalogues.
Posted by kwaChirere at 5:14 AM No comments: 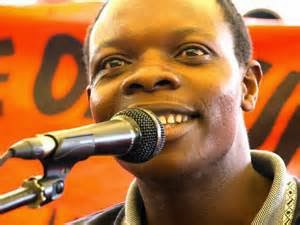 Tinashe Muchuri, staff writer at Parade; a leading Zimbabwean magazine and current Secretary General of the Zimbabwe Writers Association, is the winner of the coveted Delta Corporation Arts and Entertainment Journalist of the year for 2012-13 in the  National Journalism and Media Awards (NJAMA).
Muchuri penned the winning entry called: ‘What do Zimbabweans Read?’ Appearing in the Parade’s relaunch Edition of December 2012, it dwelt on the important but highly neglected subject of the literary arts.


Part of the judges’ citation goes: “The reporter interrogates Zimbabwe’s reading culture and asks the fundamental question – What do Zimbabweans read? The story brings out interesting facts about the country’s reading culture, while successfully tackling the subject and bringing out the challenges in an engaging manner. The article, which also taps into diverse expert sources, is well-written and well edited and captivates the reader. It is evident that the reporter committed some thought, time and effort in developing the story.”

Previous winners in the same category include 2004: Limukani Ncube, 2005: Wonder Guchu, 2007: John Mokwetsi, 2008: Shame Kanyumwa, 2009: Godwin Muzari, 2011: Nkululeko Sibanda and 2012: Kenneth Matimura
Muchuri himself says that he is excited. “I feel that there are some eyes away from where one toils that look and recognize hard work. On top of that, I have discovered that journalism is like raising a child. It is a task that requires the whole community. This is the result of team work at the ‘Padare reNhau’ (publishers of Parade Magazine.) My editor, Ray Mawerera deserves respect too, for always plucking out all the weeds from my stories and for believing in me.”
Muchuri walked away with a certificate, hamper, some money and a floating trophy.
Muchuri is an actor, performing poet and novelist. His forthcoming work comes out before Christmas 2013 through Bhabhu Books of Harare. It is a novel entitled Chibarabada. It is a unique and amazing novel script in the Shona language, threatening to take the Shona narrative way beyond Kunyarara Hakusi Kutaura? and Mapenzi in matters of style. Revolving around chibarabada, an illicit brew, the novel proceeds in the form(s) of first person, second person and third person narratives, (all in one script), creating the impression of a whole community talking at once to itself and beyond.
+Memory Chirere
Posted by kwaChirere at 8:21 AM 2 comments:

Marechera vs Zvobgo at the first Zimbabwe Book fair


Hon. Minister of Primary and Secondary Education, Mr Lazarus Dokora
Diplomats and other distinguished guests and supporters of ZIBF
The Chairman and members of the General Council of the Zimbabwe International Book Fair Association, and Honorary Members
And the Chairman and members of the Executive Board
Colleagues and Friends, Ladies and Gentlemen


May I just begin by saying Makorokoto, Amhlope, Congratulations to Minister Dokora on his appointment. The ZIBF is a suitable start to your service… We look forward to advances in education under your leadership, and of course education needs people such as the participants here, that is writers, publishers, illustrators, editors, printers, booksellers, students and youth … and readers. I should emphasise that this is a well-developed and talented industry in Zimbabwe, but it is a business and the supply chain needs to be hard working and efficient, and also needs to be able to eat. It is a dynamic industry that has been, and can be again, a significant contributor to the Zimbabwe’s economic recovery.


May I also say to Musa Zimunya, the Chairman of the Executive Board of the Zimbabwe International Book Fair Association, that you and your colleagues are doing a remarkable job here under your leadership, with vision and substance, with a holistic perspective that is inclusive, not exclusive, and you should be warmly congratulated and strongly supported. I hope that the private sector and the donors and the minister will take note…


I have been asked to talk about ZIBF at 30 since I was involved in the initiation and development of the Zimbabwe International Book Fair in 1983, with my late husband, David Martin, who was the Founding Director. In reviewing my archives, I found a document that said I was the treasurer, so I suppose I was tasked with raising the funds, we certainly didn’t have much to spend when we started. There were other key people involved and I will come to that in a moment but first I want to reflect on your theme for this year -- ZIBF@30: Enabling Creativity, Writing, Publishing and Reading for Africa’s Growth.


I think the theme for this year, when the book fair is 30, says it all, and the theme for this year actually removes the need for a keynote address, because it tells us why the book fair was founded… to enable creativity, writing, publishing and reading for Africa’s growth.  So, happy 30th birthday, the vision is still very much alive and growing.