(picture: Shimmer Chinodya)
The literary community of Harare gathered last night at the Zimbabwe- Germany Society to launch Shimmer Chinodya’s German translation of his 2007 Noma Award winning novel, Strife. The German version is called Zwietracht and was translated from English by Dr Manfred Loimeier under the Afrikawunderhorn series.

The Noma Award for Publishing in Africa is considered the most prestigious literary award in Africa. Published by Weaver Press in Harare, Strife has moved the frontiers of the Zimbabwean novel in the ways in which it explores individual turmoil from inside of the nucleus family. The concept of ngozi (the avenging spirit) is explored in far greater detail than what has occurred in any Zimbabwean creative writing in English. Part of the citation of the Noma jury goes: ‘… the brilliance of this powerful and haunting story, in notably innovative form, brings a new dimension to African writing.’

In her introductory remarks German student, Franziska Kramer described Strife as ‘a family epic’, insisting that it will remind German readers of Thomas Mann’s Buddenbrocks.

Shimmer Chinodya has been one of the most outstanding writers from among those who became prominent after Zimbabwe’s independence in 1980. His writing tends to dwell on the individual in the family in the fast changing times in Zimbabwe.

Simmer Chinodya was born in Gweru in 1957. His first novel, Dew In The Morning(1982) is about Godi’s parents leaving town for the rural areas where Godi undergoes a lot of transformation as he observes the rural community’s life and its reliance on the forces of the changing seasons. Godi tries to come to terms with the witchcraft, ghosts and all the materials that erupt from the underworld.

In Farai’s Girls (1984), Chinodya delves into teenage hood. Farai is a teenager, who like other teenagers’ is growing up to the knowledge of the dictates of his passions. Every girl that Farai dates becomes a school.

In Child of War (19850), written under the pseudonym, Ben Chirasha, Chinodya explores a young man’s involvement in the Zimbabwe’s liberation war of the 1970’s liberation. But his more powerful and maybe more thrilling war novel is Harvest of Thorns (1989). The craftsmanship portrayed here is very high. It is, maybe, Zimbabwe’s most exciting book on the war of liberation by a non combatant writer. Harvest of Thorns put Chinodya on the literary map by winning him The Common Wealth Prize for Literature (Africa Region) in 1990.

Chinodya’s short story book, Can we Talk and Other stories (1989) demonstrates Chinodya’s ultimate maturity as a creative writer. Here you find stories that delve on what happens to the human soul as one grows up, as one relates further than one’s father and mother and as one queries success or failure. This collection employs various literary techniques that had never been employed by any Zimbabwean author.

Tale of Tamari (2004) is a novel for young people. A 14-year-old girl’s parents have died and she is left with brother, Kuda in a house with various lodgers. Their greedy uncle constantly eyes the rent money and the house itself and the struggles between him and the orphans span the whole book. This is arguably the first creative work in Zimbabwe on HIV/AIDS which does not harp endlessly on how to die or not die from AIDS.

In (2005) Chinodya published a novel called Chairman of Fools. It became a real curiosity on the Zimbabwean scene because it dwells on an unusual subject, dementia. A prominent scholar slides into madness when he fails, among other things, to manage his success and to keep in touch with the aspirations and desires of his own wife and children.

Shimmer Chinodya is also an author of schools textbooks. His series called Step Ahead: New Secondary school English Course is read in nearly all-Zimbabwean schools. In 1995-1997 he was Visiting Professor in Creative Writing and African literature at St Lawrence University in the USA. He also holds an Honours Degree in English from the University of Zimbabwe and an MA in Creative Writing from Iowa. Strife is the second of Chinodya’s book to be translated into the German after Harvest of Thorns.
(Essay by Memory Chirere)
Posted by kwaChirere at 8:41 AM 1 comment: 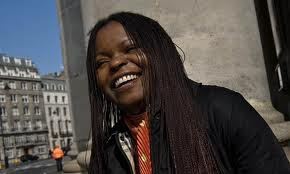 Be There!
Posted by kwaChirere at 8:40 AM No comments:

A rare photo of Marechera and Mungoshi from Ernst Schade 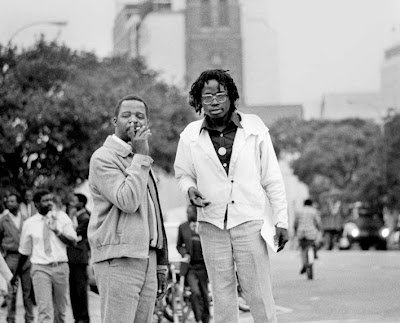 Posted by kwaChirere at 3:57 AM No comments: