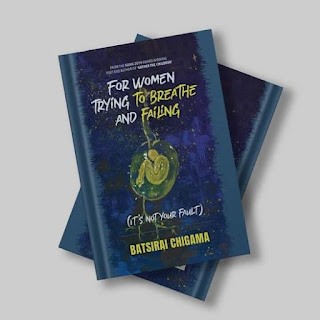 Title: For Women Trying To Breathe and Failing

There are many ways of writing protest poetry. One of them is for the poet to take on that which she abhors, head on. The poet could settle on subjects like politics and violence and get to their roots, sampling their DNA, pointing out the perpetrators themselves etc etc.

The poet could also lambast the way men ill-treat women in general. She could even write against the usual clobbering of women by men for no particular reason. The poet could go round and round until the page is wet. Or, she could grieve all the way, burning a hole that runs from cover to cover.

The poet could then breath in and out, take a walk or make a quick cup of tea for herself. Or, she could just rest and settle like fog upon the earth.

But in this her new book called For Women Trying to Breathe and Failing, Batsirai Chigama has, for me, one very special section called How Love Should Be. In that section, Chigama chooses to protest against man’s abuse of women by actually giving us the alternative man. This is a rare feat! Here is a man that the women would prefer…

In school we used to call that the control experiment!

When a male reader goes through that section, he may definitely come face to face with what he could have been when the world was fresh and the hills were still soft. It is like coming home in the middle of a rainy night to find your better version sleeping in your very bed! When that happens, and you are able to control your nerves, you may see what you could have been and not the brute that you have become. We tend to come into the world too late or too early to be sane.

In one of those poems by Chigama, a woman gazes at a man and thinks, “of all the places (that) I could live, your heart is the paradise I choose.” In another, a woman refers to her man as “a best seller to me” and more specifically, “babe I would carry you around in the duffel bag of my heart, flip through you, slowly grasp(ing) every single word profound…”

Then she describes an imaginary good, lovely and well behaved man with:

“There are some rooms in your palms

Where I feel I belong

These are the kind of men’s palms that women look for everywhere without finding. Those palms with rooms! But that is only the beginning because in yet another poem, the title poem to this section itself, the poet writes about her man’s “gentle softness” and her man’s “dewy kindness that drips each time you look at me and hold me strong in the embrace of each syllable.”

And the man is so good that the woman even admits her own faults, “I am a mess I know, yet the way each vowel curves in your iris is the magnet that centres my universe.” And that electric section of poems continues unabated.

In another piece, a joyful woman reads a book of poems by the window as her caring man wears the apron to prepare a toast for her, roasting a chicken drumstick for her and the sad part is that the man does it that only on Sundays. If he could do it more regularly, the better!

Here you find a man who knows how to spell love even in his sleep. There is also talk about “a man who smiled with his eyes,” causing a woman bloom like a flower in season. That is not even enough because in yet another poem, “ a woman meets her former lover (so that she is able) to touch the wrinkles on his body and realizes that she still loves him even more than before and that it was really “stupid (hat they had) let each other go the way we did.”

Then there is a section called For Women Who Forget To Breathe While Alive, which has poems about how women’s woes affect their private and bodily lives. There are also sections about women failing to survive and another more reassuring section about “women finding their feet.” There is also a section that carries “the random thoughts of a woman sojourner.” Maybe these are about the poet’s feelings at all the different spaces she has visited (at home and abroad.)

And yes, this collection has sections about politics, particularly our turbulent politics and how much we have developed wounds that run deep. Zimbabwe of the recent times goes under appraisal.

This is Batsirai Chigama, unplugged. With this her second collection after Gather The Children, which won the NAMA award 2019, this poet decided to come out more flaming and establishing her identity as a poet about raw feelings and the troubled internal landscapes as experienced by woman and country.

Very ably edited by fellow poet, Ethel Kabwato, with designs by Chiratidzo Chiweshe-Sauro, this book will find a place in Zimbabwean poetry alongside firebrand poets like Freedom Nyamubaya, Eve Nyemba, Primrose Dzenga, Hope Masike and others.