am hunting for a publisher: Tanaka Chidora 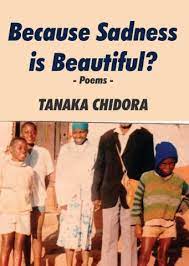 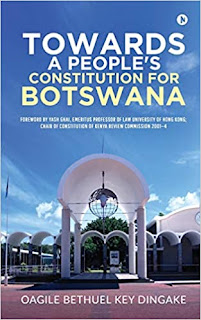 Towards a People’s Constitution for Botswana

WINDHOEK – A constitution developed through wide consultations with the people that it is intended to serve is more likely to be a widely accepted and respected document than one crafted behind the scenes and foisted onto the people. This seems to be the pith or fulcrum of “Towards A People’s Constitution for Botswana”, one of four recent books by Justice Oagile Bethuel Key Dingake.

That Dingake is a remarkable jurist, a brilliant scholar and a versatile writer is incontestable. The former Judge of the High Court of Botswana and now a Justice of the Residual Special Court of Sierra Leone, the Supreme Court of Papua New Guinea and the Court of Appeal of Seychelles, has earned many top honorific titles. Indeed, so many, that legal journalist Carmel Rickard, writing in a Judicial Institute for Africa (JIFA) Newsletter, remarked that Dingake is one of those learned people who pose real problems for those keen on titles!

She was right. Dingake’s other titles include Doctor of Law (PhD), Professor and, lately, Chancellor. This, after he was inaugurated Chancellor of ABM University College in his own native country, Botswana in 2020. He holds, also, a double professorship from two renowned universities: The University of Cape Town in South Africa, and James Cook University in Australia.

“Towards A People’s Constitution for Botswana” is a short but packed book. Only 103 pages. Written in very accessible English, one can say it is easy on the mind.  In fact, it is possible to finish it in two or three days. This is a relief, given most lawyers’ notoriety for writing in tongues.

Writing clearly and simply is one of Dingake’s celebrated trademarks. Small wonder he has been likened to the renowned British judge, Lord Denning; who happens to be one of his mentors. In fact, as I indicated in one review of his other book, some lawyers in Botswana and in the SADC region consider him Botswana’s Lord Denning. And for good reason.

Yash Ghai, Emeritus Professor of Law at the University of Hong Kong and Chair of the Constitution of Kenya Review Commission (2001 -2004), wrote the foreword. In the foreword, Ghai waxes lyrical about Dingake’s mastery of matters constitutional.

Ghai writes: “In this excellent contribution to what he tells us is a debate already under way, Justice Dingake while acknowledging the critical role of the current constitution, … proposes its replacement by a very different form. Judge Dingake, now a judge, also a former teacher and scholar, has proposed, in his scholarly way, a transformative constitution”.

Ghai continues: “As an African scholar who has played some role in the making of a few constitutions in Africa (and other) states, I am very impressed by the way justice Dingake presents his argument”.

I share the above sentiments. It would seem from the introductory sections of this book that Botswana is on the verge of a constitutional review. Such an undertaking may take place early this year according to the announcement made by the President of Botswana, His Excellency Mokgweetsi Eric Keabetswe Masisi. Judged from this vantage point, this publication by a leading constitutional lawyer, judge and intellectual is timely.

Having read the book with extreme assiduity, two major themes dominate this book. These are the need to ensure that the people play an active and informed part in the formulation of the revised constitution and the need for a transformative bill of rights.

In fact, with respect to the constitutional review process Dingake warns that the process should be truly people-driven and should not be hijacked by politicians if the constitution is to endure and be a proud treasure of the people of Botswana.

In arguing for a people-driven constitution Dingake places heavy reliance on Article 21, of the Universal Declaration of Human Rights of 1948, Article 25 of the International Covenant on Civil and Political Rights and Article 13(1) of the African Charter on Human and People’s Rights, all of which emphasise the right of the people to take part in the conduct of public affairs. He also calls for informed participation that must be preceded by a comprehensive civic education similar to the one undertaken in South Africa prior to the adoption of the 1994 democratic constitution.

Dingake advocates for an inclusive process that is not hurried in which civil society, trade unions, youth and women’s organizations play meaningful roles. He calls for a constitution that respects all the elements of the rule of law such as transparency, democracy, human rights, good governance, accountable government and fairness.

He traces the above values to the Magna Carta of 1225, in which liberty featured strongly. He quotes as an inspiration the following excerpt from the Magna Carta: “No freeman shall be seized, or imprisoned or dispossessed or outlawed, or in any way destroyed; nor will we condemn him, nor will we commit him to prison except by the legal judgment of his peers, or by the laws of the land”.

The above line extolling the virtues of liberty permeates Justice Dingake’s thoughts on the constitutional review process.

On the aspect of a transformative bill of rights, Dingake calls for adoption and entrenchment of socio-economic and cultural rights given that Botswana’s current constitution only recognises civil and political rights. He also calls for the establishment of a Human Rights Commission, a Gender Commission and other measures to promote open democracy and an accountable government. He is also very strong on freedom to access information subject only to limitations that are internationally recognized.

In this book Dingake acknowledges that although Botswana’s first constitution has served the country well, the time has come to formulate a more progressive constitution that can guide Botswana’s development trajectory and secure the welfare of the people, whilst at the same time serving as a guide to other countries thinking of reviewing their constitutions.

As a comparison the book discusses in some detail the experiences of other countries in Southern Africa that include Zambia and Zimbabwe. Dingake expresses the hope that Botswana can avoid some pitfalls or deficiencies of the constitutional review process in some African countries.

Having read this book and learnt much about the best approach to constitution making, I recommend it to politicians, members of civil society, trade unions, media practitioners and members of the public in Africa and beyond. My only beef with this remarkable book is with its modest title, which might give the arguably inaccurate notion that its lessons and ideas are uniquely applicable only to Botswana, when the author might have penned a global blueprint for making constitutions!

I am convinced that if Batswana can read and implement some of the suggestions in this book, Botswana will in due course have one of the most celebrated progressive constitutions in our region and indeed in the whole world. Politicians, civil society in Botswana, trade unions, women and youth formations and members of the public would do well to get themselves a copy of this book as part of the preparations of the constitutional review process Justice Dingake discusses in this book.

*Moses Magadza is the winner of the SADC Media Award (2008), a freelance journalist and a PhD student with research interests in framing of key populations by the media. He is based in Windhoek, Namibia.

Posted by kwaChirere at 5:34 AM No comments: