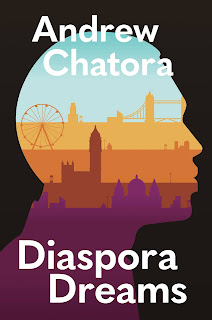 There are strong indications that the UK based Zimbabwean writer, Andrew Chatora, is going to release his debut novel, Diaspora Dreams with Kharis Publishing in the US very soon.

On noting the subject matter, I was initially tempted to assume that this new author would take the usual route about a young Zimbabwean coming to the UK because of the crisis back home.

Ever since Dambudzo Marechera of The House of Hunger’s “I got my things and left…” of 1978 to the present, the central character of such novels, who is almost always a young fellow, flees home and country in search of an alternative existence. After that, he becomes double faced, constantly checking on the new ground while peeping at the political goings on back home. He then to then becomes a keen political eye.

However, Chatora takes a very courageous and startling detour with this new book. The main character, Mr. Kundai Mafirakureva, is following up on his teacher wife, Kay in England. Her pregnancy is now very advanced and Kundai has come to be with the beautiful Kay in her time of need, something far away from Chikwava’s single minded man in Harare North.

But Kundai walks late. He does not know that he has in fact come to ‘school.’ He does not know that he is coming to the UK to learn about what women can do, sometimes, to their unsuspecting men when the survival instincts rise above love ties. If you are used to the many novels that dwell on how men typically abuse women, then this book is something else.

From the moment Kundai from  N133A Dangamvura- Mutare, manages to secure a visa at Heathrow, a whirlwind takes over. Husband and wife are on new turf. This is the UK. Their constant power struggles over which relatives should receive money from the UK and who should not, begin in earnest. Traditional African filial ties are on trial.

Kay constantly reminds Kundai that he is just a black man, anyway and that black men in the UK have no favorable recourse to the law. “Kundai, remember, you are just a black man in the UK.” On several occasions when they have a row, the British police are called to the house and they come with a clear assumption that; when a black man is in a quarrel with a woman, it must just be him who is on the wrong. They are ready to assume judge and jury. They often advise Kundai to either come to the station with them or go put up somewhere else for the night. The stereotypes run deep and Kundai is walking down a well laid script.

The climax of their fights with Kay comes when Kundai notices that Kay’s mother, vaFugude, has the temerity to use DHL to send love potions or concoctions to Kay from her sangomas, all the way from Zimbabwe! These mixtures are to be used on Kundai so that he becomes a compliant husband. An avid believer in seers, medicine men and dark mystical forces, vaFugude makes it her specialty to consult these darker, underworld forces on behalf of her daughter, Kay.

Everything becomes a power issue with Kay. From sex to normal conversation, she has to have the last word. Their divorce is tumultuous and tends to prove to Kundai that the British legal system is rather impatient with the protestations of men folk in these matters. Kundai has to go to court a record eleven times, to be allowed mere contact with his children. This involves meeting periodically with the children under observation, in a neutral empty hall. The children become tormented and disgusted. They have a distant look in their eyes.

In search of comfort, Kundai goes on to cohabit with a white workmate, Zettie, whom he calls ‘a stunning looker.’ Zettie is a young liberal-minded white girl from an affluent Buckinghamshire family. She appears to be the answer to Kundai’s questing spirit. She quickly learns to cook traditional Zimbabwean dishes and tries to speak Shona. She wants to be the ideal wife to an African man far away from Africa. But on their first visit to Zimbabwe, Zettie falls for and gets impregnated with Kundai’s cousin, Kian! They hit it off straightaway with Kian, as they both sit long drawn-out hours on the veranda at the Vumba homestead, downing lagers and continuously chain smoking weed, as if they have known each other for ages. Once more, things fall apart for Kundai.

Kundai quickly moves on. He does not want to be alone. He hooks up with a woman on an online dating website. She is a Zimbabwean called Jacinda. They quickly get married and Jacinda joins Kundai in the UK. In no time, she starts to treat Kundai to the bitterest and scariest lesson of his life. You read on with a numbed face!

Kundai loses it all and his subsequent charmed incantations and chants while in an English madhouse, are the most revealing part of this novel. As a result, Diaspora Dreams could be of interest to those who study the male psyche and manhood. The losing black male is still a dark area, rich with distances to be traveled and depths to be probed.

But this novel is not just about Kundai and his women. It also dwells on what often goes on when you set out to teach English to English pupils when you are actually a black teacher from a former colony! To date, I have not come across a novel that dwells at equal length on the relationship between a teacher from Africa and white school kids, and the relationship between a black teacher and the white school administration in a white country.

Andrew Chatora received an MA in Media, Culture and Communication from UCL. He has written and published widely on topical issues with This is Africa publication. He is principally interested in the global politics of inequality which he interrogates through his writings. When he is not writing, he is working on his PhD thesis on Digital Piracy, with Birmingham City University’s School of Media and English

Posted by kwaChirere at 5:09 AM No comments: