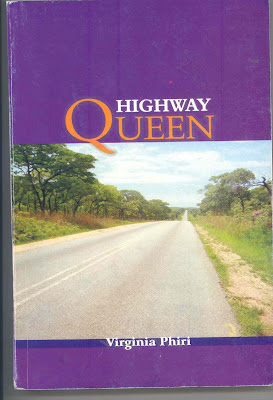 ‘Highway Queen’ is a collection of five short stories (in English) which are individual but related as in Miguel Street. It was published by Coral Sevices in Zimbabwe this 2010. Virginia Phiri chronicles the trials and tribulations of women cross boarder traders of Zimbabwe during what has become known generally as ‘the Zimbabwean crisis’. You find here desperate women at the boarder posts, scheming and scheming. Sometimes they are ensnared and raped for a free ride on the long distance trucks. But on a good day, they snatch little but sweet victories in order to feed their unsuspecting husbands and children. They bail out families from hunger and certain death. ‘Desperate,’ Virginia’s first book, in which a woman bites and chews a rival's ear in a love triangle, was published in 2002. Her second book ‘Destiny’, a story about a hermaphrodite girl, appeared in 2006. Virginia’s works include co-authoring Zimbabwe Women Writers anthologies in both fiction and non fiction and in various Orchid journals. She was writer-in residency at Le Chateau de Lavigny, Switzerland in Summer 2006 and Villa Waldberta in Germany in Summer 2008. She is also an Accountant by profession and is also an African Orchid expert. Orders: corals@telco.co.zw
Posted by kwaChirere at 8:42 AM