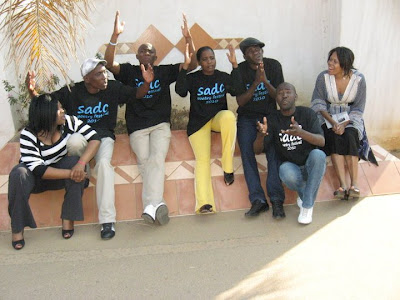 New and young poets from different African countries performing together an improvised piece at a recent SADC Poetry festival in Gaborone.

Call for Essays
CONTEMPORARY AFRICAN LITERATURE:
THEMATICS AND CRITICISM (2011)
To be Edited by
J. K. S. Makokha (Free University of Berlin, Germany)
&
Leonard Acquah (University of Cape Coast, Ghana)
We are seeking critical essays for a new edited volume on major works of African literature by new writers emerging after 2000 or by established writers but published after 2000AD. Contemporaries of Chimamanda Ngozi Adichie and Ngugi represent the two age groups of African writers. We are interested precisely in new critical essays focusing on themes and thematics in the new works of these two writers and/or their African contemporaries across the continent or living in Diaspora.
The first decade of the 21st Century has just ended affording critics with the window for retrospection needed in order to ensure objectivity in our critical enterprise as set out in the intention of this project. The aim of this celebratory collection of new essays is to offer emergent critical perspectives on the concerns highlighted in the exciting new literary output of African writers after the fin de siècle. The works under study should be in English or in other Afrophone or Europhone languages with English translations.
The contributions should be original and couched in relevant and current theories and frameworks of literary interpretation. Essays on new African literature that are related to the broad focus of the collection (i.e. theory of literature) and move beyond specific cases in an attempt to expand the discussion within a theoretical perspective are highly encouraged; the role of African literature or writers can be two good points of such a broad focus. Contributions are invited on essays that explore any of the following topics/themes/ideas in prose, poetry or play genres. Moreover, we explicitly invite contributions on topics or thematics not mentioned below but still fitting under this book project title above:

The book will be published in 2012. Kindly note the important dates below:


The formatting guidelines will be sent on March 1, 2011 to the authors of the selected abstracts.
Posted by kwaChirere at 11:40 PM