Shimmer Chinodya's boy is looking for his mother 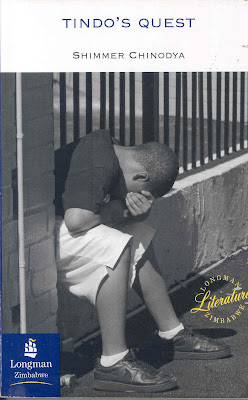 In this story, a twelve year old boy slowly realises that perhaps the woman whom he calls mother is not his real mother! Sadly, nobody in the family is prepared to tell him the truth. He pieces together scanty information and sets out on a solo and unauthorised search for his real mother. His resolve is unbreakable as it is nearly self destructive.

The search becomes a fight!

The search for one Maybe Mhlanga takes Tindo through light and darkness. He eventually learns that both his real mother and his foster mother are women who have little choices in this life. His father, Shingi has made many mistakes in his life, one of which being not being able to tell the truth to the right people at the right time.

But because all this happen during the period of Zimbabwe’s recent economic meltdown, Tindo’s quest takes him to the depths of a society torn apart and characterised by deep ironies. Once in a while one’s luck runs low and sometimes one is helped out, ironically by street people, shebeen queens and women of the night. In this story suffering unites people and, strangely, love separates people.

This is a book for ordinary readers and for those into family law, culture, anthropoly and history. It is not easy to search for a woman whose identity continues to shift as you come closer and closer to her. Sometimes you are taken to the wrong woman. Then you begin to meet people who tell you that your description fits a certain woman across the road but her name is not Maybe Mhlanga! You come across people who say they saw the woman you are talking about a few days ago, but when you meet her, you discover that this is not Maybe Mhlanga! So the search continues and people in the Bulawayo townships get to know you ‘as the boy who is searching for his mother’ and your story touches all the gamblers, pimps and the police and the whole community joins in the search with you.

Shimmer Chinodya has been one of the most outstanding writers from among those who became prominent after Zimbabwe’s independence in 1980. His writing tends to dwell on the young individual in the family in the fast changing times in Zimbabwe.

The literary community of Harare gathered at the Zimbabwe- Germany Society early this year to launch Shimmer Chinodya’s German translation of his 2007 Noma Award winning novel, Strife. The German version is called Zwietracht and was translated from English by Dr Manfred Loimeier under the Afrikawunderhorn series.

A veteran educationist, Shimmer Chinodya is close to children’s issues and is also an author of schools textbooks. His series called Step Ahead: New Secondary School English Course is read in nearly all-Zimbabwean schools. In 1995-1997 he was Visiting Professor in Creative Writing and African literature at St Lawrence University in the USA. He also holds an Honours Degree in English from the University of Zimbabwe and an MA in Creative Writing from Iowa. Tindo’s Quest will surely add a feather to Chinodya’s growing plumage.
Posted by kwaChirere at 12:58 AM