The real role of war veterans in Zimbabwe’s land occupations 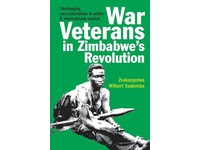 At the core of this well researched and footnoted narrative is the argument that the veterans of Zimbabwe’s 1970’s war of independence were and are still the major drivers of the land movement in Zimbabwe and that History cut them a role from which they could not renege.

And the conclusion is: All the major forces in the Zimbabwean milieu in the past decade; the nationalists, President Mugabe and his functionaries, the white farmers and drivers of opposition politics have to contend with the war veterans and the land hungry of Zimbabwe or risk being swept aside. Therefore, this is a book about the history of the role of liberation war combatants in Zimbabwe much as it is about their driving role in the land reform principally between 1997 and 2000.

The question that drives this very detailed book is: Were the land occupations in Zimbabwe driven and sustained by land hunger dating back from colonialism or by the spoiling operations linked to the political survival tactics of ZANU PF, state functionaries of President Robert Mugabe?

This question, as seen from the works of various writers on land in Zimbabwe; Sam Moyo, T.O. Ranger, A. Davidson, Raftopolous, Feltore, Moore and others, creates a decisive watershed.

Working with real dates and statistical evidence, Sadomba shows that the phenomena of land occupations in Zimbabwe is as old as colonialism, admitting that the land issue changed form and intensity during the colonial period but it remained the central focus for the nationalist movement and later fuelled the guerrilla war itself.

Contrary to notions that land occupations and land reform have always been blest by and directed by ZANU PF, Sadomba argues that the issue of land had been put aside at independence because in 1980, there developed a silent alliance between black nationalists, the rising bourgeoisie and white settler farmers. This resulted in a rift within the liberation movement itself and the sidelined war veterans catapulted radical land reclamation from below, targeting the elite, settler farmers and the state itself.

He goes on to show evidence that when the veterans encouraged early land occupations in places like Goromonzi and Svosve around 1997/98 the ZANU PF government was not amused. Minister Msika and vice President Muzenda, respectively to tell the land hungry to vacate the white farms that they had occupied. In the end government had to unleash the security forces. In 1996 the war veterans even forced the government to designate 1 471 farms for compulsory acquisition by November 1997. This was heavily resisted by the white farmers through the courts. In 1997 the war veterans openly confronted President Mugabe himself, loudly demanding welfare benefits and a return to the liberation agenda.

Sadomba further argues that ZANU and President Mugabe only sided with the veterans when the referendum to decide on a new constitution got a ‘No’ vote in year 2000.Just after this result, war veterans occupied a white owned farm in Masvingo. They claimed that the referendum, an event in which the country’s white population had participated more actively that any other election since independence, was in essence an organised ‘No’ vote against the land clause included in the draft constitution.

The clause stated that the land for resettlement would be taken compulsorily and only land improvements would be compensated. Compensation would have to be paid by the British government as the power behind the colonial machinery that had originally appropriated land from the Africans of Zimbabwe.

This book shows how the veterans engineered the movement which attracted peasants, urban workers, professionals, farm workers, political activists, security forces and others. They are moments when war veterans were loaned from where they were highly concentrated like Guruve and Mount Drawin to help in areas of less concentration like Nyabira, Mazowe and Matepatepa. There are sections on various methods of occupying a farm, sections on how how white farmers variably reacted to the occupation of ‘their’ farms, sections on the role of chiefs and spirit mediums, sections on how information was relayed and the resultant changes in the farming systems as a result of occupations.

Going through this work, you feel that indeed there are no permanent friends but permanent interests. This book is a must for all those who wish to get detailed insights into the complexity of relations between and among major players in the land reform of Zimbabwe.

Wilfred Sadomba himself is a veteran of the liberation struggle and this work is an indictment to all veterans of the liberation war of Zimbabwe and elsewhere in Africa that it is important to document their experiences not only on the war but also the aftermaths.
Posted by kwaChirere at 6:21 AM