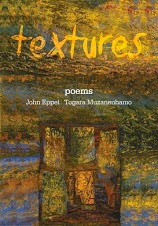 
Today, Thursday, 21 may 2015, we attend the Harare launch of Textures, a collection of poems by John Eppel and Togara Muzanenhamo. This will happen at the Book Café. The Bulawayo launch was sometime in March and I understand that the book was well received. In one online picture, the two poets are standing very close together. Togara’s face has a satisfied smile as he looks straight into the camera.  Eppel appears to be contemplating, almost saying under his breath, “We are finally there, young Togara. I told you.” That grey beard and specks give Eppel a grandfatherly look.


John Eppel is a big name in Zimbabwean writing. He is a serious satirist most of the times and you need to climb up to his high sense of humour to fully appreciate him. You cannot go through Eppel without a re-read. He is master of irony. I tend to pick him in the second or third reading and at every step,  I pick out something new. I do not allow him to frustrate me. There is always more onion under the onion. We haven’t met (having only read his works that are everywhere in Zimbabwe) and I do not yet know the texture of his voice or the feel of his hand.


If we meet today I want to ask him, “What are all those birds doing in your latest poems?”  In our country there are many birds that sing, good and bad. Some stand for death and some- good fortune. That brings me to Eppel’s poem, ‘Cape Turtle Dove’ which I enjoy immensely because I have also been very close to doves all my life. Of all the habits of the dove, the persona here is most touched by dove song which is haunting ‘like well-loved landscapes lately lit’. And the poem ends. The poem brings me back to the veldt with a deep sense of nostalgia. I am lost in my childhood when a dove was as commonplace as maize seed and the bushes themselves. The dove is the typical character in typical circumstances.


There is also ‘Grey Heron’ in which the bird is first described elaborately like you find characters being described at the point of entry in a detective novel. This particular heron is like ‘some poets’, lonely, calm but sometimes- suddenly swift and aggressive. Are these birds not like the people that we know? This time Eppel puts aside the political subject and goes bird watching! In order to come back rejuvenated? But are these birds not Eppel’s usual political animals now resurrected as birds? But Eppel is not aggressive now when working with birds. He is at his most soulful pitch. He is awestruck by the presence of various birds. He wishes he were a bird, too, far away from the madding crowd. Is age catching up with Eppel? Will I get used to the new Eppel? He is uncharacteristically calm and even prayerful… I am thinking.


Then I come to ‘Golden Orb Spider.’ This is my favourite poem in this whole book because we start with the spider and end up elsewhere! The spider at work becomes the genius; a Mozart, a Marechera, a Thomas Hardy etc. But the spider traps, mangles and kills its victims too, with the help of its web!


Today, if I have the chance, I will ask Eppel, “Sir, I think you come across as lonely!”  In ‘A Surburban Night in August’  there is something of T. S. Eliot’s J. Alfred Prufrock! I mean, the image of the wandering and sleep walking male loner, soaking it all in. Walking slowly in the dark, concerned with the losses of a distant past. I think ‘Looking for You’ is a quest for love lost. I also think the same about ‘Solvitur Ambulando’ where the loner is walking in the moonlight, choosing to solve the problem not by talking but by walking. Being a habitual walker myself, I know how walking heals a troubled mind and how one feels like forgiving the whole world after a long walk.


The sonnet sequence based on the area around the Bulawayo Dams is a must read. But once more, there are no people here, except for the aloes, the rocks and the insects. The persona takes in the world all by himself like John the Baptist- the hermit. It is when you are alone that you are able to place yourself within time. Here is John Eppel’s questing spirit.


I must also confess that I like some of Eppel's word combinations in Textures. Here are some: ‘The world is waiting, trembling like a mouse.’ Then there is: ‘There is something human about aloes.’ I also like: ‘Last night the blue moon brought you back to me.’ Sad. John Eppel is sad. But under that sadness there is the satisfaction that always come out of pining and suffering. Flogging the self in order to arrive at a certain purity and release.


Togara Muzanenhamo’s poems are dense. That is an honest warning! The constant allusions to characters in far away lands and in broad human history, is bound to challenge the uninitiated. He comes across as a very well read and travelled poet. He is always in control.

This poet is serious and unrelenting. And you feel that these poems were written and rewritten because they have deep links with humanity in various climes. You search for your own spot until you find it in his universe of feelings and thoughts. The other fortunate part is that  Muzanenhamo’s style is like the slow bold stroke of a brush. He cascades. He is long drawn. He goes for sounds that words make. He goes for the colour that certain word combinations make. Reading Muzanenhamo is like listening to a cat purring! Or, listening to a distant bulldozer ‘eating’ the terrain, constructing a dam or a leveling an ant heap.


In ‘Gondershe’ the story of the boy with a gun by the sea comes to one very gradually. The boy by the sea has to be seen and felt and he is here to feel and see the sea one last time. Will he shoot himself, you keep wondering. Will he go back home? Or, is the boy not your shadow? The sea is a powerful force in Muzanenhamo’s poems. The sea has a calming effect. The sea makes a useful backdrop to the poem ‘Desire’ where the persona ‘felt good being back on the water.’ It takes the sea for the man to see his woman for what she really is- an invitation to carnal and spiritual satiety. The turmoil is hidden underneath the style.


This takes me to the prose poem ‘Peruvian Sunsets’ where a woman is at one special moment of making love to both a shell shocked man and the old city, right there in a public park at sunset. We glimpse them just a few moments before they are consumed in their gradual but hungry passions. The power of flesh is deeply felt here.


I also enjoyed (but was also dazzled) by what happens to one Uzziah Chikambi in the other prose poem. A man with a ready gun walks towards both a ghost and his very own past. The edges of reality are so blunt that you realize that we often dream regardless of our wakefulness. I also felt the same with ‘Engine Philosophers’ because sometimes we are consumed in work and think about work and its history and the endless yet to be touched futures of those who work tools and engines with their hands and souls.


My favourite poem by Muzanenhamo is ‘Zvita’ because it terrifies me beyond explanation. I also am in the habit of constantly thinking about what happens to the body when it dies or after it is buried or when it is abandoned out there, unburied. Forbidden territory! How does it help you to think about a body’s condition after burial? That is why human bodies have to be buried...But you find yourself going in that direction. Maybe because the body is the only real terrain we have between ourselves and the world itself. ‘Zvita’is not a poem for the faint hearted. The body is a very fragile and temporary thing.


Textures is a collection with poems that speak about what we see and feel as we glimpse a world that is passing by. You come away with the feeling that the experience of the senses cannot be substituted with any other thing. This is a book about precious feelings.
++Memory Chirere, Harare
Posted by kwaChirere at 3:26 AM