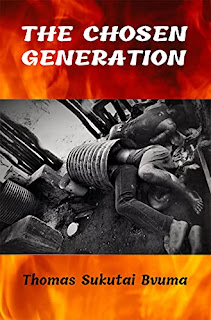 “The Chosen Generation” a historical novel by Thomas Sukutai Bvuma

Young Masara Musamba of Sakubva, Umtali, Rhodesia, is involved in the war of liberation that gave birth to Zimbabwe as a ZANLA fighter. This is his story told under his war name; Nyika Yababa, or simply Yababa.

He quickly joins the war after beating up his white boss who had beaten him for a flimsy reason at a fruit canning factory where the boy is working temporarily while waiting to go and enroll at the prestigious University of Rhodesia.

It is a serious crime in Rhodesia for a black man to beat up a white man, for whatever reason. You would rather run before the police catches you. So Masara abandons his job, his pay and his very beautiful girl friend, Wadiwa and rashly clambers up the mountains on the western side of Umtali, crossing the border to join the guerrillas across in Mozambique by first getting to Chibawawa refugee camp in September 1976.

Masara had met some ZANLA guerilla before in his own Mutambara communal lands and had always had a romantic view of the war of liberation and the guerrillas. He had always hoped to join the liberators one day. This historical novel is renowned Zimbabwen poet, Thomas Bvuma’s first long prose offering.

But who is Thomas Sukutai Bvuma in Zimbabwean Literature? Initially, using the pen-name Carlos Chombo, Thomas Bvuma wrote the well known poem, “Real Poetry” at the height of the war in the late 1970’s.

“Real Poetry” eventually got more “visible” publication in the Zimunya-Kadhani edited post war collection called And NOW the Poets Speak (1981). Musaemura Zimunya and Mudereri Kadhani set out to bring together poems which reflected on the Zimbabwe revolution then.

Zimunya and Kadhani could not “resist using (the poem) as a choric prelude to this selection.” They wrote somewhere that they also “found (in this poem) the power of the intellect, control of rhythm and style well combined and married to idea, action and reaction” and that through it, one recalls the more prominent Angolan war poet, Agostinho Neto himself.” Zimunya nad Kadhani also used a section of the poem on the blurb of the cream coloured And Now The poets as the theme poem and the poem  went viral.

Thomas Bvuma, like Alexander Kanengoni and Freedom Nyamubaya, wrote poems at the war front in between battles either as a pastime or a means to reflect on the war he was participating in. He is still writing and publishing poetry long after the war of liberation and some of his key pieces constantly jog one’s mind. More of Thomas Bvuma’s poems were later published in Every Stone That Turns (1999) almost two decades later! They are arranged in a way that sets out to capture the changing times from war to independence.

But his latest work, the historical novel called The Chosen Generation, appears to give the more elaborate materials that inform the turmoil and thought that one finds in the poem “Real Poem” and the collection of poems called “Every Stone that Turns.”

This novel fits in and tucks in real critical geographical and historical factors that have been glossed over by many writers of Zimbabwean war fiction and even those in war history..

Through this novel, places critical for training and refugees like Chimoio, including its attack by Rhodesians on 23 November 1977, Chibawawa, Tembwe and others are brought to life from the point of view of a recruit and soon to be a trained cadre. There are no sacred cows in this narrative.

As you read this novel, you are forced to compare and contrast it with such iconic works such as Chinodya’s Harvest of Thorns, Kanengoni’s Echoing Silences, Mazorodze’s Silent Journeys From the East, Mutambara’s The Rebel in Me and Miles Tendi’s The Army and Politics in Zimbabwe: Mujuru, the Liberation Fighter and Kingmaker.

The story is written from a rather laid back point of view of an ex combatant now sitting in his house in poverty stricken post war Chitungwiza township of the economically tumultuous 2008. He is for searching his place in all the tricky things that have happened and sometimes he thinks that his generation is not chosen but cursed. But he insists that he wants to judge them fairly.

The narratives moves gradually, with ease, finding facts and fallacies, even fitting the 1970’s within the context of the world’s rebellious youths of the hippies, rock music and many other things. The story takes you to places and decisions made outside Rhodesia and the war front. The war in Rhodesia is part of world events and that is the strongest theory propounded by this book.

In chapters 10 to 13, which are very critical, the writer recreates Chimoi as it was in the context of the war against Ian Smith. He goes for geographic space within historic and social context. You begin to read into the détente period, Zanla conscription methods as from 1976, the rise and fall of the Vashandi ideology, love affairs, betrayals, Zipa, Zanla-Zipra relations, the battle of Mavhonde, Tongogara, Herbert Chitepo, Robert Mugabe, Rex Nhongo and the attacks and counter attacks between and amongst people and systems.

This book is a must read for all people with a genuine interest in the emerging perspectives on Zimbabwe’s difficult war of Independence and how much it is a prelude to what took place within zimbabwe soon after.

Posted by kwaChirere at 7:53 AM