Stanley Nyamfukudza and the Zimbabwe of the early 1980's 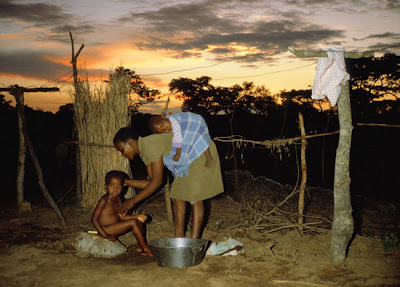 (Memory Chirere's reflections)
For Zimbabwe, turning thirty brings unbearable memories of 1980. But, maybe, for us interested in Literature the joy is also in picking, sometimes at random, on any book or story based on the feelings, thoughts, promises and revelations of around the independence period 1980.

One settles on Stanley Nyamfukudza’s 1983 collection of short-stories called Aftermaths especially those that go beyond celebrating 18 April 1980. These stories by Nyamfukudza dwell on “finer” reactions to independence. They explore various emotions, expectations and some anxieties of a freshly independent people.

In that context, you cannot also avoid the fact that during the struggle for the liberation of Zimbabwe Stanley Nyamfukudza went to exile in Britain. He was part of the 1973 University of Rhodesia black students who were imprisoned for protesting against racist policies on the campus and the whole country. Some of Nyamfukudza’s contemporaries in this act have become prominent names today in different fields. Among them the late politician Witness Mangwende and fellow writer, Dambudzo Marechera.

This generation went to exile or crossed boarders into Mozambique, Zambia and Botswana to bolster the nationalist war of liberation. Aftermaths is exciting because some of the stories here are decidedly based on the ‘the return’ home of the exiles and fighters around 1980.

In the title story “Aftermaths” a “returnee” goes down his boy-hood street in the location trying to reconnect. He tacitly takes a mental register and inventory of the township houses and folk. The signature of time is plastered on the walls of the township and although there is an air of carefree, a sense of tension is discernible.

The “return of the native” is generally a fascinating theme in Literature.

Many stories in Zimbabwe are told of the ex-combatants who threw large parties on their return. Their people wanted them to sing the war songs, to crawl on the ground as they did in the war and to sneak through the bushes and disappear as they were reputed to have done during the war. Many who returned from exile boasted about their impeccable English, German, Swiss or Swahili.

Time and experience had created a certain unbelievable social gap between those who had remained at home and those who had “gone away.” Nyamfukudza’s persona feels “robbed, childishly but painfully.” One takes note of a hazy suggestion that this is a community that has gone through a shock and soon there would be time to stand up and be normal again.

Maybe Nyamfukudza’s most dense and poetic story of the new 1980’s era is “Settlers.” It is apparently based on the earliest Zimbabwe’s resettlement programme. A young man and his pregnant wife find themselves clearing up dense bush to set up home and field.

Looking at his own circumstances, the man is overwhelmed. The Zimbabwe revolution had delivered a first, offering virgin land to the formerly dispossessed peasants:


“Sometimes, in the morning, standing there with
his pick, shovel and axe on his shoulders, it
seemed pointless, mad even. How could one
man and woman fight against all this thick
forest, sustained only by the dream that if
they kept at it, they would in the end claim
some room…”

One cannot escape from the “garden of Eden” feeling evoked by this story. By extension, husband and wife are Adam and Eve, respectively. The whole metaphor extends to the new nation state of Zimbabwe. Reading on, one recalls the heavy rains of the first Independence summer season and the subsequent bumper harvest. The phrase “Zimbabwe the bread basket of Africa” stuck as people flocked from “tired” territories in Masvingo, Madziva, Chiweshe, Gwaai… to open up heavy virgin tracts of fields in Muzarabani, Sanyati, Gokwe... Indeed “swords turned into plough-shares.” All of a sudden one wanted to be useful, to dig a hole in the earth and rest like some kind of a veldt bird.

Sleeping, working or walking, husband and wife “felt they were intruders, fenced in by a forest which just stood there, as if watching and waiting…” Implicit in the references to the flora and fauna is the plunder of nearly a century that had made a people stranger to their own space. Colonialism raptures spiritual connection between men and his heritage.

But the fecundity overflows into the human world in this subtle short story. The man likes to sit by the fire-side “watching her (wife’s) by now faintly swollen belly as she moved about in the small, smoke filled kitchen, preparing the evening meal.” The young wife’s pregnancy creates a sense of continuity and celebration which typifies 1980.

The forest in “Settlers” is however not that new or impenetrable. Physically and spiritually this is a place that leaves one with a feeling that one has been here before. Only one does not know exactly when and why.

Nyamufukudza also dwells on the other part of the miracle of 1980: the massive journey back to school. After the war old schools reopened and new uncountable ones sprouted. They were called ‘Upper-tops’ but even the derision in that title was thankfully ignored. Old tobacco barns became schools. Old churches became Adult literacy spots. Under the big Baobab tree a black board was erected, a teacher was found and a school was founded! Someone thought the old Rhodesian camp could be put to some good use and a school was founded. Men with beards and women with protruding breasts put aside the war memories and went back to school! Minister Dzingai Mutumbuka traveled the length and width of the country preaching, coercing and opening schools.

In the story “A fresh start” there is captured a small school in the middle of a rural community that is emerging out of war. Everything about the school is small, makeshift and experimental. One classroom block, three teachers who stay in thatched houses and pupils who wore neither shoes nor uniforms. Everything has the magical touch of “a fresh start.” The major character in the story is a teacher from the urban areas who happen to have a soft spot for the rural and the natural. For him “the lack of amenities, basic books even, seemed hardly important.”

The scene, typical of the rural Zimbabwe 1980, is set for adventure. After the war, communities tended to be inward looking. The basics first, seemed to be the dictum. A people had to have at least several shops, a bar and a grinding mill at the “growth point.” Then people needed a deep tank and a small school for a start. The teacher in “A fresh start” is part of the spirit of educating the nation. His pupils are his family. They keep a distance of respectability as he shares with them his knowledge and sometimes his own food. They respect and revere him and he knows it. The parents fraternize with him, always using the word “teacher” before his name.

But part of the fresh start here is that the teacher stumbles into a very beautiful woman who has sadly been maimed mentally in contact in the previous war. As he takes in the wonder and the beauty of the river, one day, she strays onto his hideout and he cannot believe there could be such a beauty out here.

The teacher goes through a restless panic. The ugly side of the just ended war is typified by this very beautiful young woman who will never have her mind again nor speak. The message that the war was a give and take and not romance gradually descends on the teacher. In that reawakening, he is first “sad and thoughtful” and later settles on the seemingly personal but national project. “The children looked up at him expectantly. He cleared his throat… were these the only available redeemers, if he was to recover from the rigours of apathy and jaded hedonism?”

Nyamfukudza captures the feelings of the times with a touch that is very personal and eternal. He has a certain sympathy for people that does not allow him to easily paint them right or wrong. Nyamfukudza leaves you feeling that individuals in their private endeavors represent the scattered conflicting sensibilities that make a nation.

Aftermaths is a natural sequel to Nyamfukudza’s war-time novel, The Non-Believer’s Journey
Posted by kwaChirere at 8:17 AM