My friend, the festival in Gaborone had its people and moments

(Above)Zimbabwean poet, Nqobile Malinga and Lesego Madingwane of Botswana started by rehearsing a long and sad poem (in Ndebele and Tswana!)and as they went on and on, they actually broke down and cried real tears! For me, this was the climax to this festival. And below, I too had moments to be merry and crack jokes. What else can you do when you are amongst very inspiring people? Jairos Kangira and Tinashe Muchuri are born actors.

I honestly think that the most outstanding poet from this festival was Botswana's Kaone Koka (below) You see, in Botswana they have some kind of communal poetry which is just amazing. They gather together in a semi circle and sing, breaking in between to allow Kaone to do some of the most heartrending recitations that I've ever come across. He chants, he croons and cries, twisting and turning like a man who must die now-now! Ah, Kaone Koka! And you Batswana, look after this genius. Its a command! 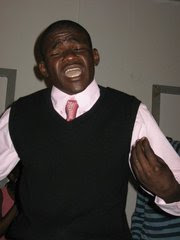 At the end of each poem they actually have to mob Kaone and calm him down back to reality.
(Below)Award winning poet, Tania Tome of Mozambique is just something else. Her poetry is like a roll of drums! Then suddenly she becomes musical. She makes you feel/think that the soul is a fruit. Tania is a volcano. I could not have enough of her and I do not want to forget her.

*** pictures by Zanele Muholi and Joseph Molapong
Posted by kwaChirere at 8:34 AM