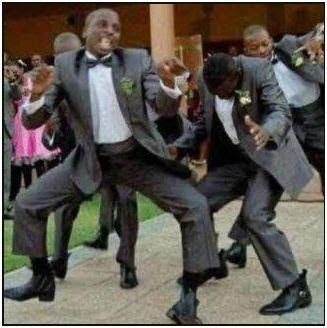 an analysis By Jairos Gonye
Chibhasikoro  and borrowdale dance routines have been the most fascinating dance features in  Zimbabwe since Independence  in 1980. Chibhasikoro is a dance apparently popular with farm and growth point settings and involves peculiar moves resembling a bicycle rider’s pedalling strokes. Borrowdale is originally a ghetto dance whose popular moves seem to imitate those of a horse rider and the horse as seen competing at the well known and affluent Borrowdale Race-course in Harare.
The chibhasikoro and borrowdale  moves, respectively, are interpreted  as reminiscent of the ‘cargo cult’ whereby African  dancers, in their want, theatrically  denote their wish to ride bicycles and horses while connoting underlying desires to have improved social and economic status. Both dances seem to be enacted all over Zimbabwe and unlike the traditional socio-cultural-specific dances (mbakumba, jerusarema or muchongoyo), Chibhasikoro and borrowdale are  more national rather than ethnic. Both dances are viewed as social, psychological and entertainment tools of communication.


Background:
In colonial Rhodesia farm settlements where the largely dispossessed Africans sojourned, the farm shop and beer hall turned into cultural exchange and entertainment centres after a long day of farming. In particular, community-produced dancers and musicians would perform for social entertainment on the farms during weeknights and for commercial purposes in towns during weekends. Among the popular names were; Somanje, Chimbetu and Tazvida,  from Marondera, Chegutu  and  Masvingo farms, respectively. Their 1980’s  musical compositions were a mixture of;  jiti,  sungura and chachacha and they experienced a simultaneous rise with the chibhasikoro dance.


Chibhasikoro dance:
Considerable  energy is expended with dancers using all their body zones. Dancers exhibit exceptional footwork, dexterously stepping their feet forwards and backwards at a rapid alternate pace like cyclists, while they simultaneously mimick the action of  throwing morsels (of sadza?)in their mouths.
The dancers have their upper waists loosely and obliquely pivoted to allow free shaking of the hips and buttocks. Intricate moves; performed with legs bent in a crouching fashion, reveal the dancers’ athletic agility. Their upper bodies produce several gestures and moves that are in sync with the movements of the lower half. Hands stretch out to imaginary bicycle handle bars. Bars; which freely dissolve into automobile gears.


The dancers gesture with their hands, chins, hips and foreheads; as if in response to statements that the nimble feet utter.  They, bend slightly forward, scan the audience, and then make four or so simultaneous sweeping moves with both left forearms and lower left legs, before switching to the other half. To sign off his performance, a male dancer falls over on his back, supported by a fully rotating bicycle wheel on his forehead while his feet, pelvis and belly, all together performing some fancy tricks. The female dance partner (in turn,)takes the rotating wheel, balance it on her hip, and then simulates a sexual act, gyrating her waist, before dashing into her partner’s embrace.


Unbundling Chibhasikoro:
Despite their visibly affluent status in a country where the majority was poor, most white farmers had gained notoriety for rewarding even their most loyal retirees nothing above the bicycle for pension. A non-dancer said to me, “The  chibhasikoro moves echo the intentions of the traditional ritual dance, the itch to ask for rain, harvests, growth and protection of family.”


The interviewee added, “In dancing chibhasikoro,  eyes fixed on a distant outer future, dancers are communing with their ancestors and God to grant their present requests such as bicycles and food.” Such utterances confirm people’s conferment of meaning to dance, and a general appreciation of its communication and ritual value.


A male interviewee substantiated my views about the growth and transformation of chibhasikoro by asserting that initially, chibhasikoro was a masculine beer hall dance. Currently, it being gradually accepted socially, with women partaking in it. A female dancer explained the origins and character of chibhasikoro thus: “Expert dancers actually own one or two bicycle wheels; either one rim with, or one rim without spokes and a gear that they use at certain stages of the bicycle dance. The use of the wheel is reminiscent of the use of the small axe, ‘gano’ by traditional dancers. Even for those without the kit, their basic move is the miming of the cyclist.


Chibhasikoro entered the city with rural to urban migrants, getting renewed a little by adding the dance swings that appear like the dancer is changing the gears of a car, turning and accelerating. This indicates the increasing and shifting needs of the poor.”


Evidence suggests that chibhasikoro originated in the commercial farmlands of Zimbabwe, but migrated to urban centers together with the drifting dancers, musicians and general workers seeking better fortunes there. The rate of broadcast of chibhasikoro across Zimbabwe increased with the forced migrations following the 2000 onwards land redistributions.


Borrowdale dance:
The dancer’s basic moves depend more on nimbleness of  legs than the pelvis. His moves consist of galloping steps, unlike the shuffling pedals of chibhasikoro. (Imagine a horse galloping at one place!) In vertical posture, the dancer’s body is supported on a leg at a given time. The other leg is bent at knee- level and only beginning to touch the ground. From the waist upwards, his torsos is slightly tipped forward. The dancer hangs his arms in space, bent at the elbows at 130 degrees or so. Both hands are bent at right angles, at which they swam back and forth to symbolize the thrust of the horse’s gallop and the reins of the jockey.


The dance reaches a full gallop as the dancer pull out to the front and draw his second and last fingers out like ears of race horses, while the imaginary competitors chase on. The rider moves on coordinated feet, a hand intermittently urging the ‘horse’ on, facial gestures and head movements corroborating the energy sapping nature of the dance.


Unbundling Borrowdale:
A noticeable trend after independence in 1980 was that some affluent blacks and African political heavyweights migrated to respectable and exclusive suburbs such as Borrowdale. The Borrowdale racecourse of Harare is the home of the best bet. But the majority of blacks remained in the ghettoes and could only dream of owning a house of their own.


With its origins in capitalist commerce, borrowdale dance was essentially performed to entertain the betting spectators at the racecourse. Yet, we see the poor urbanites harness the dance to communicate their pent up social grievances and wants, disguised in the wish to win the anual OK Grand Challenge prize.


A male dancer observed that, “Borrowdale is a poor ghetto man’s dance with a rich man’s name. It’s not by coincidence that dancers imitate horses competing at Borrowdale Racecourse. They also dream of one day owning a house in Borrowdale. It shows how people cling on to false hope in order to cope with poverty and want.”


The idea of imitation mentioned here is an expression of what is expected. If the early hunters’ hunting catch dance prefigured the desired catch, by analogy, punters bet because they expect to win and dancers dance borrowdale because they also want the  good life associated with Borrowdale suburb. This is reminiscent of the spirit shown in cargo cultism, particularly inspired by the difficult lifestyles the have-nots lead, while constantly being bombarded with possibility images.


Chibhasikoro or borowdale?
As the dance entrenched itself within urban society, borrowdale seemed a complete overhaul of the Zimbabwean dancing stage, particularly an overwriting of chibhasikoro dance. If chibhasikoro appeared rather mechanistic and more staccato in speed of steps, turns and rhythm of movement, borrowdale is more refined, clearly smoother phrased and sometimes capable of moments of floating stretches.


If chibhasikoro was more collective, calling for dancers to swing in proximity, borrowdale tends towards exhibitionism; beginning with many dancers, but ending with the overall best. An onlooker commented thus: “Borrowdale is the dance which members of different societies can groove down to with ease. Being  able to move your body to its intricate styles is actually an achievement. Politician, civil servant, white, all compete and chill with the poor worker, informal trader, vendor and tout in borrowdale .” The speaker suggests that there is a style ‘borrowdancers’ aspire to master, perfect and perform.


Once I achieved a keener appreciation of borrowdale from watching Alick Macheso go through it. Macheso looked such an innovative hybrid master mixer. In partnership with the flexible Franko Dhaka (Slomo), the duo performed some delightful kangaroo-like spring dances, twisting their thighs like razor wire. Then, having exhausted all the other competitors out of the borrowdale gallop, the pair apparently wrestled technique from technology. And, inscribing photo-finish technology unto themselves, they performed the dance in slow motion - conscious that they were creating an unprecedented choreography in Zimbabwe dance. On reflection, I saw that this was an instance of innovative improvisation of skills that guarantee beauty and perfection in whatever art form.


As if to say, our dance is as fast as the racing horse, therefore to appreciate it, you need to ‘slow motion’ the dance, Macheso and Slomo effectively obliterated the boundary between performed dance and technology. They sent cameramen rushing to shoot the ‘illusion’ of the ‘horses’ in slow motion. Though borrowdale dance is synonymous with Macheso, in Zimbabwe, it is generally agreed nobody owns a dance just as nobody owns the daily multiplying language.


Conclusion: The two dances have become as culturally meaningful as mbakumba, jerusarema or muchongoyo. The difference is that the two contemporary dances have no ethnic borders inscribing them unlike the three indigenous dances named above.


On the surface, chibhasikoro or borrowdale may denote joy, contentment and play acting, but underneath, they connote complex messages such as comments on farm labourers’ grievances with their lifestyles, urban struggles and the desire to lead less stultifying,  but fulfilling lives.