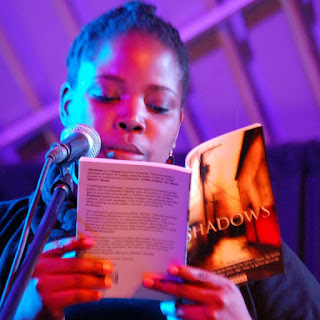 (picture: Novuyo reads from her 'Shadows' at book launch)

As this novella begins, Mpho (the narrator) is already steeped in being who he is; a man on a sharp decline. He can never go up. His very first wish, which is the first sentence in this book, is: ‘I want to be alone.’ But he cannot be alone in a populous and seething Bulawayo township.
Mpho does not and may not know who his father is. Mpho does not love his mother; an ageing-nearly-out-of-business and sickly prostitute. Sometimes he watches through the key hole as she is being laid. He has already taken his mother’s prostitute friend, Holly to bed (during a freak sexual storm). Holly cannot wait to have some more from Mpho. This symbolically incestuous act stays with Mpho up to the end. He is going out with Holly’s daughter, Nomsa whom he beds at will. He desires her the way one desires to perform an irresistible ablution. Mpho drops out from a lucrative Chemical Engineering degree at NUST after a student’s riot.

Mpho smokes mbanje and only when he is like that, does he see more clearly the political and spiritual degradation of his country. He writes very desperate poetry and uses his brush to paint pictures of death and doom. Mpho has no political ideals besides wishing to be happy. He attends both ruling party and oppositional party rallies interchangeably (for the abundant food and t-shirts). That makes his subsequent arrest and harassment misplaced and unjustifiable. The only release available to him towards the end is the hope to meet his dead mother ‘in dark places.’

At some point, he leaves behind his mother’s corpse decomposing in the morgue and skips the boarder into South Africa. Unlike the other Zimbabweans who take this archetypal route, Mpho is not in search of a job. He is only after Nomsa, the love of his life. He cannot work. Mention of a job riles and makes him bitter. He eventually learns, like the other stock characters, in Christopher Mlalazi’s Many Rivers and Brian Chikwava’s Harare North, that whilst Zimbabwe is in inimitable turmoil, there is necessarily no sweetness abroad for the unwanted Zimbabweans. Mpho eventually returns home to be hounded relentlessly by both the incognito spirit of his mother and the police.
Here is a tale about a dog that chases its unwanted tail, but never hoping to catch it. I have come across similar characters-in-constant-decline in Orlando Patterson's The Children of Sysiphus and Marechera's The House of Hunger. Rasta, the mbanje intoxicated artist at the Bulawayo gallery summarises it all: ‘I am coming my man…Forever coming. I never reach the place where I am going. And this is the whole point. To be forever coming.’

This does not mean that this is a depressing book. Far from it! This story is consistently underlain by a satiric comic strain. We are invited to laugh when we should be crying.

The descriptions of especially female characters could be the most convincing attributes of Novuyo Tshuma. This book is a startling gallery of women’s images: ‘Holly is a piece of work. Her face is yellow; not a natural from having caramel skin, but a jaundiced yellow from all the lightening creams she uses. The rest of her body is dark. It is a frightening contrast; an oval yellow face and then brown from the neck going down. Brown ears. Brown spots on her yellow forehead. Her weave is a huge blonde coronation that dominates her head. She lights a cigarette.’
And: ‘Mama at dindindi. She is caught by the camera in the middle of a dance. She is halfway to the ground, as though she is squatting. Her bum sticks out behind her. She is gazing over her shoulder at it, as though to make sure it sticks out in the right way. In her hand is a bottle of Black Label. She has a perm on her head, and huge earrings that dangle all the way to her shoulders. Her lips are pulled into a pout, something that can be considered sultry and seductive…There she is getting down. The people have stopped to watch her. They are cheering. She pouts and breaks into the sweetest laughter you ever heard. And there she is, caught in timelessness in a beautiful photograph.’

And: ‘A fat woman beckons me. She is standing by the side of the pavement, leaning against Fazak Store. There is a careless wealth in the way in which her doek slops over her shaved head. A wealth that allows her to tear at a piece of Chicken inn thigh, shovel the meat in with a chubby finger and chew with her mouth wide open for us all to see exactly how well this meat slides down her throat… She swings her bulky frame this-a-way-and-that-a-way as she hisses at us the passers-by. Her voice throws a rhythm into the air that matches her pendulum movements. Her pockets bulge with the much coveted forex.’

Tshuma’s debut is a second novel by a Zimbabwean going by the title 'Shadows.' Chenjerai Hove has a novel, Shadows, published in 1991. Novuyo Rosa Tshuma is an award-winning short fiction writer from Zimbabwe. She was the winner of the Intwasa Short Story Competition 2009. Currently, she is pursuing her studies at the University of Witwatersrand, South Africa.

Posted by kwaChirere at 5:20 AM