The 'smallest' and ‘forgotten' book of Solomon Mutswairo 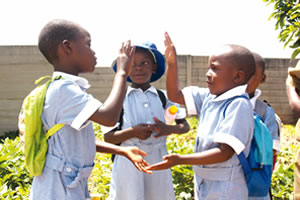 The late prominent and first black generation author of Zimbabwe, Solomon Mutswairo’s opus is punctuated with some record making national and literary projects. There is Feso (1957) the first novel in the Shona language and the lyrics to ‘Simudzai Mureza weZimbabwe’, the anthem of the Republic of Zimbabwe, some novels and scholarly works. However, there is almost always the unconscious and unfortunate sidelining, of his ‘smallest’ book of 1982 called ‘Tagutapadare: Poems for children.’ Recently, I came across the green booklet in an old cupbpoard and returned to childhood.


The blurb to the 2000 Zimbabwe Publishing House version of the book describes the contents as ‘gamesongs.’ You notice that the African children’s song, if closely considered, is no little song. As the child sings these songs and play the subsequent games at various points in its life, it engages with its world in various fundamental ways.  The child learns to recognize itself as a stakeholder in the natural and social environment through naming and even interrogating its world.


Although in Tagutapadare, Mutswairo is largely a collector and recorder of Shona childhood song games, a project similar to A.C. Hodza’s Mitambo Yavasikana navakomana Pasichigare (1984), Mutswairo is solely responsible for the ways in which he has recalled and arranged these pieces. Despite this form of mediation, the songs remain identifiable with their origins.


Once in a while we all remember the little songs that we sang as boys and girls in the village or the street where we grew but rarely do we remember to connect these songs and games with what we are today – worldviews, fortunes or otherwise. When you walk or work or take a morning shower, the songs erupt from the subconscious.  Waiting for the bus or performing an odd chore you catch yourself sing:


Solomon Mutswairo's English version that accompanies the Shona, lacks the rhyme and rhythm of the original but it nevertheless captures the raw concepts:


and putting it all together


That poem is a story about Mtengeni, a local drum player whose beats on the drum counts up to ten as he adjusts to the notes of a more serious drumming before the singers join in.


With that song you learnt to count and identify objects even well before you went to primary school. The rhythm and the subsequent playful touch to the lyrics aided you on. You thought it was a game and that is where the catch was. The vitality of oral art is with its involvement with life that at some point, art is the vehicle towards life.


Counting is important and central to survival in all human societies. And in learning to count, aided by that song, you wanted to make sure, for instance, all the cattle were in the kraal before you retired for the day. You wanted to identify the specific row in the fields in which there was the one and only cucumber or water-melon plant. In oral society, rhythm is in fact part of administration.


If it was not ‘Kaposi kapiri,’ then it was ‘Motsiro Dendere’ which is even more musical and entertaining.  One could sing it as a game-song or as a working song:


In that song the child empathises with the peace in the dove’s heart as it sits in its nest up a secure tree, cooing in the noon day sun, far away from harm. When you sing ‘Motsiro Dendere’, you become the beloved bird up in the nest. This allows the child to let go beyond its physical and emotional space and allowing release from the limitations of individuality.


Some gamesongs captured by Mutswairo demonstrate the limitlessness of man’s quest to be more than just himself. For instance, ‘Kazuva wee duu’ (hey Mr. Sun) is sung to the sun by children as they bath or swim in a river or pool, imploring it to come out of its cover so that they could be warm. On a wintry day, the children’s chant will actually result in the sun momentarily appearing from behind the woolly clouds, glowing and suddenly warming up the environment.


But, of course the sun goes behind the clouds after a while and it is a common feature of Zimbabwe’s winter afternoons. On a summer day, the child sings ‘Mvura naya-naya tidye mupunga’ (Rain come so that we could have grain to eat), imploring the Skies to give Earth some water. There is a realisation by the children of the magical power of words, the will power that is infinite in prompting a specific reality at a given time. This teaches children that man and the elements are in harmony and that the world is as it is today and every time, partly because of man’s volition.


And when the new moon appears up in the sky, a bright little crescent, you and colleagues look up and greet it with song:

There is a new moon today


New up in the sky


With colours of a bull frog…’

Usually it is the children who see the new moon first in the African set up because they tend to run around the compound, bantering amongst themselves just before it becomes very dark.  When they sing greetings to the new moon, the elders stop whatever they are doing and rush out of the house to gaze at the new moon too.  This is because the moon is central in telling the time and for tying people to specific moments of the seasons.  As the children sing, the elders take note of how close or further away the rains, the cold and the harvests are. This mobilises the whole community and offers people opportunity to reflect on their relations with the elements and other men.  Some people look up into the sky and honestly tell the new moon their individual wishes or regrets:

‘I won’t anymore, my mother


burn the child with bean pudding


spit! Spit!   There you are moon with your sickness.’

But if the moon is struggling behind the clouds and therefore not brilliant, it is time to sing and play about dangers that always lark in the world.  You sing about beasts out in the forests in ‘Chinjiri Chiri Mugomo’:

‘ My children have all perished


Chorus:  By the monster in the hill


Etc: My children have all perished by the monster in the will’

There is no time to think that life is a safe venture.  You begin to realize from an early age, through song and dance that there are monsters, hurdles and problems in the real world.  You learn about the fragility of the human body and begin to prepare for life’s periodic sorrow and grief.


However, the liberation comes from the realization that your community will always stand by you.  As you sing  ‘Chinjiri Chiri Mugomo’, you hold on to one another in a single file and the leader tries to shield and protect ‘the children’, especially the last in line, from being caught by the child who represents the monster.


Then there are songs to register the excitement of the sense of sight.  There is no celebration in silence.  When crossing a stream or fetching water from a river, if a girl gets to see her beautiful face, she sings and dances:


(Oh dear mother, how beautiful I look) This is my own recollection.’

Or, if it is August, and the wind is blowing, swaying the trees, one could burst out:


(The trees are gently swaying in the wind)

There is also time to move the arms, the knees and the waist as you sing.  Standing out in the school grounds during break-time, girls stand in pairs and trios and celebrate the music in their own bodies.  They raise that their hands and clap in unison with their neighbours and the leader leads the way, naming the next activity:

And as you watch from the classroom, (doing your corrections), you can single out the stiff jointed girls from the rhythmic ones.   You can hear the clapping and see the celebration of girlhood.  You can see a small community of budding women learning what friendship and camaraderie mean.


And when you are home, carrying your mother’s crying baby on your back, you sing it to sleep gradually, with a song about doves and nestlings.

(the dove does everything; roasting millet, looking after the young one and in my clumsiness, I dropped grain and got worried over it).


As you sing the baby (your own sibling) to sleep, you also sing to yourself.  The emotion of the song also silences the naughty child in you as well.


These songs teach the child, first, to move in tandem with its community and its norms. The songs also go beyond the plight of the individual child, sending one searching (unconsciously) for the centre that holds together; people, animals, seasons, the elements and the universe. Therefore the children’s story in our society is in song and not always narrated in the many children’s stories. And the story of society is in children’s songs. The child is not silent. And more important, the child inherits this song from the previous generation and breathes in it a new content and fresh perspectives.

Mutswairo’s activity of remembering these songs in the written form is important because this is one way of keeping alive the memory of society.
-By Memory Chirere
Posted by kwaChirere at 2:40 AM