The story of Chiyadzwa diamonds in fiction 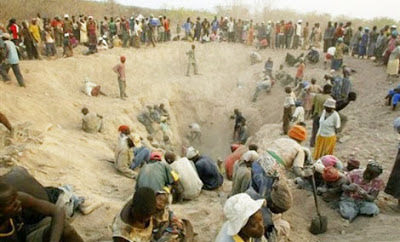 This is the first long fictional work on the goings on during the initial diamond rush in Chiadzwa - Marange diamond fields, a period before government intervention. It is also important to note that the author himself comes from South East Zimbabwe.
Then Marange diamond fields were an area of widespread small-scale diamond production in Chiadzwa, Mutare West, Zimbabwe. As a result, the word Chiadzwa is now associated with the recent diamond rush in Zimbabwe. It all began about 2006 and accelerated tremendously to legendary proportions. By mid-December 2006, around 10,000 illegal miners from all over Zimbabwe and abroad were working very small plots at Marange, and an immediate water, sanitation and housing crisis developed. The miners initially sold their diamonds to the government, but a black market rapidly developed, offering better prices. Gradually the government took over, following subsequent running battles with these illegal miners.

The grapevine in Zimbabwe has many juicy stories from the Chiadzwa diamond rush but most of these stories have largely remained oral. Mistaken Chipikiri is involved in a fight with one of his teachers at Mashoko Mission, Bikita. He is incorrigible and headstrong. Eventually he abandons Form six and decides to hitch hike to nearby Chiadzwa, hoping to find diamonds and make a shorter cut into life.

This becomes a jump into the dark and what he learns, we also learn through this book which keeps you at the edge of a cliff. To read this novel is to walk through a horrific dream. When you finally close it, you want a mental holiday!

Parts of this adventure tale, however, may remind you of TK Tsodzo's Pafunge, a novel of 1972 whose use of the hilarious has no match in Zimbabwean fiction. Gweja Nyumwawo  also extends the Shona vocabulary itself, capturing the language used in the community of these petty diamond miners.

For instance; the word Gweja stands for ‘illegal small time diamond miner.’ Gweja Nyumwawo! (illegal miner beware!) is a common call amongst these hounded miners on noticing that an unsuspecting colleague is about to be pounced upon by the security forces. Gwejerine is the female version of gweja. Gwejambuya refers to an old female miner. Gwejasekuru stands for the old female miner.

Kuherereswa means to be chased by the security forces. There is usually a lot of stampede. Dzemabhinya refers marijuana that the gwejas smoke to have courage. Munda means the diamond field itself. Zvinhu zvakafudhubhaiwa means food that is cooked for sale and looks very appetising. And there are various terms for diamond. Ngoda stands for the ordinary diamond. Ngoda-girazidombo is the diamond of a higher value than the former. Then clear glass refers to diamond of the highest value.

The gwejas even come up with slogans and songs in the fashion of political parties. They are conscious of themselves as a type. Sadly, they have no capacity to see the matter beyond the individual. The author follows a thin thread, investigating how one unruly boy tries to come to terms with his desire for cash and cargo. He is caught up in a matter whose extend he cannot adequately comprehend.

Here, the law of the jungle applies. There is a wide range of artisans serving the illegal mining community. Preachers, healers, prostitutes, fortune tellers and diamond buyers crisscross the bush. At one moment a woman gives birth to a baby and all the women cordon off the maternity spot. Mistaken Chipikiri bumps into his former teacher who is digging for diamonds and the master pleads with his former pupil not to take the story back home where he is a respectable member of the community.
Mistaken Chipikiri discovers that the miners operate in numerous syndicates. These are small groups of vigilantes around certain war hardened fighters. The groups defend themselves against both the police and rival groups. They are responsible for ferrying home dead bodies, when colleagues fall by the way.There are such groups as Wagerwa Wagerwa (which means let the weak suffer) a group that Mistaken Chipikiri joins. The men in this group dare the police and soldiers on the field and their ‘wives’ do the domestic chores at the base which is often in the rear. Eventually the loot is shared equally amongst the group and some track back home to buy cattle and property. Chipikiri’s group get to the point of even buying a car!

There is also another group called Unemployment Benefit which is led by Dhiredhi who is a terror in this community. He collects taxes and protection fees. He is also ready to stab anyone who crosses his path. In one moment of madness, he tears apart a whole police dog with bare hands. Whenever he earns money, he retreats to Birchenough Bridge or Nyika growth point to be merry, returning only when he is broke.

This story is a must read for government officials, sociologists, psychologists, miners and others. Although it is clear that Reason Kufonya was looking for a clean moralist exit, what is clear is that if we are to benefit from our resources, we need a collective, orderly and nuanced approach. The gweja character in this story dramatises our primitive desire to snatch, run and eat behind the bushes.
+Reviewed by Memory Chirere
Posted by kwaChirere at 6:07 AM