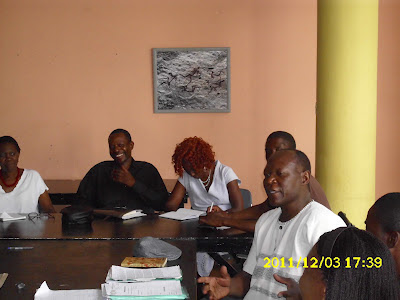 picture from the previous meeting

As a response to the request of the writers at the first Harare writers meeting of Saturday 3 December 2011 at the National Gallery of Zimbabwe, ZWA is inviting you to its second Harare members meeting to be held at the British Council, 16 Cork Road, Belgravia (opposite the South African Embassy) on Saturday March 10, 2012 from 1:00pm to 4:30pm.

This time the discussion topic is ‘How I Create’ and Musician LEONARD KARIKOGA ZHAKATA and Writer DAVID MUNGOSHI will be talking about their experiences as creators. Alongside this will be some readings and discussion on what ZWA has encountered so far and our plans to fully go national. A substantive agenda will be sent to you very soon.

Those who were not at the first meeting are reminded to bring $10 membership fees. Remember: the major objective of ZWA is to bring together all willing individual writers of Zimbabwe in order to encourage creative writing, reading and publishing in all forms possible, conduct workshops, and provide for literary discussions.

Zimbabwe Writers Association (ZWA) is the newest nationally inclusive writers. Organization whose formation started in July 2010 leading to the AGM of June 4, 2011It was fully registered with the National Arts Council of Zimbabwe in January 2011. Zimbabwean writers have taken the initiative to coordinate themselves to form an organisation to represent them and defend their interests. The birth of ZWA was a culmination of self initiated efforts and activities taken by writers of diverse backgrounds with the vision of developing into a strong and dynamic umbrella organisation for writers in Zimbabwe.
Inserted by Tinashe Muchuri, ZWA Secretary
ZWA’s By-line: A WHOLE WORLD IN A WORD
0733 843 455/zimbabwewriters@gmail.com
Posted by kwaChirere at 2:52 AM