Yvonne Vera's mother does it again! 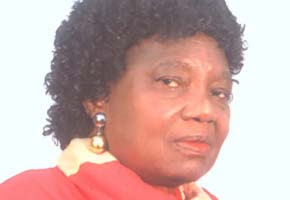 Embracing the Cactus By Ericah Gwetai
Printed by Mambo Press, Senga Road, Gweru, 2012
Isbn: 9780797450653
144 pages
Reviewer: Memory Chirere
What happens when a married city man marries a second wife without the knowledge and consent of his people and that of his rural wife? Turmoil and tenacity. Such an experience is at the centre of Embracing the Cactus, a novel by Ericah Gwetai nee Mugadzaweta. She is mother to late writer, Yvonne Vera.

It is around 1950 and train driver, Sabelo Moyo meets Janet Gumede, a very beautiful Bulawayo nanny at Shangani railway station. They fall for each other instantly. Within a year, they get married. But Sabelo is already married to Immaculate with whom he has three children. Immaculate stays in Sabelo’s rural home not far from Bulawayo. Sabelo and Janet are fully aware of what they are doing but are not prepared to follow tradition.

When Immaculate eventually learns about it, she becomes bitter because tradition has not been followed. She has been taken for granted. The headman in Sabelo’s own village explains what should have happened: “Polygamy is part of our culture. There are, however, certain procedures and rituals to be followed and undertaken by a man who intends to take in a second wife. First… the man should send his sisters to inform his first wife about his intention… If she allows her husband to take another wife a ritual is performed… A goat is slaughtered and shared equally between the first wife and her rival. The goat symbolises the man that the women would share equally… the ritual is called ukuhlanganiswa meaning to be united with your rival.”

Ill luck strikes and Sabelo loses his job in Bulawayo. He has no choice but to take Janet and her soft urban children to face Immaculate and her rural children. A bitter turf war begins. Janet and her children are declared trespassers in Immaculate’s compound. Immaculate decides where they are going to be sheltered temporarily. They have to seek her clearance whenever they have visitors or want to have a family function. Immaculate decides that since she is Sabelo’s legitimate wife, she can have Sabelo in her bedroom six nights a week only allowing him to see Janet once a week.

One day Janet travels on the scotch cart from the bus stop with one of Immaculate’s sons. From nowhere, the boy rudely tells Janet that she must get ready for him in the event that Sabelo dies or becomes invalid. Janet is shocked and notices that the boy may actually rape her. She escapes into the bushes, calling for help. The boy pursues his father’s illegitimate wife. His mother has been saying many nasty things about this woman from the city. As they are doing that Janet tragically falls into a smouldering saw mill dump and is burnt severely. Her legs have to be amputated.

As if that is not enough, Janet is rejected by her own daughter, Precious. Her complaint is: Mother, why did you marry father when you knew that she was married to another woman? Precious has a meeting with Immaculate just to say: I am sorry that our father went on to marry our mother, violating your own marriage. Precious sides with Immaculate against her own mother. Eventually she escapes to Australia where she becomes a nurse. And when there is turmoil in her family back home, she writes a letter clearly stating: GIVE ME A BREAK! How many daughters out there can stand with their mother's love rivals against their very own mother? How many daughters can severely punish their own mothers for marrying their fathers?

This book is going to give all those readers and scholars who are into feminism, womanism and related ideas something to think about. Here is an African tradition ukuhlanganiswa that demands that women be respected and consulted in matters that involve them. Yet more often we are told that it is tradition that oppresses women when in most cases it is actually abuse of tradition by the uncaring that brings women down.

Embracing the Cactus is Gwetai’s debut novel and her third book. Previously, she wrote Realities, a book of short stories and Petal Thoughts, a must read biography of her late daughter, Dr. Yvonne Vera. The biography could well be a ‘first’ ever to be written by a mother about her child. She died in April 2005. To date, the late Yvonne Vera could easily be the most outstanding woman writer from Zimbabwe writing in English.

However, readers must be warned that although Ericah Gwetai is mother to Yvonne Vera, she is her own woman. Here you do not find Yvonne’s intense prose poetry. What is on offer here is a deeper and more amazing understanding of African cultural intricacies, rendered in a far simpler and unaffected prose. Her episodic chapters and very unpredictable plot constitute the Ericah Gwetai signature.

However, the production of Embracing the Cactus is not impressive. On pages 2, 3, 5, 18,114 and in so many other places, the paragraphing and annotation are not regular. One wonders if the editors and typesetters ignored the fact that this book would definitely attract an international audience. The cover too was rather hastily done. If the artist was going for an abstract representation, then it was overdone. Besides, it is not any abstract painting that can smoothly transform into a useful picture for a book cover.
Posted by kwaChirere at 4:10 AM