My key moments in Zimbabwean Literature 2013 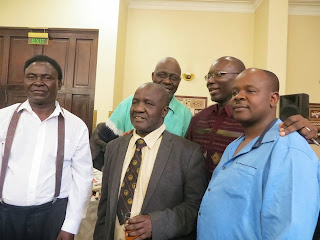 (Chiwundura Moyo, T.K.Tsodzo, Chinodya, Mabasa and Chirere during the Harare launch of Mabasa's Imbwa Yemunhu.)
For me the highest point in Zimbabwean Literature 2013 was the new section of the Zimbabwe International Book Fair called the ‘Literary Evening’ which was held at the Book Café, Harare alongside the Book fair in September.


We were used to reading about Dangarembga, Chinodya, Chiundura Moyo and Ticha Muzavazi but suddenly these four had been selected for this outing and were indeed were here with us. We were not reading their books but they were reading passages from their books to us! We sat there and slowly sipped our drinks and listened. We could even ask them questions. We could ask for their contact details.  This was a rare moment for reader and writer to directly interact.


Did I know that Tsistsi Dangarembga possesses such a clear performing voice or that; for some time now, she has been trying her hand at children’s literature?


Shimmer Chinodya has a broadcaster’s voice. He has such a beautiful teacher’s baritone that he needs to move on and read some of his stories on the radio, especially from Can We Talk and Other Stories.


I never thought Aaron Chiundura Moyo played the pen-whistle like Spokes Matshiyane! I didn’t know that he has the gift of the gab and could reminisce on his work and eventful life, deep into the night. I thought all about him was books and books!


I came away from the evening even more convinced that Ticha Mazavazi will continue to be my favourite Shona poet. And elsewhere, I indicate that “Muzavazi is aware of the infectious force of the Shona verb more keenly than any other Shona poet that I have read to date.”


Maybe the least talked about event of the year (because it eluded the local media) is when David Mungoshi was invited to be guest speaker at a state function on November 12 in Minna, Niger State, Nigeria. The occasion was the third MBA National Literary Colloquium. Writers are rarely invited to officiate at state occasions. This was quite an honour.


I came across four very significant books by Zimbabwean authors in 2013 and I notice that each of them occupies a special place on my mind.


As the year 2012 drew to an end, I read Spiwe N Mahachi- Harper’s Footprints in The Mists of Time from abba press in the United Kingdom. What first struck me was the sheer size of the novel. I quickly made an estimate count and found a whopping 181 008 words. This outruns Wellington Kusena’s novel of 2011; Dzimbabwedande, which is the longest Shona novel at 108 264 words. Mahachi Harper’s becomes the longest novel by a Zimbabwean, I declared and there was no refutation from any authoritative quarter.


Footprints  is a 419 broad paged historical novel, tracing about four generations of workers of Malawian origin, beginning with Bhaureni Nyirenda’s journey from Nuhono village in the Nkotakhota District of then Nyasaland in 1899 to settle at Southern Rhodesia’s Patchway Valley Mine in Gatooma District. You move from Bhaureni to his son Masauso, through to grandson Chakumanda and great grandson, Mavhuto (in the present day) and their wives, children and neighbours who are variably from Northern Rhodesia and Mocambique.


Although I have come to know the author more and more, I have felt that this was the clearest show of sheer immense narrative tenacity and talent in the past year!


Even Reserve Bank Deputy Governor of Zimbabwe, Kupukile Mlambo took note of this book and did an illuminating review which was widely read in the media.  The Deputy Governor wrote: “The novel, which is essentially about labour migrations in Southern Africa can be read through multiple lenses. There is an extended debate, often couched in broader economic, political and social terms, on the causes and effects of migration on the receiving and sending countries.”


Later on, NoViolet Bulawayo’s We Need New Names came out to become the most celebrated novel by a Zimbabwean in 2013. I had harbored great expectations because I had known that the first chapter to this novel, ‘Hitting Budapest’ won No Violet Bulawayo the 2011 Caine Prize for African Writing when it was presented as a separate short story.


The novel’s central character, Darling is always looking at foreign territory with eyes of home and glancing back at home through the teary eyes of new experience and beginning to re-read ‘home’.


The pregnancy of detail that you find in this novel, like the descriptions of the onset of Operation Murambatsvina, is one of its strengths:


“…the bulldozers appear boiling. But first before we see them, we hear them. Me and Thamu and Josephat and Ncane and Mudiwa and Verona are outside playing with More’s new football, and then we hear thunder. Then Ncane says, What is that? Then Josephat says,  It’s the rain. I say, No, it’s the planes. Then Maneru’s grandfather comes sprinting down Freedom Street without his walking stick, shouting, They are coming, Jesus Christ, they are coming! Everybody is standing on the street, neck craned, waiting to see. Then Mother shouts, Darling-comeintothehousenow! But then the bulldozers are already near big and yellow and terrible and mental teeth and spinning dust. The men driving the bulldozers are laughing. I hear the adults saying, Why why why, what have we done?”


The novel plunged the Zimbabwean literary scene into celebration as it was shortlisted for the Man Booker Prize. It was also to appear on the Guardian First Book award shortlist and eventually won the South African Jenny 2013 Book of the year Award. The novel does not spare the establishment in Zimbabwe. It  does not spare even the pretentious western world. This is a novel that demands very careful reading and, do not be quick to feel attacked or praised. To read NoViolet Bulawayo's new book is to take constant departures and arrivals, inside out and upside down until you lose count because she is constantly very aware of the numerous points of view to the subject of going away from Zimbabwe and the actual politics. She is also aware that the phenomenon that she is working on is actually in motion and that Zimbabwe will one day rest on any of her many intriguing sides.


Then there was the biggest surprise of the year - Charles Mungoshi’s Branching Streams Flow in the Dark, published by his family. The prize winning author of Coming of The Dry Season, Waiting For The Rain and Kunyarara Hakusi Kutaura? who had been ‘silent’ ever since his major single publication, Walking Still in 1997, had chosen a special way of returning. As his wife, the acclaimed actress Jesesi Mungoshi states in the dedicatory note, ‘it took Charles over 20 years to write this book and he was still perusing through it when he fell into a coma on the 30th of April, 2010’.


During her darkest and loneliest moment, when her baby dies of AIDS and her husband runs out of the house and her mother is virtually unkind, Serina Maseko sees through herself and others, as if she were beyond pain and reproach. She is floating because during this period, before the advent of Anti Retro Viral Therapy use in the management of the Acquired Immuno-Deficiency Syndrome (AIDS), being diagnosed as having the infection is an automatic death sentence.


University of Zimbabwe lecturer Josephine Muganiwa had this to say about Mungoshi’s new novel: “Loving hurts but... it also thrills! Meeting and parting is also part of the game. This book answers the classical questions: Is it possible for a man to love two women at the same time? What is love? Is it possible to fall in love with the idea of being in love? What is the place of polygamy? What is marriage? Is marriage the church certificate or the intertwining of lives? Is it possible to have a soul mate; the kind of relationship between MaDube and Serina’s father? This story is fluid and it carries you along like a river. I can still hear Saidi playing his sax in the sky, at the Great Conference. A must read for all!”


Those not adequately acquainted with Mungoshi literature beyond Coming of The Dry Season or Ndiko Kupindana Kwemazuva were left wondering if this was really Mungoshi’s pen even when Jesesi Mungoshi told them that she has the whole original script in Charles Mungoshi’s long hand. The long, elaborate and reflexive sentences that (over)ride on the comma and conjunction are typical and are there for all to see:

“… If you were looking at Mother looking at Father, then Father appeared to be dirty, uncouth, uncivilised (Mother’s favourite word), backward – and you found yourself lost in seeing him like that… you would convince yourself that this was your original observation of him... on the other hand, if you were looking at Father looking at Mother, you saw shame and falseness right through everything, starting first and foremost, with the highly out - of – key voice shrilling for attention so that it jarred on the nerves like a child running a razor blade through velvet skin… Mother would not hear Father. She would simply see her poor husband, Samuel Maseko, as an also-ran, second-hand sort of lost soul…”

Who could have the temerity to write a book and claim that it was written by Charles Mungoshi?

Then before the year 2013 really ended, veteran Shona novelist, Ignatius Mabasa struck with his offering entitled, Imbwa Yemunhu. Here you come across Musavhaya or Musa in brief.  Usually Musa becomes jelly kneed when he comes across beer and beautiful women. This time he even wants to grab someone’s wife. She is called Juli. Juli’s husband is an ordinary lay about and petty trader called Richard who is not fazed by his noncommittal ways. Musa is pressed by his own mother and elder brother to marry Hazvi when he has no any feelings for the girl. He plays up in order to silence his community which expects him to get married. Juli wishes she had a man like Musa instead of Richard. But she is stuck with Richard! Hazvi wishes she had not had the misfortune of knowing her father. Richard wishes he had not fallen into this marriage with Juli because it is an apparent trap.


For me, Imbwa Yemunhu is the most experimental offering of the year. It is dream and reality. It flows like a jagged river. You find here, to your amusement  some real life characters of Zimbabwe like the late Simon Chimbetu, musician Albert Nyathi, writers Shimmer Chinodya and Tsitsi Dangarembga, talking and being talked about. They are all beautifully engineered that you stop breathing until you come to the very end.


I notice that as I write, the year has not really ended. But if it ends like this, some good books of 2013 will spill into 2014. I know that there is something cooking at Booklove in Gweru. Emmanuel Sigauke, and your editor, Makadho, can you hear me?