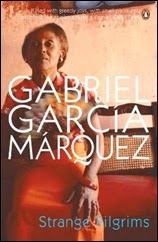 The Nobel Prize winning Gabriel García Márquez who died on 17 April 2014 was considered by many as the greatest author ever in the Spanish language.


Marquez’s most successful work as a writer is the long and expansive novel,  One Hundred Years of Solitude which became a huge success in the years after its publication in 1967 selling more than 10 million copies in more than 30 languages! It made García Márquez a leader of the Latin American literary "boom" and an international phenomenon.


His novels, The Autumn of the Patriarch” (1975) and Love in the Time of Cholera (1985) are some of his greatest masterpieces. But his short stories are also some of the world’s best. My favourite, Strange Pigrims, published originally in Spanish in 1992 constitutes the author’s fourth short story collection. In Strange Pilgrims, the reader finds Garcia Marquez’s Latin American characters doing their best to survive on European soil.


Of all these character, Marquez’s elderly ones are more intriguing. They reveal certain internal resources which they have been scarcely aware of or unable to use before, bringing out how it sometimes feels to be old in a world that scarcely notices the challenges of ageing.


Maria dos Prazeres
Maria dos Prazeres, protagonist of the story bearing her name, is a Brazilian mulatto woman living in Barcelona. She is a self- retired whore in her seventies who is planning for her imminent death, which was revealed to her in a dream. Maria is removed from her own country (Brazil) when her mother sold her to a Turkish official, who after enjoying her without pity, abandons her, leaving her “with no money, no language and no  name”. (p109) Now, old and seemingly useless to herself, Maria goes about the business of deciding on her funeral with matter-of-fact efficiency.


She has already purchased her burial plot and taught her dog, Noi, who sheds real tears, to locate the plot in the cemetery and cry over her grave. She has also made arrangements for a neighbour girl to take care of Noi after she dies and to let him loose on Sundays so that the dog can visit her tomb. Then, one rainy night, she and Noi hitch a ride home to get out of the weather. Maria trembles in the darkness, certain that the mysterious man who gives them a lift and asks to come up to her apartment is the Grim Reaper himself. Then, to her delight and surprise, she realizes that the stranger is actually a customer.


However, this story’s potency lies in the intricate ways in which the author gradually builds up towards the fact that; Maria does not know herself anymore because of her calendar age.


When she hitches a ride in the car of an unknown young man, in a raging storm at first, ‘she felt she was in a strange, happy world where everything was arranged ahead of time.’(p112) This is the magical moment for her because it pushes her away from brooding over old age and subsequent death.  She even feels ‘intimidated by her misery.’(p112) and on looking closely at the man, ‘she thought he was not handsome but had a distinctive kind of charm.’ (p113) When the man furtively looks at her ‘she felt ugly and pitiful.’ (p113) And ‘she regretted still being alive at her age.’ (p113)


This means that she is, unknown to herself, still on the lookout for a man. When the man decides to respect her and drive her right to her front door instead of letting her off at the corner, she looks at him and sees ‘a male stare that took her breath away.’ He asks profusely to come in and join her even when she protests against it.(p113)And when he demonstrates his desire for her by insisting on locking up the car and following her upstairs, for apparent passionate sex, ‘she knew it had been worth waiting for so many years…’ (p115)
Bon Voyage, Mr. President
In the opening short story to Strange Pilgrims, “Bon Voyage, Mr. President,” a deposed Latin American president is in Geneva for medical advice and treatment concerning a mysterious ailment. An ambulance driver, who happens to be a fellow countryman, takes his opportunity to ingratiate himself with the former leader, hoping to turn their friendship to his advantage. The ageing ex-president is not wealthy as thought, but destitute, and must be supported by his newfound acquaintances. Upon rescinding his ban on vice: drinking, eating red meat, smoking, eating shellfish and others, he finds happiness in friendship and being alive despite old age and being forced out of his country. Homero, the ambulance driver for the hospital in which the deposed president is being cured, has arranged with a funeral parlor to hawk its services to mortally ill patients and plans to sell the former politician a complete package, including embalming and repatriation.


The story begins with:


He sat on a wooden bench under the yellow leaves in the deserted park, contemplating the dusty swans with both his hands resting on the silver handle of his cane, and thinking about death. (p3)


The above lines create an image of a very spent, lonely and tired person and from the onset; one guesses correctly that this must be an old person in distress and regret. But there remains, for a discerning reader; visible traces of a life of vigour, careful self- cultivation, glory and plenty rioting from underneath this wreck:


He had the arrogant mustache of a musketeer, abundant blue-black hair with romantic waves, a harpist’s hands with the widower’s wedding band on his left finger and joyful eyes. (p4)


Then the cruellest sentence in this arrangement tries to supersede all that: ‘The years of glory and power had been left behind forever, and now only the years of his death remained.’ (p3) Beneath that, is even a crueller rendition of the plight of the old man. He suffers from an insistently ‘devious’ pain whose position in his body the doctors had not been able to locate in both Martinique and Geneva. As they search for it very actively all over his body, they go to and fro almost like officers after a criminal:


They looked for the pain in his liver, his kidneys, his pancreas, his prostate, wherever it was not. Until that bitter Thursday, when he had made an appointment… at the neurology department with the least well-known of the many physicians who had seen him… (p4)


And when they locate it, it is as if the old man’s pain is a little devious animal, as hideous as it is devious. It is described as a very active thing with a youthful life of its own:


“Your pain is here,” he (neurologist) said…His pain was improbable and devious, and sometimes seemed to be in his ribs on the right side and sometimes in his lower abdomen, and often it caught him off guard with a sudden stab in the groin. The doctor listened to him without moving, the pointer motionless on the screen. “That is why it eluded us for so long,” he said. (p5)


One has a feeling that the old man is crushed. At his advanced age; he cannot undergo an operation whose results are certain, cannot afford the fees for the operation all by himself, needs moral support which he cannot mobilise at this point since he is a stranger in Geneva and worse, a deposed president.


But the old man is intrinsically as indefatigable and daring too as the pain in his body. In the face of apparent doom, his whole life drama replays and recreates itself, seemingly pathetic but blest with an uncanny ability to ride through a storm.


He becomes more resolute, returning to the coffee that health experts had previously managed to turn him away from. He becomes realistic, agreeing to acquaint with Homerio and wife and eventually allowing them, when the worst comes to hand over jewellery and personal accessories to them to sell in order to raise his operation fees. He strips himself for the sake of his health. Homerio’s wife, Lazara eventually realises that the old man is still the graceful, cunning and calculating politician of old in spite of his ill health, old age, loneliness and poverty. To her, he gradually moves from being a ‘What a son of a bitch!’(p24) to being, as she admits to herself:


…one of the best looking men she had ever seen, with a devastating seductive power and a stud’s virility. “Just as he is now, old and fucked up, he must still be a tiger in bed,” she said. (p24)


After his five hours of surgery and subsequent recuperation, the old man demonstrates a vicious desire for life and it is said that: ‘He devoted himself to his rehabilitative exercises with military rigor…’ (p33)  He struggles on until his return to the Caribbean and subsequently moots a return to politics. Lazara’s description of him is one of the most memorable sentences in this story: ‘My God! Nothing can kill that man.’ (p34)


The seeming defeat of Maria and that of the deposed President is only an initial outlook. The resilience and constant retreat to the drawing board that you see in the elderly characters in these stories, confirm in a huge way the views that- just as sure as there is loss, there are gains that come with old age. These gains have been largely overlooked. Although young people, for example, may be fast and agile, they lack experience and knowledge. Their futures demand that they focus on their own personal advancement more than that of the broader community. The impressive physical resilience in the young is not matched by the emotional resilience, which comes much later in life. Marquez’s elders crawl towards a certain destination and new pedestals
+(By Memory Chirere)
Posted by kwaChirere at 7:43 AM