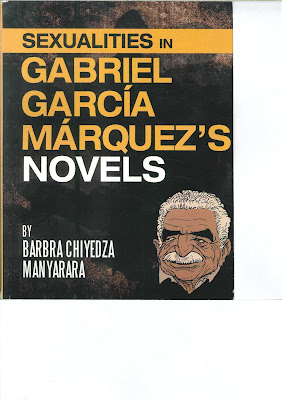 The late Nobel Prize winning Gabriel García Márquez, who died on 17 April 2014, is considered by many, including myself, as the greatest author ever to be translated from Spanish to English. I also appreciate that some consider him the greatest author in the Spanish language. I also agree that Marquez’s most successful work as a writer is the long and expansive novel,  One Hundred Years of Solitude. I hear that it became a huge success in the years after its publication in 1967, selling more than 10 million copies in more than 30 languages! It made García Márquez a leader of the Latin American literary "boom" and an international phenomenon.

All that may be easy to say, but in front of us is Barbra Manyarara’s book on Marquez. I became aware of Barbra Manyarara of the University of Zimbabwe’s immense interest in  Gabriel García Márquez by accident when she looked smitten by the great author’s death to the extent of agreeing to do an obituary for him for my blog, KwaChirere, on 25 April 2014: http://memorychirere.blogspot.com/2014/04/my-old-man-marquez-is-gone-barbra.html When it came, I saw that it was entitled:  My old man, Marquez is gone! I uploaded it as it was, word for word. In that piece, Manyarara mourns her literary hero:

“The news of Gabriel Garcia Marquez’s passing on Thursday 17 April 2014 quickly filtered down to me although I was far away from media access. Two of my undergrads sent me messages of condolences, followed by another two from family overseas. They had been purchasing most of my study material on this writer, seeing as Amazon will not deliver to Zimbabwe. Each of the messages started with, “Mama, mudhara wenyu afa.” (Mom, your old man is dead.) Another of my callers was my own hubby telling me, “Your old man is gone,” to which I retorted, “I thought you were my old man!”

To all these concerns I made the gentle reminder that Gabriel Garcia Marquez has only been promoted to a better place without pain because authors do not die, they live on through our reading of their works. All these messages recognise the special relationship I have with Gabriel Garcia Marquez for I have spent the last three years studying his representations of sexualities in several of his works.

Literarily, I first met Gabriel Garcia Marquez when I was recovering quite unsatisfactorily, (according to my doctor), from a life-saving op and running out of satisfying reading material. In the end it was a choice between a lame copy of Garcia Marquez’s One Hundred Years of Solitude (1967) or Voltaire (without the benefit of even schoolgirl French). My copy of One Hundred Years clothed with the usual Penguin austerity starts with page 377, so I meet Jose Arcadio at a moment when he has taken up with children in a relationship whose significance at this point, I have no idea of at all. Still I am intrigued and flip through to discover that after page 422, there is page 41. From page 41, I could now read through to the end, that is, back to page 422 again. Despite missing that poignant first sentence, “Many years later, as he faced the firing squad, Colonel Aureliano Buendia was to remember that distant afternoon when his father took him to discover ice,” I was fascinated!”

That is Barbra Manyara’s life with Marquez!  I was first introduced to Marquez by the then writer-in-residency of the University of Zimbabwe, late writer Chenjerai Hove in 1991. Hove spoke to us lavishly and vividly about Macondo, a town in Marquez’s One Hundred Years of Solitude as if he actually came from it. It was so elaborate that we felt sorry for ourselves for not having read this novel. Suddenly I also wanted to go to Macondo like our mentor. I immediately set out to read the novel! It was a monumental mistake because since then, I have never recovered!

I have since read a lot of Marquez literature. I must confess that I prefer the Marquez short story. I particularly love his ‘Maria dos Prazeres.’ Maria,  protagonist of this story , is a Brazilian mulatto woman living in Barcelona. She is a self- retired whore in her seventies who is planning for her imminent death, which was revealed to her in a dream. Maria is removed from her own country (Brazil) when her mother sold her to a Turkish official, who after enjoying her without pity, abandons her, leaving her “with no money, no language and no name”. (p109) Now, old and seemingly useless to herself, Maria goes about the business of deciding on her funeral with matter-of-fact efficiency.

She has already purchased her burial plot and taught her dog, Noi, who sheds real tears, to locate the plot in the cemetery and cry over her grave. She has also made arrangements for a neighbour girl to take care of Noi after she dies and to let him loose on Sundays so that the dog can visit her tomb. Then, one rainy night, she and Noi hitch a ride home to get out of the weather. Maria trembles in the darkness, certain that the mysterious man who gives them a lift and asks to come up to her apartment is the Grim Reaper himself. Then, to her delight and surprise, she realizes that the stranger is actually a customer.

I also read and re-read ‘Bon Voyage, Mr. President.’ The story begins with:

He sat on a wooden bench under the yellow leaves in the deserted park, contemplating the dusty swans with both his hands resting on the silver handle of his cane, and thinking about death. (p3)

The above lines create an image of a very spent, lonely and tired person and from the onset; one guesses correctly that this must be an old person in distress and regret. But there remains, for a discerning reader; visible traces of a life of vigour, careful self- cultivation, glory and plenty rioting from underneath this wreck:

He had the arrogant mustache of a musketeer, abundant blue-black hair with romantic waves, a harpist’s hands with the widower’s wedding band on his left finger and joyful eyes. (p4)

Then the cruellest sentence in this arrangement tries to supersede all that: ‘The years of glory and power had been left behind forever, and now only the years of his death remained.’ (p3) Beneath that, is even a crueller rendition of the plight of the old man. He suffers from an insistently ‘devious’ pain whose position in his body the doctors had not been able to locate in both Martinique and Geneva. As they search for it very actively all over his body, they go to and fro, almost like officers after a criminal!

But, I understand what Manyarara sets out to do in this book in your hands. It is about  interrogating Gabriel García Márquez’s representations of sexualities in Chronicle of a Death Foretold (1981); The Autumn of the Patriarch (1975); One Hundred Years of Solitude (1967); The Sad and Incredible Tale of Innocent Erendira and her Heartless Grandmother (1972); and Memories of My Melancholy Whores (2004).

There is an understanding that although there is a lot of critical energy already expended on Marquez, most of it has dwelt on the author’s use of magical realism as a writerly mode. Critics have also dwelt on the literary influences that have impacted on him and how he in turn, has influenced other writers. Critics have also discussed García Márquez’s employment of prostitution as a metaphor for the exploitation of the colonised people by their European colonisers. Manyarara contends throughout this book that there remains a yawning gap in scholarship in terms of understanding other constructions of sex and sexuality as manifestation of other forms of exploitation in García Márquez’s literary works. This scholarly gap has become particularly glaring because of the wave of public animosity towards García Márquez’s representations of sexualities in his latest novel, Memories (2004).

I hope that this book will manage as Manyara asserts to show that “García Márquez’s employment of the sexuality motif enables him to delve into many worldwide current concerns such as the irrelevance of some socio-cultural sexual practices; commercial sexual exploitation of children; the different manifestations of prostitution; and female powerlessness under autocratic rule.”

For me, Barbra Manyara’s book is the most important new book on Latin American literature that I have read this year, 2016. This is an attempt to break a new window through which we can begin to read Gabriel Garcia Marquez.