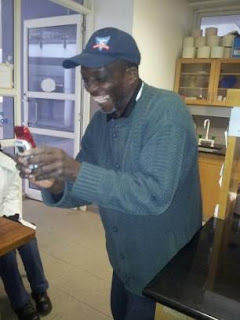 (picture: Samuel Chimsoro)
+The Zimbabwe Writers Association (ZWA) are going to hold a reading and discussion event in Harare on Saturday 18 Feb 2017, at the Zibfa offices, from 12 to 4pm and one of the issues on the agenda is the late poet Samuel Chimsoro. Below here is a write up by Musaemura Zimunya on the life and work of Samuel Chimsoro…

Most followers of Zimbabwean literature first came across the works of Samuel Chimsoro in his first collection of poetry entitled Smoke and Flames published in 1978 by Mambo Press.  However, this eminent Zimbabwean poet had been operating under the radar for close to a decade and half from the late ‘60’s until then, writing and refining his craft almost entirely out of the public view.  To him it mattered little whether he got mentioned or published in the then prevailing platforms such as Chirimo Poetry Magazine, Two Tone or Rhodesian Poetry.  For him, it never seemed to matter to enter his poetry for the so many competitions on offer, whether English or Shona.


Nevertheless, a few people were aware of this enigmatic character.  One such was Toby Moyana, the great mentor of so many authors then, who had not only taught him along with Berth Msora, the dramatist, at Nyatsime College, but nourished his thirst for creative writing in the mid-‘60’s.  Moyana was one of those great lights that light up the sky and vanish like a meteor before the world could even notice the brilliance of the phenomenon. Back in 1970, he put together samples of the work of Julius Chingono, Musaemura Zimunya, Samuel Chimsoro - the first two poets having already been published in Chirimo - including his own in order to forward them to Heinemann Publishers who were by then fully established as the preferred destination for many aspiring African authors.  Sad to say that all of Moyana’s efforts came to nought.


Indeed, so secretive and enigmatic was Chimsoro in his endeavours that even the great Kizito Muchemwa who compiled Zimbabwean Poetry in English, the first collection of poetry by Rhodesian Africans, completely missed Chimsoro. Smoke and Flames (1978), published by Mambo Press, his first poetry collection in English.  Dama Rekutanga: Muunganidzwa weNhetembo, published by College Press, 1990.


Samuel Chimsoro originally served his apprenticeship as a poet writing in English and so it is no surprise that his first collection was in English.  Although Smoke and Flames may not represent the vast scope of his creative talent, it is a collection through which critics and lovers of poetry may peep into the mind of the creator himself.  Chimsoro loved metaphors that depict the human experience, emotionally, socially and philosophically.  Almost every poem in this collection derives its energy from this very raw, lyrical force of his creative vision while at the heart of his complex metaphorical universe lies the point: the message, the radial centre of a spider’s interconnected mesh. The following lines from “Leah” may serve as an example:

A stampede of words

Stormed the pines but

For my long arms to coil

Round the strained web

Of the shredded soul –

When it was too late to gather

Words lost in the snoring foams

Of my fermenting voice.

To a noise that could

Even then love rolled over listless ears.

This poem also happens to belong to a sequence that explores the myriad situations that make perfect love a recalcitrant proposition.  However, lest we forget, Chimsoro is not merely an aficionado of decadence and passion as some of his poems may suggest.  He is one who also lived through the pain of oppression that characterised the era of settler colonialism and did not shirk from expressing his conscience and protesting against the system.  Thus, the section entitled “Zuva Huya-Huya” is devoted to the cause of the liberation struggle and there are many memorable verses, of which the following titles can be taken as an example: “On Waking Up”, ”To Borehole Drillers”, “Baskets and Stones” and “Colours Grow”, to name just a few.


Chimsoro’s next collection of poetry is Dama Rekutanga which, roughly translated means “The first word”, a self-explanatory introduction of the author’s venture into Shona poetry.  In this collection, the poet freely exercises his full repertoire of craftsmanship earned from his English poetry to full effect.  In these poems we see and hear the poet as a teacher and sage, given to proverbial bursts and turns of phrase to dramatise his message.  The following lines from “Sekuru kumuzukuru” may serve as a good example:

Chimsoro published two prose writings, Nothing is Impossible, a novel and Hovhiyo neHowa, a little tale. Nothing is Impossible (1990), is a biographical novel based on the life of Zimbabwe’s earliest and, perhaps, most successful insurance agent, Paul Mukondo.  As in all biography, Nothing is Impossible is a story of growing up.  It traces the experiences of Simbai, a young Rhodesian African who grows up desperately poor but survives the brutality of farm labour and colonial exploitation through the work ethic inspired by his family, especially his grandmother whose words have a prophetic ring for all who would aspire to overcome adverse circumstances:

All that is expected from us is the vision of the seed, to accept

to be buried and then germinate and then grow.  You are a man.

Manhood should be your ground....I am saying this to all of you so

Not surprisingly, Simbai works his way into becoming a member of the Million Dollar Round Table, an event held annually in New York celebrating the achievements of insurance salesmen who have broken the million dollar barrier around the world.


Hovhiyo neHowa is a little tale about a wife who, in a bid to pamper her husband’s appetite for mushroom ends up preparing a tempting dish which has a potential to destroy the family through poisoning. Written in Shona, the short story itself succeeds through the intriguing plot which keeps the reader in suspense, unsure what will become of the family who eagerly anticipate a sumptuous meal of mushroom whose identity no one can confirm. The suspense is climaxed when the son who has taken the dog which had eaten some of the dish starts behaving strangely, eating grass, retch and, finally, vomiting.


It is remarkable that Chimsoro has not found academic challengers who have the courage to tackle this most gifted of poetic craftsmen to have emerged from our midst.  One supposes that part of the fear of tackling this author arises from the tragedy that he has left no record of any interview – audio or press – that may help to unlock his artistic journey, his modus operandi, his beliefs or his vision.


So, we are stuck with word puzzles whose references are not always accessible and remain as obstinately secret and private as Chimsoro’s personality.  So obstinately clandestine that even his family could find only one photo of a remarkably cheerful face – as though it was stolen at an unguarded moment - which is at odds with the picture of an intractable man we are left with.  Perhaps, the organisation of an occasion by The Zimbabwe Writers Association with the support of ZPH to celebrate his works will help alert literary scholars and critics and trigger overdue interest.
-Musaemura B. Zimunya- 9 February 2017, Harare

Posted by kwaChirere at 2:10 AM