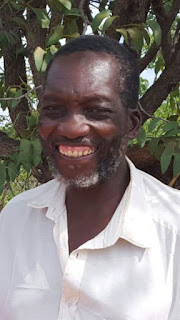 Sam was older than me by one year. In the early 70’s Sam and I played together as sekuru nemuzukuru. Sam was poetic and would write novels. He could also draw. I was a teacher with a deep interest in fine art. I lived at Zimbabwe Flats on Jabavu Drive in Highfields where I worked as an art  teacher at Nyarutsetso Art Centre.  In the 70’s Sam lived in Mbare with his parents.

Sam had a special interest in Jazz and Blues music by Champion Jack Dupree, B. B. King, Aretha Franklin and Lewis Armstrong, to name but a few. We would listen to this music trying by all means to derive meaning out of it. Sam would organise gigs in selected halls in Mbare where popular music would be played to entertain the young people. In those days, the Super60 was the state of the art in musical players and Sam had one. It was a status symbol to own such equipment.

We took time to look at art and to enjoy it and we drew pictures together. Sam was an ardent drawer as evidenced by the pencil drawings he did of his grandfather. The idea then was he would write the books and then I would illustrate and get the books published.

We took turns to visit each other and he would cycle from Mbare to Highfields and back. When I visited him at Mbare, we would listen to Blues and Jazz on his Super 60 Hifi musical system that produced super stereo vibes. Up to this day, I play music by B.B. king, Champion Jack Dupree and Lewis Armstrong. That was the other side of Sam Chimsoro. He was very influential in a very positive manner.

We were young persons who were not too keen on girls and girlfriends, until he got hooked onto Winnet and I on Terry.

Sam was gifted at critical analysis and would delve into analytical geometry and metaphysics. We would exchange books on calculus where he encouraged me to study mathematics like the McLaren and Fibonacci numerical series. He encouraged me to read mathematics for fun. I began to understand some of the mathematical theories that I had not understood while at school. He was a man who could genuinely share his knowledge at all times.

I remember him giving me a thick manuscript of his to read and review. His narratives were deep and complicated. I remember Hovio neHohwa.

Sam was a vegetarian who enjoyed African cuisine like muriwo wemubora and well-cooked rape with sadza.

I do not remember him having a hair-cut. He grew his hair and left it in its natural state and that made him look well.  I will always remember the ever glowing smile on his face.

Sam Chimsoro truly left a legacy that will be cherished by all of us who shared space and time, interacting with him at some point in our lives.