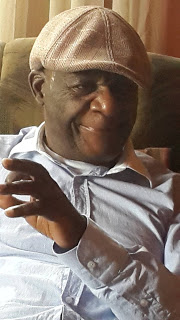 (Mungoshi 70th birthday pic by D. Maruziva)
It is sad that the world renowned Zimbabwean writer, Charles Mungoshi, is no more. He died in the early hours of the day today, 16 February 2019 at a hospital in Harare. Although he had been unwell for the past few years, there was hope that he would make it back to his writing desk. It was not to be.

At his 70th birthday on the 2nd December 2017, Mungoshi listened intently as we spoke about the day to day challenges and quipped: Kana rwizi rwakazara musaruedze negumbo. Siyai rwakadaro.  Rwuchaserera. (If a river is in flood, don’t dare cross. Wait until it subsides.)  That was quite a mouthful and very characteristic of him too to produce lines with subterranean meanings. In 2006 he wrote a short note: Put the lead on the handle but don’t let the handle rot in your hand.

Charles Mungoshi handled a broad range of literary genres and styles in a way that is very rarely surpassed by many in the so called Third World today. His literary profile is compact.  He was a novelist, poet, short-story writer, playwright, film scriptwriter, actor, editor, translator, and consultant.

Mungoshi wrote convincingly and continuously in both Shona and English where many of his compatriots tended to write in English or Shona or Ndebele only. In 1975 alone, for instance, Mungoshi published two books: Waiting for the Rain (a novel in English) and Ndiko Kupindana Kwemazuva (a novel in Shona). These two works exude separate amazing qualities that one wonders how they could have been written “back to back.”

That ambidexterity was no fluke because later, in 1980, Mungoshi repeated a similar feat, publishing Inongova Njakenjake (a play in Shona) and Some Kinds of Wounds (a short-story collection in English.)  It is as if Mungoshi writes simultaneously with two pens - one in the left hand and the other- in the right hand!

In fact and as shown below, between 1970 and 2000, a period of 30 years, Mungoshi made an average of one major publication in every one and half years and won a prize of sorts for each of them.

13. Certificate of Honor Award of the 30th anniversary of Zimbabwe International Book Fair for dedicated service (2013).

Maybe the greatest strength of Mungoshi literature is the life-like feel he has for people.  He has sympathy for the under-dog, without over-writing. His characters belong to believable circumstances, place and time and are endearing. He says about writing parts of Waiting for the Rain: “I was living in it (the story didn’t happen in the past. It is a drum. It is happening, it is playing now.”
Mungoshi’s works have been translated to numerous non-European languages; Waiting for the Rain from English: to Hungarian (1978), to Norwegian (1980) and to Russian (1983) second, Coming of the Dry Season from English: to Russian (1985) Third, The Setting Sun and the Rolling World, from English: to Japanese (1995) Stories from a Shona Childhood from English: to Swiss (1996), to German (1988), Walking Still from English: to Swiss (2006).

Born to a rural farming community in Chivhu on 2 December 1947, Mungoshi has very humble origins and has remained down to earth despite his international stature. Until the time he fell ill recently, he had travelled across Zimbabwe, mentoring young and new writers, sometimes for no fee. Records at the Budding Writers Association of Zimbabwe and the Zimbabwe Women Writers association can bear testimony. He has mentored  or directly influenced  younger writers, among them Ignatius Mabasa, Ruzvidzo Mupfudza, Albert Nyathi, Joice Mutiti, Lawrence Hoba, Chiedza Musengezi, Thabisani Ndlovu, myself and others.  His style of writing has become a brand.  In honor of his amazing ambidexterity and depth, the University of Zimbabwe – conferred an honorary doctorate degree (Doctor of Letters-DLitt) on him on Friday 14 November 2003.
The essence of Mungoshi literature is about grappling with the issues of home, identity and belonging in the changing times. He is constantly asking key questions: Do we truly belong to this land? Is it possible to belong here and elsewhere? What must we change and what exactly must continue and why? Is there any space for the individual in our quest for collective glory? Are we right? Are we wrong? In this quest Mungoshi pens “The Accident” a short story from Coming of the Dry Season which seems to question and challenge the stance of a people living under minority rules – the book landed him in trouble and is banned in Rhodesia only to re-appear later and has been studied in schools ever since. Mungoshi’s writings have also tended to evoke that strong sense of Zimbabweaness. We shall sorely miss him. NB: for all funeral arrangements, talk to family spokesperson Tendai Madondo at +263 783837098
+By Memory Chirere, Harare