The return of Andrew Chatora...Harare Voices and Beyond 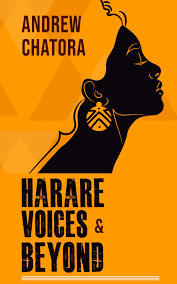 The UK based Zimbabwean author, Andrew Chatora, has yet another new novel on the way! This is the third novel in three years from the fast rising writer from Mutare. It is called Harare Voices and Beyond.

This story is based on the troubled lives of a white commercial farming family who dramatically lose both their very active father and their farm in Mazowe to jambanja. The term jambanja is Shona for fast and sometimes dramatic activity. Jambanja became the other term for the recent occupations of white farms in Zimbabwe.

After such a loss, the Williams drift reluctantly to their house in a posh northern suburb of  Harare but soon inactivity and poverty set in. The two white boys; Rhys and Julian Williams start to drift away physically and mentally. They go south of Robert Mugabe Way, into the traditionally poor black territory of Harare in search of survival, beer, dangerous drugs, easy sex and other things. Meanwhile, their mother, Doris, becomes a sitting duck. She floats mentally and the sudden fall of fortunes leaves her close to being an invalid.

The boys are gradually 'going native' as they become involved in spaces and activities not usually associated with the well-heeled white masters of Zimbabwe since occupation. They are newcomers to a world of lack that they had only watched from a safe distance. There is always a price to pay when one falls from privilege. In colonial discourse, the term “going native” means the white man is becoming one with the 'savages' or the natives, to the extent of eating what they eat and eventually feeling as they do…

When the worst comes, this family is caught up in a wave of loud misunderstandings amongst themselves and in the subsequent melee, the mother and one of the boys allegedly kill the younger of the boys by accident and in fear, they secretly bury his body in their home, until it is eventually discovered.

This is, to my knowledge, the first fully fledged novel by a black Zimbabwean writer to look at the setbacks suffered by white folk during the Zimbabwe land reform. Andrew Chatora searches delicately for the place and scope of the white community in post independent Zimbabwe.  Being a pathfinder of sorts, many may find this novel either unsettling or satisfying, or both.

Many critical questions shall be asked. How do you write white people effectively when you are a black writer from Zimbabwe? Would that tantamount to speaking on behalf of the enemy? Would you be able to show that their loss is as a result of complex events within and beyond Zimbabwe? The author’s real test was in tactically navigating this very contentious terrain.

Chatora has chosen a subject that is emotive and well followed across the world; the land reform of Zimbabwe. Was the reform right? Was the land reform necessary? Was the process, right? Was Mugabe right? Should Mugabe be bashed all the way for leading this land reform? What should the white people have done to come out unscathed? Have we ever seen a reform of a similar scale in all post independent Africa? How does jambanja echo the earlier process of white occupation of black land a century earlier?

But Harare Voices and Beyond does not disappoint.

The fast track land reform phase brought Zimbabwe into the international media, arguably much more than the liberation struggle for Zimbabwe itself. In a widely circulated website interview with Nordiska Afrikainstitutet of (February 2004), Zimbabwean writer and literary scholar, Robert Muponde, argues that ‘Land is the text of Zimbabwean History and Literature.’ He is referring to the centrality of Land in the earlier seminal Zimbabwean literature texts set in Rhodesia. Some of them are Waiting for The Rain, Dew in the Morning and Without a Name. In all these novels, land is either an issue in the background or is a side show with varying degrees of prominence.

As I come to the end of Chatora’s novel, I recall that Robert Muponde adds: “…the writer who a year ago was urging the politician to seize land, even factories and shops belonging to white people (as suggested in Mujajati's Victory of 1993), in the name of the people, now finds that the politician has not only outdone the writer in shouting the presence of inequalities in society. The politician has gone further. He has left the writer with two stark choices: the writer must endorse the politician's and war veteran's actions because that is what he (the writer) was urging in his poems (in the case of musicians, in their songs), or he must condemn the actions as reckless, etc.”

As I think about that, I realise that perhaps, a big take away from this novel is the author’s ability (which may surprise Muponde) to skillfully showcase and dramatize to the reader that the land reform in Zimbabwe has its sharp and irreconcilable contradictions. There are many versions of the land reform story of Zimbabwe, depending on who is telling which part of the broad story, where... and who is listening!

In many ways this is a detective story narrated through Rhys and Marina, two prisoners at the Chikurubi Prison as they recount their personal life stories which have brought them to their present realities. They are a crucial link to the mafia style underworld of Harare. In the dead of the night, Harare crawls with the least expected liaisons between the rich and the poor, black and white and at every corner, there is a surprise meeting between rivals. In this space you meet perverts, street people, hard core criminals, politicians, preachers, drug pushers...

Chatora is now a master at delicate subjects. In his first novel, he shows us the trials and tribulations of a determined black teacher from Zimbabwe who tries to teach English to white children in England. His second novel is about a native who leaves the periphery (Harare) for the centre (England) due to economic reasons, but later returns to the periphery (Harare) and returns to London once more!

Harare Voices and Beyond is published by Chicago based Kharis Publishing – an imprint of Kharis Media LLC and is released on 1st February 2023. Copies will shortly available to order in digital, paperback and hardback format from Amazon, Barnes and Noble, Books a Million, Walmart, Target Christian books and other online book retailers.

The book adds on to Andrew Chatora’s growing stable of contemporary fiction/migrant literature as it is a welcome addition to his cannon, two other books: Diaspora Dreams and Where the Heart Is are also published by Kharis Publishing and available from  Amazon.

Posted by kwaChirere at 6:51 AM