“I am right handed but left footed” : BRIAN CHIKWAVA 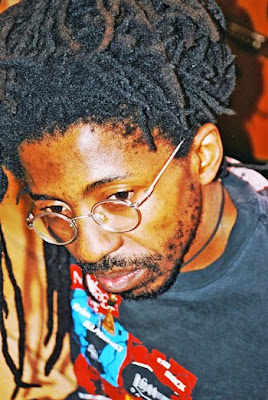 The weaverpress website describes Chikwava’s debut novel: Fearlessly political, laugh-out-aloud funny and with an anti-hero whose voice is impossible to forget… When he lands in ‘Harare North’, our unnamed protagonist carries with him nothing but a cardboard suitcase full of memories and a desire to find his childhood friend, Shingi. In this astonishing debut novel, Caine Prize winner Brian Chikwava tackles head-on the realities of life as an asylum-seeker. This is the story of a stranger in a strange land – one of the thousands of illegal Zimbabwean immigrants seeking a better life in England. But our narrator has a past he is determined to hide. From the first line the language fizzes with energy, humour and not a little menace.

Below is the interview that I did with him. I really wanted to take him to the basics and find out what makes him tick.

Memory Chirere: At the Oxford Harare North launch in May 2009, I asked you from the audience, “What do you anticipate to be the kind of response to your book back in Harare?” You said, “Laughter.” Now, Harare has responded and you have won a NAMA award. Congratulations. I was in the audience during NAMA and there was a huge applause as somebody received the prize on your behalf. I didn’t know you had so many fans and readers in Harare. Any special messages?

Brian Chikwava: Was very pleasantly surprised and must thank the National Arts Council of Zimbabwe for the good work they are doing. Such surprises make writing a bit more bearable.

MC: To the reading public, you first appeared with the short story ‘Seventh Street alchemy’, in Writing Still, 2003. There is no trail of you before that. How were you made?

BC: I started off trying my hand not at fiction but visual art reviews. That was after I joined the short-lived Zimbabwe Art Critics Association. After learning how to write a review, I thought I may as well try the short story and poetry. I had to ditch poetry quickly because I feel shockingly well off what was acceptable.

MC: It is also reported that you were ‘once a member of the now defunct Zimbabwe association of Art Critics’. What was all that about?

BC: The Zimbabwe Art Critics Association had the noble hope of getting more art enthusiasts to engage with art. Those who felt moved to try their hand at art reviews were given a guiding hand and sometimes with the help of Barbara Murray, then editor of Gallery Delta Magazine, ended up with their work in the Herald or the Daily News.

MC: It is said that you collaborated with some of Harare’s upcoming Jazz musicians then. Who are these musicians and what instrument do you play?

BC: Oh yes, we did mess about trying overly ambitious experiments that we had to abandon in exhaustion. A number of the experimentally inclined people who are now scattered across the globe leapt in; the likes of ex-Luck Street Blues Pascal Makonese; Noble Mashawa, briefly of Andy Brown’s Storm; the long-suffering Luka Mukavele who kindly gave us use of his recording studio, and his Mozambiquean compatriot, drummer Suleiman Saide.

MC: You recorded and released Jacaranda Sketches. What is this about?

BC: I sometimes think it was only a platform for trying out new things in the then new London environment. But for a number of reasons, I’m increasingly terrified of even listening to it now since it demonstrates to me how capricious good judgment can be – one year you think you have, and the next you are shocked by the choices you made.

MC: You are a Science major, writer and musician. Is this a mixed quest? Are you ambidextrous?

BC: Unfortunately not. But I am right handed but left footed.

MC: So far I have seen all your stories in group anthologies: Seventh Street Alchemy, Zesa Moto Muzhinji, Fiction, Dancing To The Jazz and His Goblin Rhythm (my favourite) and others. What is your relationship with the short story form and should we expect an anthology?

BC: I’ve been thinking about an anthology but somehow feel terrified of making a start. That’s because I find stories a bit of a tight rope walk. Hopefully I will rediscover the courage.


MC: Harare North, your debut novel has been applauded for ‘experimenting with language’. Ikhide Ikheloa says you use ‘pretend-language’, back in Harare, Irene Staunton says you use ‘patios’. My students wonder what you wanted to achieve because “Zimbabweans are well known for their ability to speak English.” In what circumstances did you decide to abandon the standard English language you used in the short stories?

BC: I tried standard English and it just didn’t work. The manuscript read stilted and the character had inhabit. That’s when I thought of – is it Achebe, I can’t remember? – who talks about bending the English language in order to make it carry the weight of the African experience. The language that I use in Harare North is not a true language in the sense that it is not spoken on the streets of Zimbabwe, but I believe it expresses the Zimbabwean sensibility better than standard English.

MC: Harare North has been referred to as being ‘fearlessly political’ and for being laugh-out-loud funny’. What did it take to maintain the various balances that one finds in this novel?

BC: I think you can properly inhabit a character, a lot of things fall into place and you cast aside the eye that constantly makes judgments and concentrate on only making it a decent piece of art.

MC: This might be too personal, but at how many points, if any, does your path and that of your main character come together?

BC: No, not at all. The story genuinely crystallized after I met an ex-Lord’s Resistance Army guy on the street. We had a chat and he told me how he missed his past life, how he missed holding his AK47. At first I thought it was all a joke but quickly realized he was serious. More than anything I was struck by his stance, knowing how un-pc it is to confess to loving the LRA. So I though, well, why not create a Green Bomber who comes to London and is just as unyielding in his beliefs.

MC: In Harare North the characters go through stubborn pride and ironically, shame and self loathing too. Is this the psychology of exile?

BC: In the right dose, stubborn pride is good if one is an exile, I think. But what I also did not want to do is to fall into representing Africans in exile as objects of pity, which they commonly are in the media. As for self-loathing, I guess that can be the price one pays for a rigid approach to life.

MC: Again the students wondered whether you are saying home is better than exile in spite of the sociopolitical and economic challenges in Zimbabwe? In Harare North, the diasporans are clearly marooned. The kusina amai hakuendwe (foreign land is hostile) message is very clear but the dzoka uyamwe (home is best) message is missing.

BC: Yes, that message is missing because I could not do that without being didactic. But I also think that the question of home vs exile is complex and requires a nuanced approach.

MC: What have you learnt from doing and reading Harare North yourself?

BC: I’ve probably been demoralised to realize how much I’ll have to do before I can write a book that is anywhere near perfect.

MC: What should we expect from you soon?