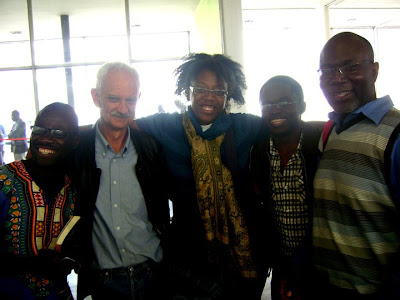 On its meeting of 5 December, 2011, The General Council of ZIBFA received, discussed and adopted as the theme AFRICAN LITERATURE IN THE GLOBAL AND DIGITAL ERA as recommended by The Executive Board after which the Board discussed several topics suggested by its members as well outside individuals who were considered to be specialists in this subject. These topics form part of our “Call for Papers” for The Zimbabwe International Book Fair Indaba.
As you are aware, the weeklong event consists of the main Indaba, Young Persons Indaba, Writers’ Workshop, The ZIBF Exhibition, Live Literature Centre and the reintroduced Traders’ Day. After reviewing the last Book Fair and noting trends, general comments and recommendations from participants, the Board came up with the following dates for each event:

We are anticipating an improved and significant interest in the Indaba from both presenters and participants and, therefore, have tentatively given it three days. This is not yet official as it depends on the extent of interest we get from presenters and, not the least, funding. However, should we encounter any challenges with the three days, we are flexible enough to revert to the two days as in the last event. Similarly, because we also foresee greater enthusiasm from exhibitors, we have extended the exhibition to three days, before which we have left room for Traders’ Day.

Please, note that although we cannot shift the dates of the ZIBF 2012 WEEK, the dates for the programs remain tentative for the time being, as we are leaving room for contrary suggestions. We expect stakeholders to point out any conflict in the dates well in advance but if we do not hear from them by 28 February 2012, we shall consider that these dates are favourable to all.

We call for presentations that dwell particularly on the comparative experiences of African societies, writing, publishing and copyright.

• We believe the theme for 2012 has a great potential to make the Book Fair relevant to the needs of stakeholders of the book industry in Zimbabwe and Africa namely, publishers, writers, booksellers, librarians, Aripo and Zimcopy, educationists, government and students.

• The ZIBF Indaba 2012 theme provides a platform for critiquing and analysing the constellation of forces impacting on African Literature in the contemporary Digital Era.

• The theme also calls for participants to look into African literary creativity at a time when neoliberal regimes continue to threaten humanities knowledge production about Africa and people of African descent through the world’s fast globalising economies and international relations.

• These forces notwithstanding, it is anticipated that the participants’ responses take in their stride the resilience, impact and influence of the African creative genius on the world global stage.

We look forward to significant excitement and participation from Zimbabwean and African writers and publishers at home and abroad as they take stock of recent developments in information technology and how they have impacted/will impact positively and negatively on the sector in Africa. As usual, African and non-African scholars, writers and publishers outside these groups shall be warmly welcomed to participate according to their respective capacities.
We, therefore, now invite submissions of abstracts from writers and critics, publishers and distributors, and all others who are interested in African Literature.

KEY AREAS OF PRESENTATION
The Conference organisers call upon intending participants to submit abstracts that address – but are not limited to – the following themes:

Abstracts of not more than 300 words and enquiries will be received at the following email addresses: execdir@zibfa.org.zw and: events@zibfa.org.zw up to 31 March 2012 for reviewing by the ZIBF Indaba organizers and will be reviewed anonymously. Selected participants will be notified by 30 April 2012 for development of their full conference papers. Papers should be submitted at the above e-mail addresses by 30 June 2012.

+Inserted on 9 February 2012 by Musaemura Zimunya,
Chairperson ZIBFA Executive Board
Posted by kwaChirere at 8:01 AM