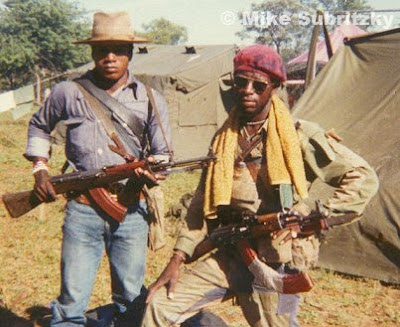 Poet and Revolutionary. That phrase sounds very romantic and has a tinge of the make-believe. However, those familiar with the history of the armed struggle in Mozambique and Angola are used to “Poets and revolutionaries.” For example, Mozambique’s current president, Armando Guebuza is a poet of remarkable talent.

While the most outstanding art form during the 70's struggle for Zimbabwe’s independence was song, for Mozambique and Angola, there was both poem and song. Reading and studying some of the existing Armando Guebuza’s poetry takes one deeper into the meaning of struggle for Mozambican independence. Guebuza’s poetry is the quintessence of a genre that has grown to be known in African literature as “war poetry.” This is the kind of poetry written and read by nationalists and fighters in Portuguese speaking African territories, especially Mozambique and Angola.

Coming from countries with traditions of slavery, colonial and company forced labour and assimilation and its dismal lies, Angolan and Mozambican revolutionary poets reflect on the plight of a people who were forced to find a rallying point in order to struggle for self-rule.

The poems of Armando Guebuza seek an African identity defined by common suffering. His most well known poem is called “If You Ask Me Who I Am”:

“Fight” is a key word in such poems from Mozambique and Angola. Some of these poets grew up in the revolution. Guebuza himself joined the struggle at the tender age of twenty in 1963. He hails form Mozambique’s northern province of Nampula, specifically from Murrupula. He got military training in Tanzania under FRELIMO(Mozambique Liberation Front) He got involved in active guerilla fighting, became a commander and rose to the rank of General. Before becoming President in 2005, he had served the ruling FRELIMO government in various capacities.

The kind of consciousness that springs from collective suffering under the heavy boot of Portuguese imperialism is also evident in the poems of the father of the Angolan war of liberation, Agostinho Neto. Aware that no one else would fight on behalf of the oppressed Angolan black race but themselves, Neto joined the war. He scribbled somewhere; a sad but hopeful farewell poem/song:

“My mother (all black mothers)
Whose sons have gone
You taught me to wait and hope…
But life
Killed in me the mystic hope
I do not wait now
I am he who is awaited.”

The poem further bites into raw flesh and gets down to capture the black white divide in colonial Angola:

“Today
We are naked children in bush villages
School less children – playing with a ball of rags
In the sands at noon.
We ourselves
Contract workers burning live
In coffee plantations
Ignorant black men
Who must respect the white man
And fear the rich…
Your children
Hungry
Thirsty
Ashamed to call you mother.”

The story of Agostinho Neto is almost synonymous with the story of the MPLA (Popular Movement for the Liberation of Angola) which championed the struggle for Angolan independence and is the ruling party since 1976. Neto, a qualified medical doctor himself was in and out of prison in the 1960s for his political views and activities. His poems which were “smuggled out of prisons and are the best known of all Angolan poetry.” They are also said to “form the basis of many popular songs” sang during the struggle for Angolan independence. They have been translated into many languages including English, Chinese, French, Italian, Romanian, Russian, Serbo-Croat, Spanish and Vietnamese!

Like Armando Guebuza’s poems, Neto’s tend to be very simple, passionate, leftist and full of sweet pain. This way, they do not fail to touch the hearts and souls of all colonized and oppressed people. Neto’s poems have a practical appeal. Sometimes they enact the rhythm of soldiers on the march and yet they carry an internal protest:

In addition, “war poetry” of Angola and Mozambique can yearn for seemingly simple items, wishes and desires. In such wishes are genuine desires to return to the ‘African source’ symbolized by drums, bracelets, dances, rivers, sex… images that make the world before colonialism enviable and sorely missed. Jose Craveirinha of FRELIMO, for instance, has one such poem called “I want To Be A Drum.” The persona here wishes he were just, of all the things, an African drum!

Craveirinha gave all he had to the struggle. He began as a journalist but got heavily tortured for supporting the struggle in 1966. His poems make suffering a game and crying just another form of music. Yet in this poem he gives voice to the suffering black people everywhere and everytime. Guebuza must have taken a leaf from Craveirinha, especially the ability to laugh at pain or laugh when one should be crying. In a poem called “Those Strange Times,” Guebuza writes:

“Those strange times
When the whip hissed
and tore
a man’s living flesh
rising a cry of rage…
It is a time of revolt
against the whip
This is the time of armed struggle.”

Indeed the struggle became the school for Guebuza and the radical in him was bathed, towelled and dried. And yet for these Marxist Leftist poets of Angola and Mozambique, death did not kill. Death only “sowed the seed” of revolution. Josina Machel, the first wife of Samora Machel, a distinguished guerilla and “an exemplary educationist and a high quality cadre…” was to write in “This Is The Time”:

“The blood shed by our heroes
make us sad but resolute.
It is the price of our freedom
We keep them close in our hearts…
revolutionary generations
are already being born.”

Josina died of natural causes in 1971 at the age of twenty-five. On her death, Samora Machel, who was a private kind of poet, wrote a poem entitled “Josina, You Are Not Dead.” Selected lines from Samora’s poem read:

“Josina, you are not dead
because we have assumed
your responsibilities…
Out of your memory
I will fashion a hoe to turn the sad
enriched by your sacrifice
and new fruits will grow.”

Husband and wife refused to accept death. Samora Machel the poet was the first President of Mozambique. He was born in 1933 at Chilembene in Mozambique’s Gaza province in the South. A peasant by birth and a nurse by profession, Samora Machel joined FRELIMO in 1963, got military training in Algeria, became FRELIMO commander-in-chief in 1968 and was subsequently elected to succeed Mondlane who was assassinated on February 3 1969 in Dar es Salaam. To some people Samora was “a solitary man of action and of very few words” who scribbled a few poems in the middle of the night for Mozambique Revolution, FRELIMO’S official organ/journal.
And this journal was edited by non other than Jorge Rebelo.

As secretary for information, Rebelo will be remembered for his poem called “Poem.” A work of genius, “Poem” is important for arguing why and how revolutionary poetry should be simple and useful. Jorge Rebelo said he would “forge simple words” that “even children can understand and:

“Words which will enter every house
like the wind
and fall like red-hot embers
on our people’s souls.
For in our land
bullets are beginning to flower.”

Rebelo was responding to why his and others poetry seemed simple and rather pointed. It is the war itself that gave birth to such a literary tradition. Written on the move or at the spur of the moment and between battles, there was here the pressure to record a thought, a philosophy… about the struggle. Yet the seeming simplicity and innocence of Rebelo’s poems were the diamond-hardness of this poet’s vision.

The war poem was related to other art forms like song, dance and the slogan. The sense of community in these poems is such that they generally address the immediate people; a friend, mother, father, a lover and you and me. The poems tend to be about a familiar voice talking to familiar people about familiar issues.

The leadership of Neto (MPLA) and Mondlane (FRELIMO), rich intellectuals, promoted a culture of poetry. And for us today, this raises the issue of the role of intellectualism in both the struggle for independence and development of Africa. Due to his training, the intellectual, if he or she is conscious and decides to be useful, can help in the definition of ideals. He or she should unbundled the grand dreams and make them accessible to the ordinary cadres.

The songs and poems of liberation have a terrible beauty in that they dash the barriers between high and popular culture. Listening to such pieces, one imagines whole communities moving together and the difficult questions of principle answered and problematised.

It is sad that these poems are not readily accessible to other Africans in the non Portuguese speaking territories. Besides, much meaning and rhythm has been lost during the process of translation. Even more frightening is the suggestion that many more war poems got destroyed or abandoned at the war-front or are dying in the yellow diaries of fallen heroes.

One also hopes that Guebuza’s rule is going to be marked by the useful simplicity of his poems and the clarity of his artistic vision. Mozambique has been blessed with a reflective and highly imaginative leader.
+By Memory Chirere
Posted by kwaChirere at 12:38 AM