The 'Adventures' of Shimmer Chinodya 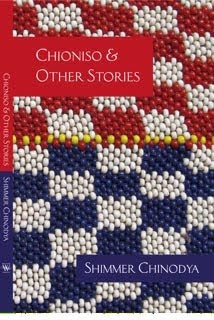 Shimmer Chinodya’s latest offering, Chioniso and Other Stories is a work of a mature craftsman. These stories are just unpredictable and at every turn, you learn more about your dark and secret whims than the stories themselves. And that makes good reading.

For instance, in ‘Why Not?’ you expect Godfrey to go on a reckless sex spree during what first appears like a one night stand in Swaziland. He comes out of it even purer than a new born baby.

Godfrey wakes up in the bed of his newly found girl, unscathed and innocent. The author leads you all the way by the nose until you discover, rather too late, that Godfrey is not looking for anything beyond clean good woman’s company! There is also lots of blood in the end but it is neither Godfrey’s nor from his newly found good Samaritan friend. The young woman is looking for what Godfrey is looking for, without having to go on the roof tops to shout about it! This story will floor you and this is one rare moment that you feel darker and dirtier than a character in a book!

This book will teach all the over killing budding writers out there to tuck in the corners of their stories and allow the characters to play out naturally. It is not always the sound of gunfire or overheated romance that make a story endearing. Even the unsuspecting reader will take out his pen, underline a sentence, tick out a detail and flip-flop to cross check some detail. This is going to be work, play, pay, work, play, pay...

'The Car' could be the most intriguing story in this collection. A son-in-law in South Africa sends a second hand car to a middle aged teaching couple as part of their daughter’s lobola.

Such a gift shakes the old marriage to its foundation.

The man is not quite impressed because it means, as his wife suggests, that regardless of his advanced age, he must go for a provisional licence in order to be able to learn to drive the car. He is also deeply ashamed that his first car is actually bought for him by another man. At the slightest provocation, he says to his wife: ‘A proper son-in-law pays proper lobola and doesn’t try to evade with his with flimsy second hand gifts.’

The wife answers: ‘This car is a flimsy present then, is it? How come in all your thirty solid years of teaching you haven’t been able to buy yourself even a flimsy bicycle?’

Meanwhile the woman loves the gift from abroad. It raises her profile amongst the school staff. She wishes there was a garage or a precast wall to protect the car during the night. She thinks they must hire a night-guard or get an alarm and an immobiliser fixed onto the car. Then she unashamedly suggests that her husband fetch a blanket and sleep in the car so that he makes noises if car thieves come by!

And the husband retorts: ‘Me? Never. I have a bedroom and a proper house at that…’ She goes to sleep in the car herself leaving the man to roll on their old bed all by himself. And eventually the wife drives to work alone and the husband follows to the same destination on foot. And ‘one morning they find the car stripped, all the wheels, lower arms, brakes and cv joints had gone and the Golf sat on four stacks of bricks…’

This collection can as well be subtitled: 'The Adventures of Godfrey' because he appears more often. While his family goes through turmoil, his artistic spirit is indefatigable. He writes on, he travels abroad for writing seminars and retreats and gets to notice that the world is fast spreading out to embrace him when his wife falls into rabid Pentecostalism. Although he thinks that he is losing his roguish daughter, Chioniso, he does not notice that she is a chip off the block.

These ten short stories take Chinodya further than his Can We Talk and Other Stories of 2001 in that they betray a more intricate use of the twist in the tale. One fondly remembers Rob Hopcott views on this matter: 'It is not a question of the reader being wrong, it is rather that a natural belief based on the reader’s prejudices and reader’s conventional wisdom have led to one point of view which then needs to be revised substantially to an altered viewpoint at the end of the story.'
++ Reviewed by Memory Chirere
Posted by kwaChirere at 9:42 AM