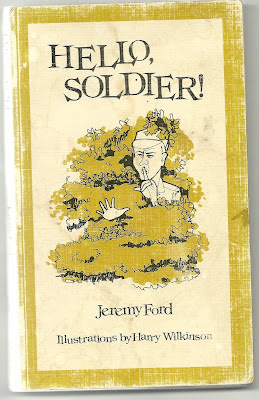 It was Stanley Nyamfukudza who argued in 1993 that, it was becoming clear that those who study Zimbabwe’s 1970’s war literature risk narrowing down to pro-guerrilla literature only – something to that effect. The grave danger was to deny oneself opportunity to get to know how the ‘man in the opposite camp’ viewed the same war, Nyamfukudza continued. He was reviewing former Rhodesian soldier Angus Shaw’s war novel, Kandaya: Another time, Another Place.

Jeremy Ford’s 1975 book of informative poems called Hello Soldier! is not a book you may consider going through when you come across it. It is a ‘hastily’ put together and illustrated ‘book of sketches and poems of a Rhodesian soldier’s life’ published by Graham Publishing in Salisbury. But when you realise that this could be one of the small but useful windows into the Rhodesian Front call up, you read it for pointers and insights. The book is a thin trail in and out of ‘the bush.’

Carrying fifty-seven poems, Hello Soldier! is passionately dedicated ‘To my wife, Florence.’ It is a Rhodesian soldier’s diary in poetry form. Able-bodied Rhodesians went to ‘Call-Up.’ Meaning that they were obliged to train and serve in the Rhodesian army for specific periods during the 1970’s war which they often refer to as the ‘bush war.’ The African nationalists refer to the same as ‘the war of liberation.’

In the title poem ‘Call-up’ the persona who is out on call up addresses a girlfriend back home. His reason for going to war is rather understated:

“Think of all the love we had,
Girl, sometimes think of me,
Now I’m just a soldier in
A war to keep us free.”

Free from what, you ask. The answer: free from Communism! You read on and that very contentious issue is given a soft touch in the poem:

“Girl, I am just a soldier with
A rifle and a pack,
Girl, you got to keep your heart
For me when I get back!”

To the initiated, Ford’s work lends itself to comparing and contrasting with the black nationalist guerrilla poetry by the likes of Freedom Nyamubaya and Thomas Bvuma where the war is actually “the real poetry” and the bush and struggle are “that open university.” This is a case of one war and two contrasting worlds.

For Jeremy Ford’s persona, call up is portrayed as duty, something you can go in and out of. It is a rite of passage and an initiation into manhood. It is no further than a physical experience. In ‘Fit Enough’ the doctor insists on the mere physicality of the venture and from the point of view of that poem, the war is not associated with clear-cut ideals:

“The Doctor says I’m fit enough,
They say he ought to know-
Two feet, two hands, a steady gaze
To carry on for days.”

If you are looking for the Rhodesian soldier’s ideals in this anthology beyond ‘keeping us free,’ you are bound to be disappointed. The poems are about ‘training’ only as an external experience. However, the sense of thrill such poems could instil in a boy-reader cannot be over-emphasised. As mobilise genre; this book must have been very useful to the Rhodesian cause. It is a book that can drive any boy to the barrack. There is here a lot of ‘wheeling,’ ‘marching,’ ‘muttering’ in these poems and at the end of the day; there is always ‘time to eat.’ The sense of picnic in the Call-Up barrack is portrayed as over-powering:

“Now Army food is not too bad
When you’ve been out all day,
For then you eat what they dish out
In lumps upon your tray.
The weight of it is quite enough
To keep a man content,
It weighs him down like many tons
Of healthy grey cement.”

There is a mixture of both the Spartan and ‘soft’ adventure. The comfort strikes a direct opposite with the hunger and disease of the ZANLA and ZIPRA camps in Mozambique and Zambia, respectively. One senses that the ‘Rhodesian war’ depended on a regular fat bill. The illustrations to this collection (by Harry Wilkingson) show young white soldiers in pretty tunic, fitting caps, barrack beds, well oiled guns and the occasional acoustic guitar.

Interestingly, there was time to write letters to ‘Dad, mum, Pete and Joe back home.’ Mum and Dad could even come visit. There was time to listen to radio Jacaranda’s ‘Favourites in the Forces,’ a programme on which girl-friends would phone in or write to tell Jack to ‘give the terrs a hard-time.’ Or one could phone in to pass ‘all my love to Frikkie du Toit – somewhere in the bush.’

One’s duty in this war was ‘timed’ and one marked the passing day on the barrack calendar. You ‘did your bit’ and went back home or to college a true patriot. This was a leisure trip and when it ended, one turned one’s back and moved on. One thought that one was only ‘a rifleman’ who received money on pay-day:

“Pay checked and found correct sir!
Is what they make you say,
And that’s enough to last you till
It comes to next pay day”

But then, throughout, you don’t find a black face in this one hundred and twenty three paged book of poems! But one knows that the cooks and care-takers in these white barracks were black. The black characters have been very unskilfully erased from the whole picture. This is however part of the well known Rhodesian lie or myth – that the black man is not worth seeing. This is not only evident in Rhodesian literature. It is also the same case in Rhodesian paintings. In 1995 Tim McLoughlin was to write: “This point becomes clearer if we compare landscapes (paintings) by white painters like Alice Balfour and others who are fascinated by the vast unpeopled spaces which they see (and not people). Much attention, particularly in water colour painting, goes into the brush-work details of long winter grass or aloes… (and not
people), contorted shapes of branches…” 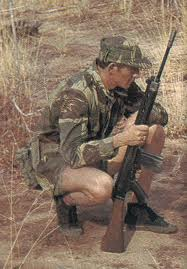 There is, in Jeremy Ford’s poems here an excitement and confidence with the self. The none-but-ourself syndrome. And even after the training, the young soldier persona is not portrayed as properly defining his (guerrilla) enemy. At best the man on the other side is a monkey:

“We’re leaving in a week or so
To go and earn our keep
Away there in the valley where
The monkeys lie asleep.”

Towards the end of this amusing book of poems, one comes across the only contact in a poem called ‘Contact.’ You think - now I will ‘see’ the guerrillas. But the guerrillas are not given shape. There is a single guerrilla gun-shot and before the Rhodesians respond, the guerrillas disappear:

“We all skirmished forward
And sank to one knee
As they ran away through
The forest of trees.”

The guerrillas remain simply as ‘they’ and their association with the bush and darkness have been typical portrayal of black characters in white literature as far back as Peter Halket of Mashonaland. Typically, the African guerrillas rush back into the unchristian bush where they belong. The young Christian Rhodesian soldiers remain and continue to preserve their ‘freedom.’ Part of Ian Smith’s U.D.I. document does not mince words:

“We have struck a blow for the preservation of Justice,
Civilization, Christianity and in the spirit of this belief
we have this day assumed our sovereign independence.
God bless you all.”

As Jeremy Ford’s soldiers go deeper and deeper into their country, they get lost in it! They say, ‘We are miles away from nowhere.’ They miss ‘a smoke, a wash, some good hot food and a sleeping tent.’ They are stranded until an army helicopter finds them. The “bush war” remains an adventure until the young soldiers return home.

Although the Rhodesian soldier literature, music and culture have retreated from the public sphere, it is very much alive as some active web-sites continue to receive such poems from Zimbabwe, South-Africa, Canada, Britain, Australia and New-Zealand. Stanley Nyamfukudza was right. There is a way of reading the 1970’s war somewhere, running parallel to the mainstream one and the earlier we allow them to dialogue, we come away more informed.
(By Memory Chirere)
Posted by kwaChirere at 6:13 AM