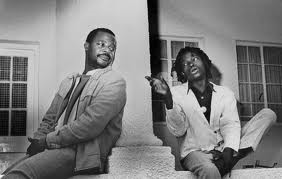 picture: Charles Mungoshi with the late Marechera in the 1980s


Charles Mungoshi, one of Zimbabwe's leading writers, is better known as a prize-winning prose writer for his novels and short-story anthologies. His winning profile is impressive - Honourable Mention, Noma Award (1980, 1984 and 1990); Noma Award, joint winner (1992), Commonwealth Writers' Prize: Africa Region (1988 and 1997).
Charles Mungoshi is, however, less known as a poet, not least because he has published relatively little poetry. In an interview with the German scholar, Flora Veit-Wild (1988: pp. 79-88), Mungoshi admits that writing poetry is, for him, only a 'sideline, a mere finger exercise' in his continuing endeavour to condense language to a spare state of fine precision.

Scholarship on Mungoshi characteristically only mentions The Milkman Doesn't Only Deliver Milk, (Harare: 1981; Harare: 1998) in passing. This single volume of his poems is the least celebrated of all his books. Moreover, Mungoshi has published little other poetry beyond a few poems in magazines and anthologies such as Zimunya and Kadhani's And Now the Poets Speak, (Gweru: 1981).


However, Mungoshi's poetry calls for attention as it is closely related to the essence and philosophy of his more celebrated prose. When properly read, his poetry may be seen as the quintessence of his art - capturing subtly and briefly what he achieves in more elaborate ways in his prose. Using a style that is condensed, routinely detached and sometimes deceptively simple, Mungoshi's poetry paints a multi-layered world of meaning. Almost always, the Mungoshi persona provides a private and contemplative voice, but one that is deeply involved in the movement and multiplicity of the larger world. With the aid of free verse and short, almost hesitant, cascading lines there is here a sense of a persona who sees without being seen and talks without rushing to suggest.


In "Poet" the persona/poet is walking "on the edge of now/like a pole-axed tightrope walker" towards his calling: writing. The mere act of writing poetry (and any writing) is perceived as negotiating a balance between present and past, life and death and the craftsman's task is one of social and personal responsibility. As in the Shona tradition (to which Mungoshi belongs) the artist is a seer of both good and bad; famines or bumper harvests, and the responsibility that accompanies such clairvoyance can be both exciting and unnerving.


But Mungoshi can show nostalgia for the long-past, personal, and rewarding world of rural childhood and innocence. As in "Before the Sun", the persona's forté in the world is to chop "big logs", roast green mealies by a bush fire and when the sun "comes up in the east like some late-comer to a feast", it is seen as the boy's terrestrial playmate. Here man and nature commune and the boy's task, like that of the biblical Adam, is to name the world around him.


If Mungoshi can show nostalgia for an age, and a personal history, which is over: he is never sentimental. In slightly more than a dozen lines, his poems acknowledge the difficulties of "Growing Up." The lines typically fall illusively down the page, scoring the effect of a riddle or a cleverly worded idiom where the meaning always lies just ahead of the reader.


It takes many years
to grow a beard

and many years
to shave it off.

still many more of both
to just leave it alone.


Alternatively, Mungoshi can write elaborate narrative poetry which borders on fiction or folk-tale. "Location miracle" is a 'story' about a disabled girl who gradually rises beyond her physical disadvantages and succeeds - to marry a wholly able-bodied young man. Each hindrance on her way is a challenge to rise higher. "Location miracle" rides on the shoulders of subtle understatement, wry, high-density-suburb humour and common-sense. This story-turned-poem has a fireside aura to it and links easily with other similar poems such as "Little Rich Boy", "Lazy Day", "The Same Lazy Day", "After the Rain". Mungoshi's subtle ability to fracture and condense the short story and tell it effortlessly in verse, though rare in Zimbabwean poetry in English, is common in the Shona working song such as the rapoko, (millet) threshing song that helps to make 'work' 'play' and 'play' 'work'.


Another particular form of Mungoshi's poetry in English is the short, condensed poem. Usually it is based on a seemingly nonsensical object, feeling or observation. This brevity, intensity and relatedness to an object gives the poem the multi-dimensional feel of the far-eastern Haiku or Zen philosophy. In the interview with Flora Veit-Wild (cited above) Mungoshi volunteers his admiration for Matsuo Basho, the Japanese master of Haiku. Loosely defined, Haiku form springs from observing a specific object or dwelling on a specific mood or happening. However, Mungoshi's very short poems also remind us of the later poems of the English poet Thomas Hardy that began with a single object - a lamp post, an old table in an old house, etc. but provoke reflection on the meaning and value of life.


In "Non-Stop Through Enkeldoorn" the persona (obviously in a fast-moving car at night) has a sudden glimpse of unknown people's "silent faces" and "wordless mouths", stepping back into the dark as the car drives past. This brief experience provokes feelings akin to seeing/reading momentary words of a page in a stranger's biography. This refers to the brevity of human life and the frightening anonymity of people one cannot and will not ever relate to. Even more acutely perceived is the poem "In the Wilderness":


The torrid silence of the October sun.
Miles upon miles and miles of burnt-out plains.

Suddenly you realize
you are talking loudly to your
shadow.


This poem is about the moment of walking across a wide plain after the burning of grass and the resultant emptiness. Here, as in most of Mungoshi's very short poems, he captures the spirit of loneliness and the capacity of the perceived object or environment to dictate a specific mood or thought. Other poems in this mould are "How do you do it", "In Flight" and "The Trees".


It is interesting to note that Mungoshi's poetry has been generally perceived as rarely making socio-political statements as in the poems of some of his contemporaries such as Chenjerai Hove, Musa Zimunya, Tafataona Mahoso, and others. This is only an interpretation.

Mungoshi's politics may be implicit rather than explicit, but he does not evade matters political. He rather employs the multi-dimensional idiom that offers space for various interpretations. In "Neighbours", for example Mungoshi's persona warns the neighbour against neglecting a wife's conjugal rights because there are many people around - the milkman included - who might offer her that service at any time. That poem is clearly 'domestic' but its undertones are political. Equally volatile, are the seemingly comical antics of the characters in "After the Rain" but the pointers to universal needs such as space, food, warmth, peace, accommodation, freedom, etc. in the poem are essential to any community.


Another aspect of Mungoshi's poetry is the anguished way he writes of "Home" and alienation in general. The poem "Home" - as with Lucifer in the novel Waiting For The Rain - talks about what it means and feels to live in colonially defined space from which you eventually run away, returning only to die "after having lived your life elsewhere". And yet at another level Mungoshi accepts that that space 'home' is a place where recent history and one's people are situated. As in "If you don't Stay Bitter and Angry for too Long" Mungoshi invites you to return into the home within yourself - that unchanging part of humanity, the conscience.
By Memory Chirere