Stephen Mpofu's 'Creatures At The Top' 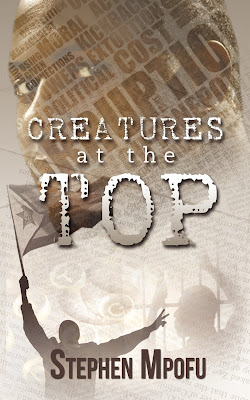 
Stephen Mpofu has done justice to his memories. His new book, Creatures At The Top will speak for Mpofu long after he is gone. His grandchildren and their children’s children will be able to see Rhodesia and newly independent Zimbabwe through his eyes and not through the eyes of Mpofu’s enemies or even that of his friends!


He does not claim that he was right in whatever he did or omitted but he leaves you with a feeling that life is a journey with a twisting path and one’s enemies and friends are just sign posts on that road. What matters is one’s own indefatigable ideals and principles and to know that at least one has them.


Using a pen name, Sam, Stephen Mpofu writes about a black boy from Mberengwa in Rhodesia of the 1960s who embarks on the archetypal journey crossing into Zambia to train as a journalist, only coming back to an independent country after two decades, serving in the media during a critical period and eventually being forced to quit when the heat became too much.


This is a book that takes a cross sectional view of Zambia and Zimbabwe, two nations in transition. The point of view here is that of a humanist nationalist journalist. He wants justice and prosperity and he knows and sometimes is even happy that this may bring him down.


It is a story about exile and consequently about Zambia and its hate-love relationship with exiles and war combatants from across the region. This is a story about; the Copperbelt, Chimwemwe Township, the Northern Star, Sam Nujoma, Kenneth Kaunda, the Times of Zambia, Tererai Gapa, Philemon Ngandu, Vernon Mwaanga William Saidi and others. “In their rather harsh and but well intentioned exhortations, the Zambians however failed to acknowledge the role played by Zimbabweans whose votes had contributed to UNIP’s sweet electoral victory.”


In the new Zambia, Sam had noticed that “there is a tendency among some aides (of the leader) to ingratiate themselves with a leader by telling him only those things that they think will please and pacify the boss. Such aides always want to think for the leader as though he were in that position by default and not on account of a demonstrated capacity to think for his nation and himself.”


His return after nearly twenty years of exile leaves Sam in a dilemma. He had long experienced freedom in Zambia and coming to back to one’s newly independent country was like ‘stepping back in time.’ And seeing people repeating the errors one had seen committed in newly independent Zambia became an excruciating experience.


This is a book about what Stephen Mpofu thinks about the role of journalists in national development. For instance, editors within the public media must be strategic thinkers who provide input towards national problem solving, Stephen argues through Sam. Where editors blindly kow tow pressures from outside the newsroom, their crucial advisory role is compromised and moral decay sets in. For instance, the Zambian scenario had demonstrated to Sam that errant individual ministries may intimidate newsmen not to expose them, claiming that any publicity would be an attack on the government.


In this book Stephen Mpofu does not claim any heroics. He had gone to Zambia in the early 1960’s clearly to seek an education and a good job in a free environment. It never occurred to him to go for military training alongside the many young people who came from troubled Rhodesia. He however never lost touch with the main characters in the liberation movement whom he openly supported in real life and in his writings. In fact, they counted him as one of their own.


In the final analysis, Stephen Mpofu is unique in that despite what he sees as his eventual sidelining in independent Zimbabwe, he does not break ranks with nationalist ethos. He remains positively within the ideals of self rule.


Stephen Mpofu was born in Mberengwa District. He trained at Africa Literature Centre, Zambia in 1963 and lived in exile in the neighbouring country for 17 years. From 1965 to 1980, he worked for The Times in Lusaka where he rose through the ranks to become Assistant Editor.He returned to Zimbabwe to become the first black News Editor of The Herald in 1981.He rose to become Senior Assistant Editor until 1987 when he became Sunday Mail Editor for two years.Mpofu was then moved to the Chronicle in Bulawayo where he headed the paper for 12 years until his retirement in 2001.He taught briefly in the Department of Journalism and Media Studies at the National University of Science and Technology and later left to concentrate on writing his latest book.He remains a writer, as he is a columnist at Chronicle while he is also a member of the Board of Directors at New Ziana. Creature at The Top is his third book after Shadows on the Horizon (1984) and Zambezi Waters run Still, a sociological novel published in 1996.

Posted by kwaChirere at 2:02 AM