Following up on a NAMA award winner 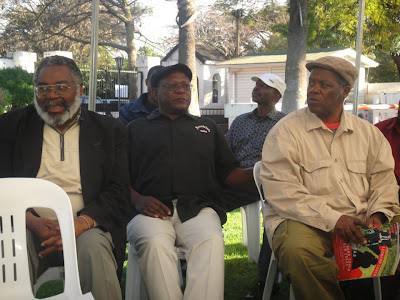 David Mungoshi (extreme right) with fellow writers in Harare.
Some people take awards in the arts for granted. After the ceremony, they do not care about the winner. They do not make a follow up to observe the effects of an award on the artist. kwaChirere followed up on David Mungoshi whose novel; The Fading Sun won Zimbabwe's National Arts Merit Award (NAMA) in the Outstanding Fiction category in 2010, to see what NAMA has done in the real life of an artist.


Published in the UK by Lion Press, The Fading Sun is David Mungoshi’s second novel. A woman in menopause stops in her tracks to take stock of her life. From the leeward side, Mary has more than her fair share of maladies. Mary’s skin is wrinkled. Mary suffers from bouts of migraine and arthritis. Mary has had each of her three deliveries by caesarean section. Mary has lost one of her ovaries early in life. Mary has a thyroid problem which has led to thyroidechtomy. Mary has lost one of her breasts through mastectomy and she wears the breast prosthesis.


David Mungoshi respects NAMA and is happy that he won in 2010. Three years later, he feels that the award reignited his writing career.


kwaChirere: It was three years ago. Now, can you say that winning a NAMA was worth anything at all? Again: congratulations!
David Mungoshi: I never thought I'd hear those words from anyone! The award has made a lot of people other than me very happy: my wife Elizabeth and the children and everyone in the Mungoshi clan. My younger brother in Canada has just ordered a copy of The Fading Sun (TFS) for himself with amazon.com. Man, I am still very happy.

kwaChirere: Mary, the central character in ‘The Fading Sun’ has cancer and other various maladies. What inspired this story? What did you want to get at?

DM: I have always been gender-inspired. I remember writing a pretentious little story many years ago in which I was examining the question of Lobola. Pretentious because I was still just early into my teens and obviously quite green in such matters. Anyway I called the story,’ She’s a Commodity.’ I don’t remember what happened to it. It’s a story of how a woman rises higher than her husband in the party of liberation and how the husband can’t handle that and starts getting physical. In Stains on the Wall, the women are also treated sympathetically. When I wrote The Fading Sun, I was responding to a request from a friend to see if I could write that kind of story. I guess I am trying to show the resilience and versatility of women, how they conquer extraordinary odds because make no mistake, Mary conquers. I guess I am also saying that for people like Mary death can never be a tragedy and it can never vanquish them.

kwaChirere:  With TFS, what type of readership did you have in mind?

DM: I was writing for everybody, to affirm womanhood and show how a woman is the very apotheosis of life itself. I wanted all males to do a bit of introspection as well and perhaps get to discover that there’s more to life than the trappings and the image and upward mobility.

kwaChirere: I suspect that the major talking point with TFS will be on how you as a male writer went for various ‘deep’ women’s experiences. Why did you do it?

DM: As I said before, a friend challenged me. I was a little hesitant to start with and then one day I was talking to Yvonne Vera about just this problem of writing intimately about matters that may not always come naturally to one if you are the opposite gender. I have never forgotten what Yvonne said to me, it was at one of the Book Fairs in Harare, she said the imagination is the freest space and that all things were therefore possible. The rest, as they say, is now history and the deed is done. Will I do it again? Most probably yes. At one of the readings I did from the book quite recently, a lady said to me that there was a lot of passion in the story and in my reading of it. Another said she thought that I liked women and I said yes because I do like women. They are the most beautiful people that I know and I am not just talking about appearance here. So, yes, I shall probably write another story in the mould of TFS. But for now I am just fine-tuning my next offering which I hope will show the depth and variety in my approach to writing.

kwaChirere: Various people who have read the book like chapter seven very much. They say it is episodic, green maize cobs are roasted and the hyena laughs. Any special reasons why you wrote that chapter the way you did?

DM: I think I wanted to try and achieve what one of my lecturers during my undergraduate years called the ‘immediacy of the experience, the intensity of the experience.’ It was quite exciting trying to do what I did in that chapter. I am still wondering whether or not that kind of innovation can carry a whole story. Perhaps we should soon find out soon, in another year or two, after I empty my creative tray of what’s currently in it. I am thinking of writing something along those lines. The theme is there already and I am working on the plot, the way that I always do, in my mind!


kwaChirere: The script that began as TFS, like any other, must have some history. You know that scripts disappear, scripts are abandoned, some scripts are ill fated and some are effortless. What is the peculiar history of this script?

DM: I guess TFS was just a little ill-fated. It was always praised to high heaven but somehow didn’t see the light of day until Sarudzayi Barnes of Lion Press came along. She’s a fantastic person, lots of vision and grit.

kwaChirere: Every artist imagines himself reaching a certain level with his art. Where are you going and how will you get there?

DM: I am looking at the stars, thanks to the NAMA! I want to go out with a bang, at the end of my earthly sojourn. So there will be more perceptive, innovative and engaging writing to come, poetry, short stories, more novels, and the lot! I want to write things that can unsettle people but also make them feel good. Sounds paradoxical doesn’t it? I assure you it can be done.

MC: Which writers influence you?

DM: I remember reading a poem by Tafirenyika Moyana in Parade Magazine in the late 1960s. He called it ‘A God’s Error.’ It was my first real contact with evocative poetry. Moyana’s imagery was just fantastic and his sense of bathos quite unparalleled. He is most probably among my very early influences. Then of course Ernest Hemingway. Charles Mungoshi introduced me to Hemingway. But when it comes to a sense of the epic I still think Milton’s Paradise Lost ranks among the very best. When I read Achebe’s Arrow of God I couldn’t believe what the man had achieved. I wondered if I could do it. Conrad’s ‘Under Western Eyes’ was also a great read for me. Now I am hooked on Kahlil Gibran and I guess I try and do some of his stuff here and there.

kwaChirere: How do you relate as brothers and as writers with Charles Mungoshi?

DM: We relate quite well. We have always been brothers and friends. We began writing at about the same time and were both first published in African Parade in the 1960s. That’s a long time ago! Charles has always believed in my writing despite the fact that for me recognition has taken its own sweet time to come. Our styles and concerns are different and so is our ideology. In my younger days I was avidly leftist. Perhaps I still am deep down but the realities on the ground have perhaps dictated some adjusting without necessarily compromising on any of my progressive stances such as those on gender and collective justice. How would you classify my story, ‘Seventy-Five Bags?’


kwaChirere: What have you learnt from doing TFS?

DM: I think I can say without hesitation that I have learnt the value
of research and empathy. There is no way I could have written a story
like 'The Fading Sun' without these two attributes. The book has also
taught me to be patient and to understand that when its time is due a
work of art will get due recognition. The writer, like the actor, must
be 'in character.'
kwaChirere: If your wishes were granted, which of your fresh scripts would
you publish next and why?

DM: 'Catalogues.' It is a story in which I try to do quite a few things
including the use of magic realism and the grounding of my plot in a
universe that has historicity. So I strive to write so evocatively that the reader who has roasted groundnuts or green maize can experience the delicious smell
and feel the taste in his mouth.
Posted by kwaChirere at 2:02 AM