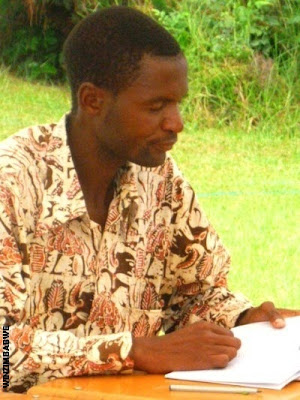 Elias Machemedze reads from his novel Sarawoga at a recent writers meeting in Harare.


Elias Machemedze, author of the novels; Sarawoga and Nherera Zvirange is an unassuming lanky young fellow. However, he has a robust personal story which he tells slowly and carefully. Machemedze’s life story stunned the gathering of writers at the Zimbabwe Writers Association meeting in Harare on Saturday 2 March 2013.


His story is that of a rural based writer of our time who overturns the tables. Before he was through with his O levels, out in rural Shamva of Zimbabwe, he had already begun to work on the script of what was to become the novel, Sarawoga. It was developed from a thin line story narrated to him by his father, Chisango Machemedze.


This is an intriguing ‘old world’ story about Chief Nyasoro who raises a step son, Sarawoga. In his youth, the cunning Sarawoga, tries in various ways to usurp Nyasoro’s throne with the help of the newly arrived white settlers. His appetite for power can only be equated with evil. As a result, the spirits of the land of Chipindura intervene and Sarawoga is killed mysteriously. Done in impeccable Shona language with no lapses, this novel reads like a rendition from another time. This is work that no upstart village teenager could have written all by himself.


But Elias Machemedze’s elder brother could not have it! He could not tolerate a younger brother who killed precious time scribbling and claiming to be a writer. How can you claim to be a writer when you should be in school, he ranted at Elias. You cannot afford to lose your way when I am still around, he promised. In a fit of rage, he tore Elias’s whole script to pieces! Writers do not come from the villages and the nook, he reasoned. In no time, the young Elias was running for dear life.


Not to be outdone, Elias did not run far. He resorted to the bush and the nearby Kakomo Kembada hill to brood and be ill for some time. Here, he would secretly resuscitate and finish the Sarawoga script, far away from the prying eyes of his elder brother. At every stage, Elias would however come down the hill and surreptitiously show his work to his teacher at Zvomanyanga Secondary School, one Enock Kalani. He got the much needed approval. He would then walk home and pretend to be normal and yet, he was so inspired that it hurt!


In due course, the script was published into a novel by Priority Projects Publishing in Harare in 2004. It later became a school set text, to be read and studied across Zimbabwe. The life of a celebrity began for Elias Machemedze. The village was stunned. Later, when Oliver Mtukudzi adopted Sarawoga into a feature film that appeared on Zimbabwe television and even made a song based on it, the villagers were speechless.


Elias continued to till the lands and to herd cattle. He continued to write. Despite his youth, he continued to accompany his father into the mountains and the villages to consult the svikiros over various matters. Apparently, the Machemedzes belong to the Chipadze chieftainships who are the original rulers of the present day neighbourhood of Bindura. That is why Sarawoga has names of rivers and hills in present day Bindura town. Because of the constant touch with the spirit mediums and seers, Machemedze became familiar with various lore, far beyond his age. In his works, the spirits of the land proselytise at length. In his speeches and in ordinary conversation, Machemedze speaks like an oracle, animated and definitive.


Machemedze’s second novel is called Nherera Zvirange. It is another heartrending old world story about a banished orphan who fights against all odds to reclaim his father’s throne. Before that he falls in and out of trouble many times. He leaves home to stay in the bush and troops are despatched in order to catch him. Here are crude military strategies that keep the reader on the edge of the precipice.


Elias says when inspired, he writes very furiously, not caring about method. Afterwards, he puts the papers aside for some time and goes fishing in Mukwari or Gwetera rivers, returning only much later to perfect the script. Sometimes he visits the locations on which his stories are set so that he remains in touch with the space and time of his stories. Terrain means a lot to Elias.

He is following closely in the footsteps of Patrick Chakaipa and Francis Mugugu who wrote about the Shona people in the pre-colonial times. He says he enjoys writing about power because that is maybe one of the oldest subjects around and he is royal himself. He has numerous manuscripts that he will release sparingly because, as he says, "It is getting to be too fast out there!"


With the help of partners, Elias Machemedze is in the process of establishing his own publishing company; Pangolin Publications. He hopes to work with and publish young writers who are in circumstances as his. Here is an example of a writer who writes from amongst the people about the people’s enduring traditions. He says that whenever he meets his readers, they seem to wonder if he is the real Elias Machemedze. He also wishes to get married and become settled one day.
Posted by kwaChirere at 8:22 AM