Now... the longest novel by a Zimbabwean! 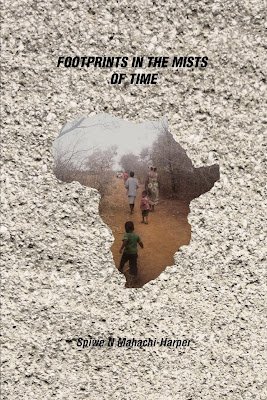 
Spiwe Mahachi-Harpers’s new novel, Footprints in The Mists of Time, boasting of a whopping 181 008 words, is now the longest novel by a Zimbabwean! It is a show of sheer immense narrative tenacity and talent. This outruns Wellington Kusena’s novel of 2011;  Dzimbabwedande, which is the longest Shona novel at 108 264 words.


Footprints  is a 419 broad paged historical novel based on the life and times of generations of migrant African labourers who settled in Southern Rhodesia; before it became Rhodesia and subsequently Zimbabwe. This is a welcome alternative to dry history that tends to work with facts, maps, figures and diagrams.


This book traces about four generations of workers of Malawian origin, beginning with Bhaureni Nyirenda’s journey from Nuhono village in the Nkotakhota District of then Nyasaland in 1899 to settle at Southern Rhodesia’s Patchway Valley Mine in Gatooma District. You move from Bhaureni to his son Masauso, through to grandson Chakumanda and great grandson, Mavhuto (in the present day) and their wives, children and neighbours who are variably from Northern Rhodesia and Mocambique.


Their voices talk about the treacherous journey from Nyasaland to Southern Rhodesia on foot, drifting slowly in different droves and waves of various sizes. This is a story about the oppression of people and their consistent dehumanisation on the farms and mines, leaving the conscious reader with a suggestion that Africans have travelled a very long road of suffering.


This book reminds me most of Alex Huley’s Roots, that well known saga of an African family in American slavery, in demonstrating that all people displaced by capitalism become chattels and not humans. And the process of being turned to an animal begins when your tormentor make you doubt the humanity within yourself.


Pushed out of his village by the desire to work and be able to return and pay taxes, Bhaureni Nyirenda realises while in Southern Rhodesia that: “ I was nothing and nobody but just a lifeless limb detached from the rest of the body. There in the village (Nyasaland) I also left behind my soul, without which I felt empty and hopeless, like a piece of dead wood cast adrift in a river and left at the mercy of the forces of nature, to sink or float.”


He leaves behind a wife and children and is never able to return to them even when he thinks he might return soon and very soon. The Southern Rhodesian mine system sucks him, never giving him enough to survive and retrace his steps. The return journey would be as tragic as the first journey because one does not want to return with nothing to show. And as shown in this story the release of the 'aPhiri Anabwera' song does not help matters.


On the other hand, the migrant labourer is reminded by the indigenous Shona people and ironically, the white man, of not belonging to Southern Rhodesia. They are mabhurandaya or mabwidi who come from the compound and no sane person should befriend or marry them. All they do is get marooned here and shed tears when homesick. They sweat in the mines and suffer to death from the dreaded respiratory diseases from the dusty underground. Their destiny is the mine cemetery which is just a junk-heap.


This novel reminds me of Edward Kamau Brathwaite’s poetry in The Arrivants and Mother, in demonstrating that all displaced people survive on memory stored in both the mind and the genes. The migrant community re-enacts home through language and culture. Their stock names are meaningful: Ganisani, Chimwemwe, Mavhuto, Masauso, Mpinganjira, Chakumanda and others. Knowledge is handed down from father to son and the mine compound becomes encyclopaedic.


Towards the end of the four generations, there is a search for roots. A dying grandfather says to a grandson: “The urge to journey back to Malawi is much stronger now than when I was younger…You, Mavhuto, can retrace the footprints of your great grandfather back to the warm heart of Africa (Malawi)… only animals fail to trace the trail of their births through the ages. Do not misunderstand me and imagine that I wish you to go and bury yourself in some remote rural village in Nkhotakhota. Far  from it. I just wish you to go and reconnect with the land of your fathers and lay to rest the souls of the dear departed who mourned everyday for their loved one until they too died in despair. After that you can go and settle anywhere you wish beyond the horizon”


And then he makes an even bigger argument: “I am very proud to be of Malawian origin but I think those of my people who have been here for close to four generations should no longer be regarded as foreigners as if they are expected to pack their belongings…they have been here…going round and round in circles…”


This massive book asks you to read slowly; forward and backwards to cross check on a name and to clarify a date or a relationship.  It is going to be an important novel for Zimbabwe, Zambia, Mozambique and Malawi.  Zimbabwean fiction itself rarely puts the immigrant and his off springs at the centre of the narrative. Because their general impoverished condition stems from the days of colonial conquest, these people have participated in many liberation movements in the region. Their names were found within the ranks of Zanla, Zipra, ANC and other such organisations. Their role in the politics, sports and arts of the region is very difficult to ignore. Now, here is a novel written solely from their point of view.


Footprints is Spiwe Mahachi Harper’s third novel after Trials and Tribulations and Echoes In The Shadows. The author is a trained teacher and holds a degree in French Culture and Civilisation. Currently, she stays in the United Kingdom, dividing her time between Zimbabwe and that country.

Posted by kwaChirere at 4:07 AM