How Sam Mtukudzi came to play the guitar 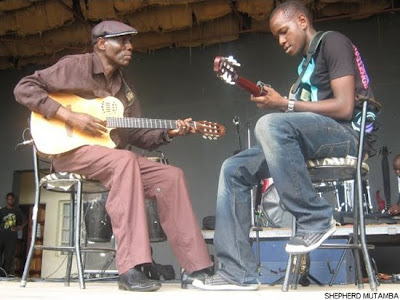 Picture:Oliver and Sam Mtukudzi performing together.

Afraid that his father would disapprove of his desire to become a musician, Sam taught himself to play in secret, sneaking the use of one of his dad’s guitars when Oliver was traveling. Asked to perform at a school concert, he again “borrowed” the guitar without permission, only to look up while on stage and realize Oliver was sitting in the audience. Sam’s story gives a glimpse into the heart of this joyful, talented, and dedicated young man who was taken far too soon. Below, Sam Mtukudzi tells JENNIFER KYKER of Tariro Hope Organisation on http://tarirohope.wordpress.com about the day his father saw him play the guitar in public for the first time.

“I remember: I think I was about ten. I was asked to play guitar at my primary school’s Christmas carols concert night. I had been learning how to play this instrument for like five years, you know? And now I was ready to do performances. I had been performing in small chapel services back at the primary school. So, you know, my headmistress and the music people there knew that I could play guitar. So when this concert came up, they asked me, “Can you use your instrument?” I didn’t officially have an instrument. You know, I just used to pinch my dad’s guitar that he just used to always leave at home. So, I asked for transport from the school. So they actually gave me the school’s minibus. We went off to the house, took that guitar, and a little amplifier, just a little combo, loaded it up, went to school. In about a week from then- you know, my dad had been out, so he had just come back. Well, I didn’t know that the school had sent invites to the parents back at home for all the boarders! So, my parents got their invite. So… they came to the concert. We played. It was beautiful. When my time came to actually do my ultimate performance, I hadn’t seen my parents or anything, so I stand up there, and then I play. When I’m done with the performance, I’m taking a bow and I’m thinking, that guy looks like my father. And oops, the woman who’s sitting beside him looks like my mom! You know, I walked back stage, and, I’m there and I’m thinking, “What if it is?” You know? What if it is them? And everyone is clapping, clapping, and it was the last song. We get dismissed, we go outside, and, you know, there I am, I’m carrying my stuff back to the dorm and I’m bumping into my dad, thinking, “Hi dude.” And he actually didn’t react in any negative way. He was quite surprised, he was thinking, when did I start learning? How did I get there? I mean, you know, I was playing and singing at the same time! How did it happen? You know? So he’s like, “No, no, well done, well done, well done. Since you didn’t have a guitar, that one’s now yours.” And I was like, “Whew! Thank you! Thank you!” I was really happy. That was my first instrument, and, you know, it was an honor to have.”
Posted by kwaChirere at 9:27 AM