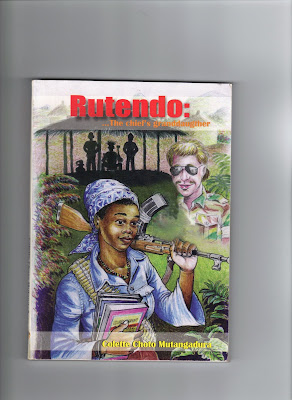 Rutendo, the most promising daughter of the village comes home on holiday from a whiteman’s college to find her grandfather, the chief’s homestead guarded by white soldiers. It is during the bitter war of liberation in Rhodesia.

Suddenly Rutendo's romance with the liberation movement in the village seems compromised as her heart wonders off into a white soldiers’ tent. She falls in love with the white soldier, Barry!

Rutendo is in a dilemma. What will the village say? What will her grandfather, the chief say? What will the other black vigilante youths (vanachimbwido navana mujibha) say? Does she proceed to join the struggle or marry the white soldier and be ostracized by both the black and white communities of Rhodesia?

This novel works around the notion that love knows no barrier. Meanwhile, Barry comes dangerously closely, visiting Rutendo’s bedroom hut, going into the forest with her to pick fruit and follows her up to college with groceries. He is obsessed with her. He has never seen such beauty among the white folk.

Ironically Rutendo’s famous grandmother Ngonya had an affair with one Jan, a white man who impregnated her with a coloured child. Jan didn’t ever care to see either Ngonya or the child.

Published in several anthologies mostly by Zimbabwe Women Writers, Collette Choto Mutangadura was born on 19 March 1945 in Hwedza and has a lot of work accredited to her name. Mutangadura’s first novel Rinonyenga Rinhwarara – ‘A beggar humbles himself’, published in 1983 by Mambo Press in association with the Literature Bureau is another love story. The author is one of the founders of Zimbabwe Women Writers (ZWW). Formed in 1990, (ZWW) is an arts and culture trust, concerned particularly with the promotion of women’s literature in Zimbabwe.