The Interim Committee of the proposed new umbrella writers organization of Zimbabwe, in line with the mandate granted to it on 27 August 2010, is inviting you all writers who have been supportive of this initiative from the beginning as well as all other willing writers of Zimbabwe to a meeting on 4 December, 2010 at the Zimbabwe Film and Television School of Southern Africa at 57 Mazowe Road, Harare (Close to Parirenyatwa Hospital and opposite The Sudanese Embassy) from 08:30:00hrs to 13:00hrs. 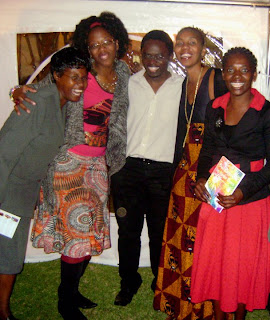 (Photo: Some Zim writers)
The major business of the day will be (a)tabling The Draft Constitution for discussion and adoption, b)adopting the name of the organization and c)mapping the way forward.
Background:
On 29 July 2010, on the sidelines of the Zimbabwe International Book Fair (ZIBF 2010) 33 Zimbabwean writers who attended a Workshop at the Zimbabwe German Society to discuss the status of writers and their organizations in Zimbabwe unanimously agreed to form a new national organization that serves to unite the various associations in one voice where their common welfare is concerned. A few notable experiences may serve as useful examples in this regard:
- The Charles Mungoshi situation
- Ruzvidzo Mupfudza’s problem and subsequent death
- The Unicef-Longman Project
- The National constitutional consultative exercise
- Contractual rights with publishers
- National policy on literature in schools curriculum
- National Book Policy Crisis
- Copyright issues
- Other problems and grievances impacting negatively on writers’ welfare.
In the end, a Steering Committee was set up to consult widely with other writers not present, approaching publishers to provide names and addresses of those writers who were not present at the meeting; enquire if individual writers’ organisations would support the idea of a new national writers’ organisation and if so, what kind of organisation they envisaged and report back to plenary on 27 August 2010. On this date an Interim Executive Committee was elected and given the mandate to:
- Draft a constitution for the new organization
- Raise funds for the initial operations of the organization
- Call a General Meeting to for tabling, discussion and adoption of the Draft Constitution
- Registration of the Constitution with National Arts Council
- Go on a membership drive in preparation for Elections of substantive Executive Committee to subsequently take over from the Interim Committee by end of February, 2011.
To this end The Draft Constitution is now in place and will be put before the members during the meeting of 4 December 2010. The agenda is as follows:
ZIMBABWE WRITERS GENERAL MEETING
DATE: 4th December, 2010
VENUE: ZIMBABWE FILM AND TELEVISION SCHOOL OF SOUTHERN AFRICA
57 MAZOWE ROAD, HARARE
(Close to Parirenyatwa and opposite The Embassy of Sudan)
PROGRAMME:
08:30 Arrival and Registration
09:00 Opening Remarks - Dr Rino Zhuwarara
09:15 Minutes of 27th August, 2010
09:25 Introductions and Report Back(Interim Committee)
10:00 Tea Break
10:15 Discussion of Draft Constitution
11:30 Way Forward
1l:45 Closing Remarks - Mrs Tawona Mtshiya
12:30 Lunch and Networking
Yours Sincerely
Primrose Dzenga
(Secretary, Interim Committee.
Members of the Interim Committee: Mr. Musaemura Zimunya(Chairperson), Ms Primrose Dzenga(Secretary), Ms. Beatrice Sithole(Treasurer), Mr. Memory Chirere, Mr Dakarai Mashava, Ms. Karukai Ratsauka, Mr. George Mujajati(Members)

(Photo: Some Zim writers)
Posted by kwaChirere at 8:14 AM